The stock’s fall was cushioned by hopes that Embraer will sell a majority stake in its commercial aviation unit to U.S. aerospace giant Boeing (NYSE: BA) . However, even if Embraer doesn’t manage to complete a deal with Boeing, long-term investors are set to benefit from the pending entry into service of two major new product lines during 2018.

During 2017, Embraer posted revenue of $5.84 billion, down from $6.22 billion a year earlier. Commercial jet deliveries slipped to 101 from a multiyear high of 108 in 2016. Meanwhile, Embraer delivered 109 executive jets last year, compared to 117 during 2016. The lower delivery totals in these two segments caused the year-over-year revenue decline.

Embraer faced even more profit pressure than it had expected due to its lower revenue. Full-year adjusted operating income fell to $397 million from $499 million a year earlier, below the company’s guidance of $450 million to $550 million.

Most of the earnings miss was driven by $50 million of extra costs booked in the fourth quarter, for Embraer’s KC-390 military tanker/transport development program. The executive jet business also continued to face severe margin pressure due to a glut of used business jets on the market. In fact, the defense and executive jet segments both posted roughly breakeven results in 2017, excluding the $50 million charge on the KC-390 program. 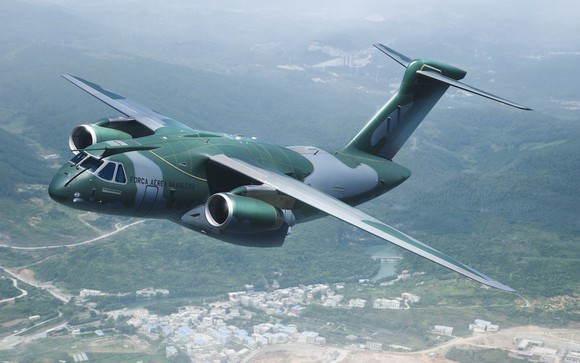 On the bright side, Embraer generated $405 million of free cash flow last year, whereas it had initially expected free cash flow to be negative. A reduction in finished-goods inventory drove this strong result. (Embraer’s entire market cap is less than $5 billion.)

Looking for a deal with Boeing

Embraer stock surged in December, following reports that Boeing was interested in acquiring the company . There’s a natural fit between the two, as Embraer’s commercial jet platforms cover the 70- to 130-seat segment, whereas Boeing is increasingly focused on jets with at least 150 seats.

However, the Brazilian government holds a “golden share” in Embraer that gives it veto power over major strategic moves. Not surprisingly, government leaders have vowed to block an outright sale of the company, as Embraer is the linchpin of Brazil’s defense sector.

Since then, Boeing and Embraer have been trying to reach a mutually satisfactory deal that the government would be willing to approve. Most recently, they have considered creating a third company that would house Embraer’s commercial jet business. Boeing wants to take a stake of 80% to 90% in that company with full operational control, according to Reuters. However, Embraer (and, presumably, the Brazilian government) would prefer to maintain a sizable 49% minority stake in this business.

Selling a majority stake in the commercial jet division to Boeing would bring in a substantial windfall, as this segment has routinely generated double-digit margins in recent years. That said, Embraer also has the tools to be successful on a stand-alone basis.

New products are the key to profit growth

Embraer is set to begin deliveries for two new product lines this year: the E2-series commercial jets and the KC-390 military tanker/transport. These products have the potential to drive strong profit growth over the next five years or so.

There has been plenty of interest in the E190-E2 (and its larger sibling the E195-E2), but for the most part this interest hasn’t crystallized into orders. However, the first E190-E2 delivery is scheduled for early April. Assuming that Embraer achieves a smooth entry into service, it could be a catalyst for new orders — particularly because the aircraft’s fuel burn, range, and takeoff performance all beat Embraer’s previous projections. Considering that Boeing and Airbus will each deliver nearly 700 narrowbody aircraft annually by 2020, there’s clearly upside to Embraer’s recent commercial jet delivery pace of about 100 units per year.

Meanwhile, Embraer’s management noted last week that the KC-390 is an ideal replacement for the C-130. There are nearly 2,700 C-130s in operation, and they are 34 years old on average. Embraer hopes to get a third of this replacement business. Even if it only gets 20% of the market, it would be enough to turn the defense segment into a big profit contributor for Embraer, whereas it has been breaking even (at best) recently.

The executive jet segment doesn’t have a new product bonanza coming. However, Embraer’s management noted that the glut of used jets is finally receding, while the recent U.S. tax reform law has boosted demand. This could pave the way for a gradual rebound in profitability.

2018 is set to be another down year for profit at Embraer. Management expects operating profit to fall to between $270 million and $355 million, as the company starts to transition commercial jet production to the new E2 models. However, if its new products gain momentum, Embraer has a ton of room for profit growth beyond 2018.

10 stocks we like better than Embraer-Empresa Brasileira
When investing geniuses David and Tom Gardner have a stock tip, it can pay to listen. After all, the newsletter they have run for over a decade, Motley Fool Stock Advisor , has tripled the market.*

David and Tom just revealed what they believe are the 10 best stocks for investors to buy right now… and Embraer-Empresa Brasileira wasn’t one of them! That’s right — they think these 10 stocks are even better buys.