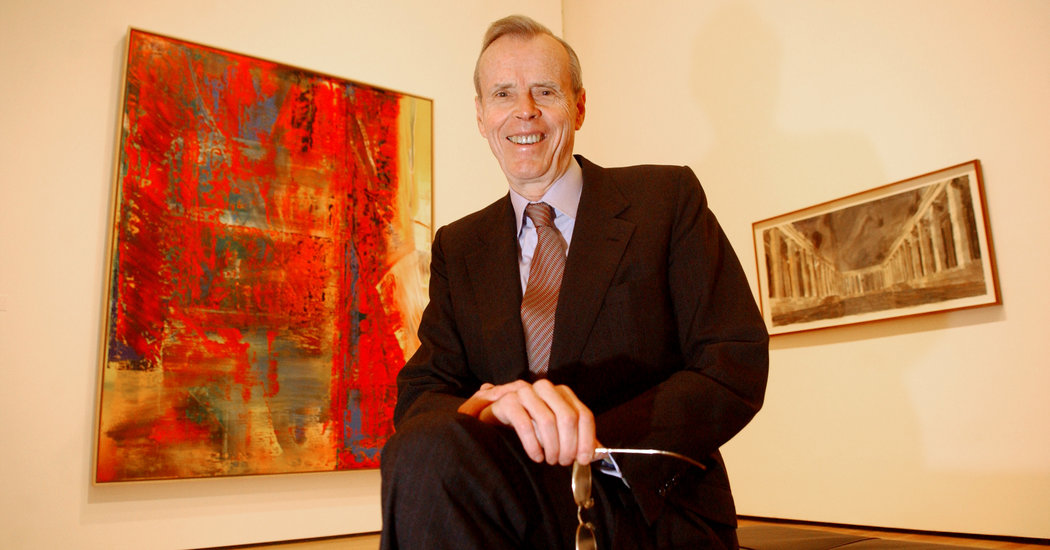 Donald B. Marron, a prominent financier with decades of executive leadership and a major figure in the New York art world, died on Friday in Midtown Manhattan. He was 85.

Catherine Marron, his wife, said he had been en route to a colleague’s holiday cocktail party and was getting out of a car when he had what appeared to be a heart attack.

Ms. Marron said he had only planned to stop by the event for 30 minutes before returning to his home on the Upper East Side to watch a movie with his family.

A lifelong resident of New York City, Mr. Marron was educated in city public schools and attended Baruch College in Manhattan but did not complete a higher degree, Ms. Marron said.

“He was super smart and always had an entrepreneurial spirit,” she said. “He went to one year of college and then left to create his own business and support his mother, brother and sister.”

Mr. Marron, who was 6 foot 6, was an entrepreneurial force who began his Wall Street career as a teenager. He took a trainee’s job for less than $50 a week at the New York Trust Company, which later merged with the Chemical Bank. At New York Trust, which had a significant trust business, he moved into the investment research department and set his sights on future accomplishments.

He was a thoughtful person who knew how to listen, but had a “steely determination” in pursuing power, Bill Moyers, a television journalist, commentator and one of Mr. Marron’s closest friends, told The New York Times in 1987.

In 1967, Mr. Marron served as president and chief executive of Mitchell Hutchins, a research-oriented brokerage firm, and oversaw its transformation from a predominately retail-oriented firm into one of Wall Street’s premier stock research firms. He sold it to PaineWebber Group Inc., an American investment bank and stock brokerage firm, in 1977.

Mr. Marron was a founder of Data Resources Inc., a pioneering economic forecasting firm, with the Harvard economist Otto Eckstein in 1968. The firm became the largest nongovernmental source of economic data in the world, according to an online biography from New York University, where he was a trustee. Mr. Marron served as chairman until McGraw-Hill purchased the firm for $103 million in 1979.

In 1980, Mr. Marron became the chairman and chief executive of PaineWebber. During his 20-year tenure, PaineWebber grew into one of the nation’s largest full-service securities firms, before it was acquired by the Union Bank of Switzerland, better known as UBS.

When UBS and PaineWebber merged in 2000, UBS became the world’s largest wealth manager, according to the New York University biography. Mr. Marron was named chairman of UBS America, a position he held until the early 2000s.

“There were other companies that came calling for PaineWebber, but he waited until he got a company that could really take care of the employees,” Ms. Marron said. “That shows who he was.”

He attended public schools and Baruch College, then the Baruch School of City College of New York, but left college with almost enough credits to graduate at age 17, when most students were just finishing high school.

“He’s always loved art,” Ms. Marron said. “He started collecting Hudson River School paintings when he was young and had no money.”

In 1975, Mr. Marron became a trustee of the Museum of Modern Art and a key figure in the museum’s expansion in the early 1980s. He was elected president of the museum’s board of trustees in 1985.

Ms. Marron said she met Mr. Marron at a cocktail party held at the museum; they were married in 1985. She later served as chairwoman of the New York Public Library and co-chairwoman of the High Line, and was a contributing editor at Vogue magazine.

Mr. Marron spent more than three decades compiling a vast collection of postwar art that included seminal paintings, drawings and sculpture by Andy Warhol, Roy Lichtenstein, Lucian Freud and Jasper Johns, among others. As a supporter of art in the workplace, Mr. Marron lined the walls of UBS PaineWebber’s offices nationwide with works from his collection.

“We all spend probably a third of our lives in our offices,” Mr. Marron told The Times in 2005. “Therefore, if you can expose us to another aspect of creativity in our time, it’s a good thing, particularly in the securities business.”

Mr. Marron donated part of the UBS-owned collection — which was valued at about $15 million — to the Museum of Modern Art, where it was exhibited in 2005.

As the art market exploded in recent years, attracting dabblers and speculators, Mr. Marron remained an old-fashioned collector — passionate about the art itself, rather than looking to flip it for a profit or impress visitors to his home.

Recently, he opened his own private gallery in Midtown Manhattan, which he filled with major works from his own collection. He had no interest in making it public, however, and enjoyed time spent among the works on his own or with friends.

He developed personal relationships with the artists he collected, like Brice Marden, Ed Ruscha and Mark Grotjahn. He brought his grown son with him to auctions and was constantly on the lookout for new pieces, employing a personal art adviser, Matthew Armstrong, to help him with the scouting.

Mr. Marron was also a philanthropist and active in government and public policy. In addition to being a trustee of New York University, he was a member of the Board of Overseers and Managers of Memorial Sloan-Kettering Cancer Center and a director of the Partnership for New York City, and also was involved with the Coalition for the Homeless, according to the New York University biography.

Mr. Marron was a member of the President’s Committee on the Arts and Humanities, the chairman emeritus of the Center for the Study of the Presidency, a member of the Council on Foreign Relations and a trustee of the Center for Strategic and International Studies, where he helped developed the framework for Social Security and pension reform legislation, according to the biography.

He was also a former director of the New York Stock Exchange, governor and vice chairman of the Securities Industry Association and governor of the National Association of Securities Dealers, according to a biography on Lightyear Capital’s website.

Mr. Barron is survived by his sister, Carol Ray; his brother, Kenneth Marron; his wife; their two children, William Marron and Serena Marron; and two children from a previous marriage, Jennifer Eldridge and Donald Marron Jr., an economist who served on the Council of Economic Advisers during the George W. Bush administration.