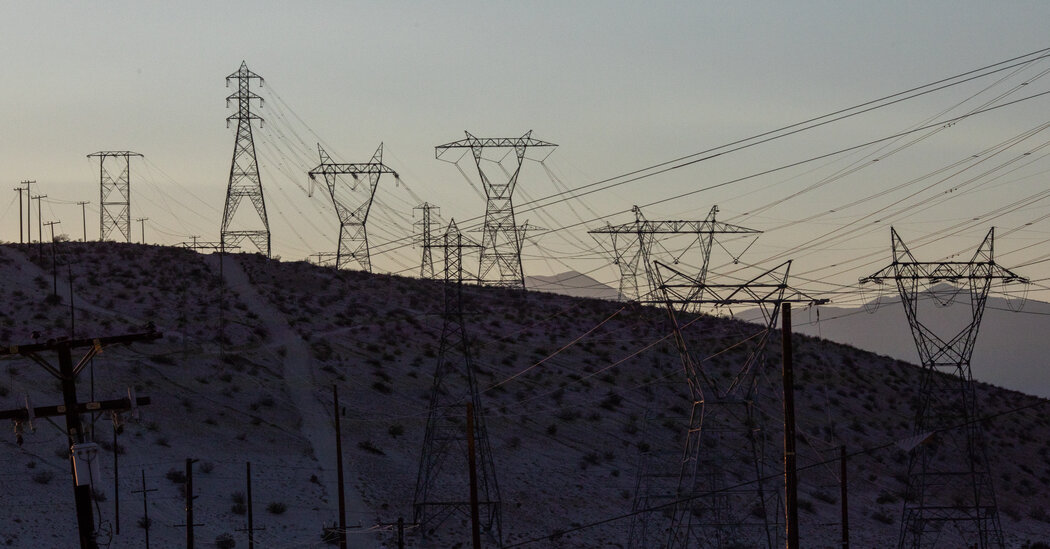 California finds itself on edge more than ever with a lingering fear: the threat of rolling blackouts for years to come.

Despite adding new power plants, building huge battery storage systems and restarting some shuttered fossil fuel generators over the last couple of years, California relies heavily on energy from other states — the cavalry rushing over a distant hill.

Sometimes the support does not show up when expected, or at all. That was the case this month, when millions of residents got cellphone alerts urging them to cut their energy use as the state teetered close to blackouts in blazing heat.

“Weather volatility wreaks havoc on energy systems,” said Evan Caron, a 20-year veteran of the energy industry as a trader and investor who handles venture investments for Riverstone Holdings, a private equity firm in New York. “They’ve created complex systems to help try to figure out how to balance demand, but the system is an imperfect system.”

Where local utilities once produced, transmitted and delivered electricity to their customers, a cast of players now orchestrates the service in most areas of the country. There are power plant owners, energy traders who buy and sell excess power not committed in contracts, utilities that deliver electricity to customers, electric grid managers who coordinate it all.

California’s grid is connected by transmission lines to other Western states and Canadian provinces, allowing it to import and export power. Like any big marketplace, the system has advantages of scale, allowing resources to be redirected to where they are needed. But California’s experience has revealed a number of vulnerabilities — in the system’s design and in the region’s generating capacity — that create the potential for failure.

The transition away from fossil fuels has complicated energy operations, as an increasing share of electricity is coming from solar and wind farms that produce power only when the sun shines or the wind blows, making the available supply more variable over a 24-hour period.

Part of President Biden’s strategy to reduce emissions and counter the effects of climate change is to increase the delivery of clean energy from one area, state or region to another — say, from Wyoming wind farms or Arizona solar farms to California homes and offices — an effort backed by hundreds of billions of dollars in this year’s Inflation Reduction Act and other measures.

But until those plans yield a significant increase in energy generation and transmission, grid managers like the California Independent System Operator, or CAISO, which runs 80 percent of the state’s electric system, must depend on and compete with neighbors for what is sold in energy markets. That means California risks falling short during periods of peak demand, like the one it experienced on Sept. 6.

With temperatures soaring throughout the West, CAISO faced rising prices in the regional market that it operates to buy and sell energy. As electricity demand kept increasing, so did prices, some to almost $2,000 per megawatt-hour, compared with normal prices of less than $100.

“Where the risk comes is if we can’t get our prices high enough compared to the rest of the West to get any imports,” said Carrie Bentley, the co-founder and chief executive of Gridwell Consulting, which focuses on energy markets in the West. “Prices in the desert Southwest were a little higher, so we were competing with them. There just wasn’t enough supply.”

Coping With a Crisis

As Sept. 6 arrived, Elliot Mainzer, CAISO’s chief executive, knew he was facing one of his organization’s toughest days.

Its meteorologists, along with those at the National Weather Service, were forecasting record heat. With overnight lows in the 80s in much of the state, it did not take long for temperatures to surge back into the 100s, with Sacramento setting a record high of 116 degrees.

Just before Mr. Mainzer and a hundred other people from utilities, smaller grid operators and emergency services got on a 9 a.m. call with Gov. Gavin Newsom’s office, CAISO’s forecasters were projecting the highest demand the system had ever seen, 51,276 megawatts. The peak, set 16 years earlier, was 50,270.

“We were seeing that there were going to be some significant shortfalls,” Mr. Mainzer said. “It’s not just the demand and the heat, but wildfires, smoke and cloud cover were affecting the system.”

About 2,000 megawatts of natural gas units — enough to power almost 1.5 million homes — were offline or operating at less than their full potential.

One problem was that natural gas plants become overly strained in extreme heat. The Ormond Beach Generating Station, a 51-year-old gas plant an hour’s drive up the coast from Los Angeles, was repeatedly forced offline in the early days of the heat wave. Now, the plant’s output was nearly at capacity, although it had not reached 100 percent.

“The sheer temperatures that were going on outside just kept pushing the load,” Mr. Mainzer said. “It was just going up and up and up. We’re also facing sunset.”

That meant the supply of solar power was about to drop off rapidly, and the grid operator was running out of backup tools.

About 5:17 p.m., the highest of three emergency alert levels was declared, and CAISO told utilities to prepare to cut off power to hundreds of thousands of customers.

At 5:40 p.m., CAISO informed Mr. Newsom that “we were deep into the emergency,” Mr. Mainzer said. “That was where we were, one step away from rotating outages.”

Taking a drastic measure, Mr. Newsom ordered emergency warnings to be sent to 27 million cellphones in areas of high demand, like Los Angeles. The messages urged people to avoid nonessential power use, keep thermostats no lower than 78 degrees and charge electric vehicles only at night, after demand recedes.

In minutes, electricity use dropped more than 2,000 megawatts — or the production capacity of two large power plants.

Even as California was facing record demand, its power lines were sending power to other parts of the region, in some cases to fulfill contracts between producers and utilities. At moments during the day, more than 5,000 megawatts of electricity were exported through CAISO’s system for hours at a time, according to Tyson Siegele, an analyst at the Protect Our Communities Foundation, an advocacy group for energy issues.

Even with the exports, the state imported more power that day than it shared, with a net that never fell below 4,000 megawatts, according to Ms. Bentley of Gridwell Consulting.

Still, Mr. Mainzer is aware of the optics of the exports at such a critical time.

“I think we’re kind of terrified,” Mr. Mainzer said, “that we’re going to be criticized that we were doing exports.”

The Search for Solutions

State and federal lawmakers and regulators acted to guard against future manipulation, price volatility and rolling outages, but those steps did not eliminate the uncertainty and risks inherent in financial markets, including wholesale energy markets.

What Mr. Mainzer described as a system of neighbors helping one another in a crisis is also, in practice, a competition.

In a review of this month’s emergency by Gridwell Consulting, Ms. Bentley determined that California was receiving all the electricity it could purchase from the Pacific Northwest as well as hydroelectric power from British Columbia. The additional electricity would have to come from the Southwest, but California’s wholesale price limits made it difficult to compete with Arizona and New Mexico, where wholesalers could get more money for their electricity.

“There was nothing any of the other states could give us,” Ms. Bentley said.

Jon Wellinghoff, a former chairman of the Federal Energy Regulatory Commission, believes CAISO and California regulators need to spend more time getting their forecasts right. Markets are the most efficient way to manage energy supplies across states, he said, but without proper planning electricity becomes too expensive.

“Yes, there weren’t any rolling blackouts in California, but at what cost?” he said of the recent emergency. “What was the total cost to consumers in California?” There is, as yet, no authoritative answer.

Even absent an emergency, Californians have been acutely affected by higher electricity costs, reflecting regulatory requirements for utilities to do more to prevent their equipment from causing wildfires as well as the need for more power plants and energy storage to meet the growing demand. The typical customer in California paid about $290 a month for 1,000 kilowatt-hours of electricity in June compared with $154 for the average U.S. resident, according to the Energy Information Administration.

Mr. Wellinghoff believes that part of California’s problem can be solved by changing the way electricity is managed in the West. CAISO runs an energy trading market across multiple Western states but controls only California’s electric grid.

In addition to a regional trading market, Mr. Wellinghoff wants a regional electric grid operator rather than individual operators in separate states — an idea that has met stiff opposition in the past because CAISO’s board is appointed by California’s governor and other states do not want their outsize neighbor dictating policy. For California’s part, some officials have not wanted to surrender control of their grid manager to smaller states.

But Mr. Wellinghoff said a regional grid manager could better distribute resources without depending on the energy market alone to deliver power from area to area.

“Broader authority will produce benefits immediately,” Mr. Wellinghoff said. “The system needs to be made more efficient. We could have been in a better position, yes.”

Mr. Mainzer said his staff would have to review the data from the Sept. 6 emergency for more details about power plant performance and imports and exports, but California did help neighboring states affected by the extreme heat, Nevada in particular, just as other states provided support to California. The bigger concern, he said, is the need to adjust for the evolving demands that climate change is placing on the electric grid, including by improving planning.

“We’re having to update our resource forecasting,” Mr. Mainzer said. “The past is no longer the predictor of the future.”