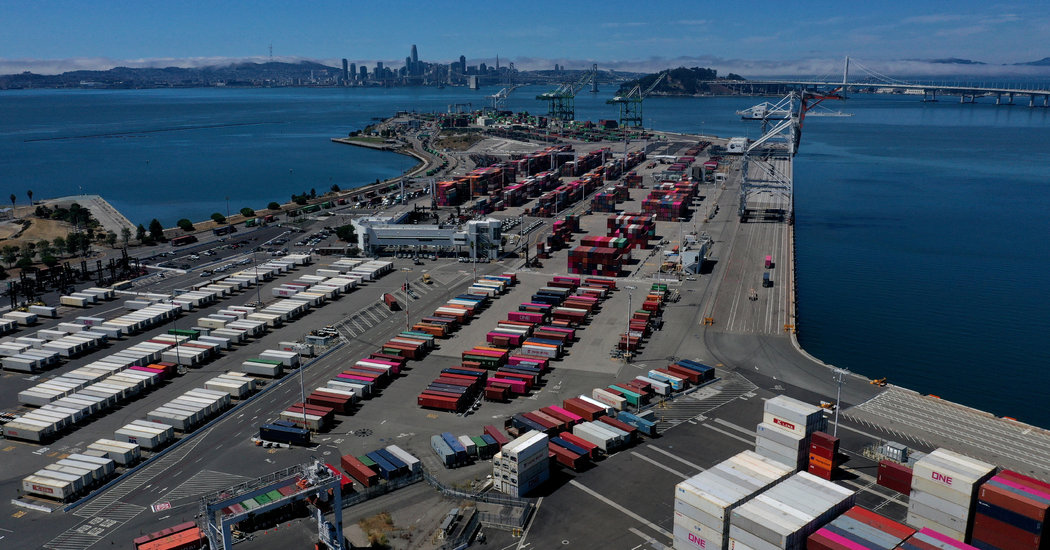 SHANGHAI — The combination on Friday of tough words from President Trump and the cancellation of a planned trip by Chinese agriculture officials to two farm states seemed to cast a cloud over prospects for a trade deal and caused a sell-off in New York stock trading.

But both sides moved on Saturday to indicate that the negotiations continue.

China’s state-run Xinhua news agency said on Saturday that fairly senior negotiators had “conducted constructive discussions” in Washington in recent days and had “agreed to continue to maintain communication.”

The tone of the Xinhua statement was matched by a separate statement from the United States trade representative in Washington. “These discussions were productive, and the United States looks forward to welcoming a delegation from China for principal-level meetings in October,” the statement said.

Both sides’ trade negotiators have continued to look for a resolution of their differences even as tensions ratcheted ever higher over the summer, several people familiar with the trade talks said. All insisted on anonymity, citing diplomatic sensitivities in the negotiations.

The delegation of Chinese agriculture officials that had planned to travel to Montana and Nebraska in the coming week didn’t cancel the trip because of any new difficulty in the trade talks, two of these people said. Instead, the trip was canceled out of concern that it would turn into a media circus and give the misimpression that China was trying to meddle in American domestic politics, one of them said.

The Chinese government has long taken the position that countries should not interfere in each other’s domestic affairs, a position developed partly in opposition to foreign criticisms of China’s human rights record.

In recent weeks, the Chinese government and many Chinese internet users have also reacted angrily to calls by American officials for Beijing to show restraint in responding to increasingly violent pro-democracy protests in Hong Kong. China’s foreign ministry has repeatedly objected to what it describes as intervention in China’s internal affairs over Hong Kong.

The question now is whether Vice Premier Liu He of China can make any progress when he comes to Washington for high-level talks next month. While the dates for those talks have not been confirmed, they look likely to be scheduled for Oct. 10 and 11, said two of the several people familiar with the trade talks.

The biggest obstacle facing negotiators may be agreeing on the scale and ambition of any deal they try to reach. Several people familiar with the trade talks said in interviews over the past two weeks that China wanted to reach a partial deal that would head off President Trump’s planned increases in American tariffs on Chinese goods on Oct. 15 and Dec. 15.

China has become more wary in recent weeks of seeking any comprehensive resolution of the dozens of issues facing the two countries. Chinese negotiators have tried to focus the talks on issues that can be resolved through regulations that the country needs to issue by early January anyway in response to a new law on foreign investments the National People’s Congress approved in March.

At the same time, Chinese trade negotiators have tried this week to exclude issues like data flows, the location of data and the setting of cybersecurity standards. These issues tend to infringe on the turf of China’s feared internal security agencies, which have resisted any limits on their ability to conduct comprehensive surveillance within the country and are wary of allowing in American tech companies.

The United States has tried to persuade Beijing to adopt broad changes to Chinese laws to make the country more open to imports and to limit subsidies for industries, particularly advanced manufacturing industries that compete with American industries.

But President Trump objected on Friday to any partial deal.

“I’m looking for a complete deal, I’m not looking for a partial deal,” Mr. Trump said on Friday during a joint news conference with Prime Minister Scott Morrison of Australia. “We’re looking for the big deal.”

There have nonetheless been some discussions between the two sides on reducing American tariffs that would only apply to Chinese goods worth $250 billion a year. That would be instead of the current tariffs on goods worth $360 billion a year, which are set to increase even further by mid-December, people familiar with the talks said.

The United States has been pressing China to buy more American food in exchange — food that China may need as an epidemic of African swine fever has killed huge numbers of pigs in China.

The two sides have nonetheless undertaken a series of small, confidence-building trade measures in the past two weeks. Each side has removed tariffs from a series of items, like Christmas tree lighting sets from China and pork from the United States. China has also agreed to purchase some soybeans this autumn.