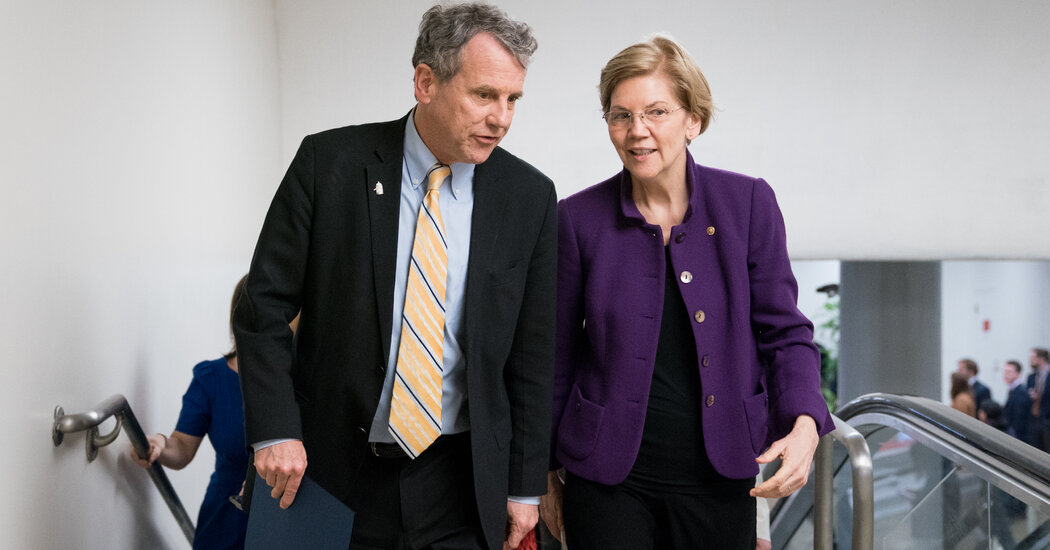 Two Senate Democrats sharply criticized the Federal Reserve’s effort to get Congress to help it weaken capital requirements for big banks this week, following a report in The New York Times that Republicans were hoping to include such a provision in the next coronavirus relief package.

In letters to Federal Reserve Chair Jerome H. Powell and Vice Chair Randal K. Quarles, Senators Sherrod Brown of Ohio and Elizabeth Warren of Massachusetts, who sit on a committee that oversees banks and regulators, said the move would make the financial system less safe and help enrich bank chief executives without encouraging their institutions to lend more to Americans hit hard by the coronavirus pandemic.

Banks and Fed officials have said the change is needed to let banks handle the heavy influx of customer deposits owing to the crisis.

At issue is a provision in the Dodd-Frank Act, the 2010 law designed to strengthen bank regulations following the 2008 financial crisis. It prohibits regulators from lowering capital requirements beyond the level at which they were set when the law was passed 10 years ago. Mr. Quarles, who is vice chair for bank supervision and regulation, is now asking Congress to essentially release it from that prohibition.

“Congress wrote this provision to ensure that, even under lax banking regulators, banks could absorb losses in the event of a downturn,” the senators wrote to Mr. Quarles in a letter on Thursday. “Republican legislation now being crafted reportedly contains a broad deregulatory measure that will accomplish the giant giveaway that banks have long sought.”

In a separate letter to Mr. Powell, the senators offered praise for his commitment to the Fed’s independence, but added: “Vice Chair Quarles has not been shy about lobbying on behalf of Wall Street, and it concerns us to learn that Vice Chair Quarles and Federal Reserve staff have been working with Senate Republicans to craft legislation that would undermine financial protections Congress passed after the last financial crisis.”

A Fed spokesman confirmed that the central bank had received the letters.

The Fed has used its existing authority to tweak big banks’ capital rules in response to their claims that the rules are keeping them from doing a wide range of business for their customers right now. In March, for instance, officials reassured the biggest banks that they could continue handing out cash to shareholders — to keep financial markets calm — even if it meant dipping into the capital reserves they were supposed to hold for times of crisis. With the change, the penalty that would normally be placed on them for accessing those reserves would be imposed more gradually. In April, the Fed temporarily loosened another capital requirement for big banks, the supplementary leverage ratio.

The change that Fed officials want Congress to make is similar to the one they made to the supplementary leverage ratio. Under the current rules, banks must count all assets — including relatively safe ones like customer deposits that banks choose to park at the Federal Reserve and in Treasury securities — when calculating the level of capital they must hold against the overall amount of those assets. That helps constrain risk-taking by ensuring banks have enough capital on hand in the event of a severe downturn, when even the safest assets may carry unanticipated risks.

Banks say that treatment is too severe; that U.S. government bonds are not as risky as, say, credit card loans. But backers of the leverage ratio say there are times when even otherwise safe assets can be risky for banks to own.

On Wednesday, when the Fed said the policy-setting Federal Open Market Committee had decided to leave interest rates near zero in an attempt to counteract the economic crunch created by the global pandemic, Mr. Powell remarked in a news conference that the proposed change was similar to those recently made by foreign central banks. He said it would let banks grow their balance sheets and serve customers, and emphasized that it would not be a permanent change.

“I would want it to be explicitly temporary, if we do do it,” he said.