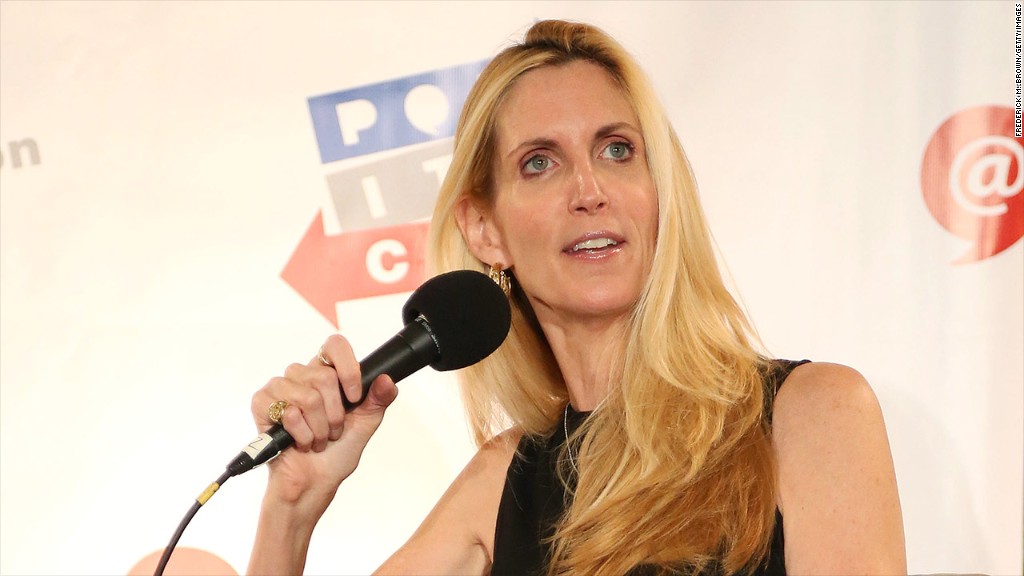 Coulter went off on the airline in a tweetstorm starting Saturday when she was moved from a seat she had pre-booked. The airline said she was moved from the aisle seat in an exit row to a window seat in the same row. But she was upset with the move, prompting a string of angry tweets which have continued for nearly two days.

The dispute quickly went viral on Twitter, and Delta’s response Sunday evening elevated it from a typical celebrity tweet storm to something larger. And in an age when airlines are almost universally reviled, Coulter’s polarizing persona led her many critics to embrace Delta’s response. That only added to the attention the dispute got on social media.

Coulter didn’t just attack Delta — she even attacked the other passenger, who was sitting in the seat she was assigned to sit in. Coulter called her “dachshund-legged” and accused her of being an immigrant, when she tweeted “Immigrants take American jobs (& seats on @Delta).”

Coulter also implied that the problem with Delta gate agents is that they are protected by a union when she tweeted “Does your union hate you, @Delta?”

Does your union hate you, @Delta? Not really worth spending all that money on planes when @Delta gate staff give your seat away.

But Delta gate agents and flight attendants are not members of a union, the way they are at American (AAL) and United (UAL).

Delta (DAL) didn’t initially respond to Coulter on Twitter. In a blog post said it was trying to contact her about her complaints. When the airline did tweet at her, it made it clear that tone of Coulter’s attacks were unacceptable.

Delta apologized that Coulter did not get the seat she had pre-booked, and said it would refund her $30.

But it added, “more importantly, we are disappointed that the customer has chosen to publicly attack our employees and other customers by posting derogatory and slanderous comments and photos in social media. Her actions are unnecessary and unacceptable.”

Related: Delta hits back at Ann Coulter after her tweetstorm over seat mix-up

Many of Coulter’s critics quickly rallied to Delta’s defense.

“I was impressed with your service recently. Most pleasant flights I’ve had in while. Oh and @anncoulter is evil, but what else is new,” tweeted actor Matt Doyle.

I was impressed with your service recently. Most pleasant flights I’ve had in while. Oh and @anncoulter is evil, but what else is new.

“Ann Coulter is having a bad day which makes my day better. Thanks Delta,” another user tweeted.

But there were also plenty of Coulter fans who suggested that Delta had moved her because of her politics. Coulter’s defenders questioned other people on Twitter who were taking the airline’s side.

“She is not making herself a victim, she’s trying to expose the cruelty of airlines and unfair business practices,” said one person.

And there were Coulter supporters who vowed to boycott Delta because of the incident.

“You screw a customer then scold her for not being polite about it? Never flying Delta again. Plenty of other airlines to choose from,” said one user.

You screw a customer then scold her for not being polite about it?

Never flying Delta again. Plenty of other airlines to choose from.

After Delta released its statement, Coulter continued to attack the airline and her critics on Twitter. She suggested that the airline had “SJWs” or social justice warriors, running its customer service and that Delta’s response was “facist.”

“I love @Delta declaring my tweets unacceptable,” she said. “@Delta now dictating acceptable conduct off the plane. NOT fascist at all. #Resist.”

But Richard Painter, a law professor who has been a frequent critic of President Trump’s business conflicts, suggested that Coulter should be put on a “No Fly” list for her tweetstorm.

“Safe skies may require adding another wing nut to the no-fly list. TSA should read these Tweets,” he tweeted.