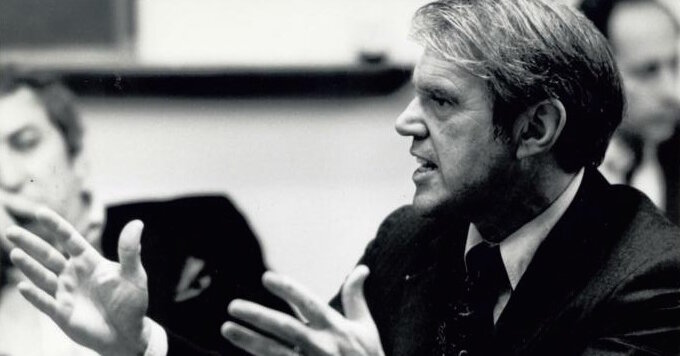 Along with his older brother, Herbert, and his younger sister, Helen, David grew up on Broadway at 110th Street in Manhattan. He began painting at a young age and took to sketching fellow subway passengers on his way to high school in the Bronx.

He and Mr. Ruder, whom he had met when they were 11-year-old Hebrew school classmates, both entered the City College of New York in 1939. When the war began, he joined an Army Air Forces program that allowed him to finish school before joining the ranks. He earned his bachelor’s degree in 1943. By the time he shipped out, however, the war in Europe was over, and he was home in two months.

His sister, Helen, married Mr. Ruder, and she introduced Mr. Finn to Laura Zeisler, a Hunter College classmate. They married in 1945 and had four children, all of whom eventually worked at Ruder Finn.

In 1948, Mr. Finn and Mr. Ruder came up with the idea of using fine art to help companies promote their products. The business they founded, Art in Industry, operated out of a former linen closet in the Lombardy Hotel in Midtown Manhattan. But the idea bore little fruit, and they began to cast a wider net for clients. It was then that an uncle of Mr. Ruder’s introduced them to Como’s lawyer, who hired them to promote his client for $100 a week (about $1,200 today).

While expanding the company, with offices in Midtown, Mr. Finn furthered his involvement in the arts, painting and sculpting on weekends and in the evenings and, in his travels around the world to recruit clients, visiting museums and gardens.

He was 40 when he got his first camera and began photographing the sculpture he saw, becoming so adept at it that he went on to publish or contribute photographs to more than 100 books. (Among his own titles are “How to Visit a Museum” and “How to Look at Sculpture.) Many of his photographs are housed in the National Gallery of Art library.