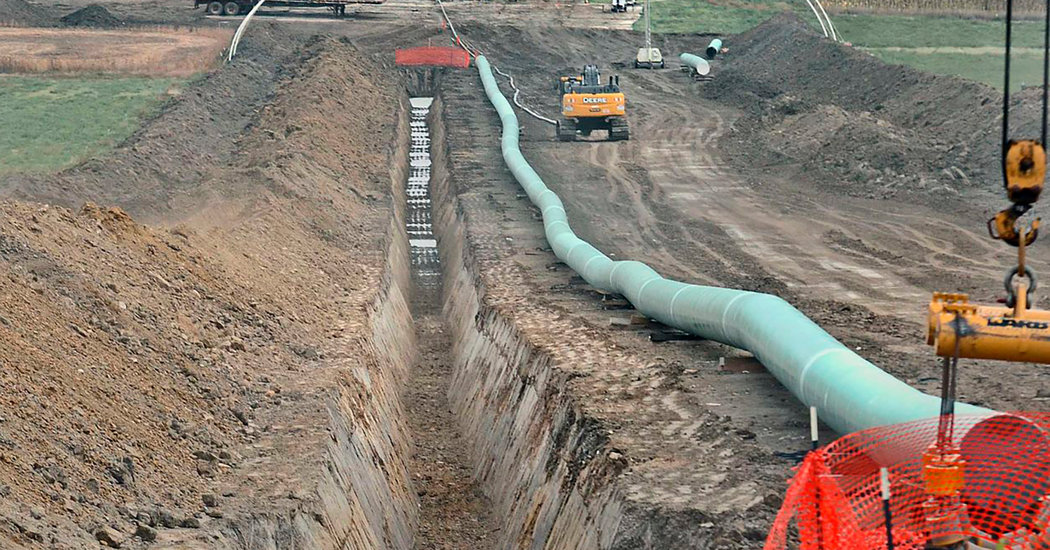 The Dakota Access Pipeline, an oil route from North Dakota to Illinois that has inspired intense protests and legal battles, must shut down pending an environmental review and be emptied of oil by Aug. 5, a district court ruled on Monday.

The decision, which could be subject to appeal, is a victory for the Standing Rock Sioux Tribe and other Native American and environmental groups who have fought the project for years, and a significant defeat for President Trump, who has sought to keep the Dakota Access Pipeline alive.

“This pipeline should have never been built here,” he added. “We told them that from the beginning.”

The ruling, by Judge James E. Boasberg of the U.S. District Court for the District of Columbia, is the latest twist in a long-running legal battle. It essentially vacates a federal permit that had allowed the pipeline to operate while the United States Army Corps of Engineers, which had granted the permits for the pipeline, conducted an extensive environmental impact review.

“It took four long years,” said Jan Hasselman, a lawyer with the environmental group Earthjustice who represents the Standing Rock Sioux Tribe. “But today justice has been served at Standing Rock.”

The pipeline could still resume operations after the more comprehensive review is completed. The Army Corps of Engineers did not immediately respond to a request for comment.

“This is shocking news,” said Ron Ness, the president of the North Dakota Petroleum Council, adding that the pipeline has operated reliably for years, and that the ruling would hurt the state’s economy and encourage other, less safe means of oil transportation.

“I would anticipate that certainly the directly impacted parties — Dakota Access Pipeline owners, operators — are going to look at every opportunity possible for appeal, injunction or stay,” he said.

In his opinion, Judge Boasberg wrote that the court was “mindful of the disruption such a shutdown will cause” but that it had to consider the “potential harm each day the pipeline operates.”

Energy Transfer, the Texas company that owns the pipeline, did not immediately respond to a request for comment.

Craig Stevens, a spokesman for the GAIN Coalition, a pro-infrastructure group, said in a statement on Monday that Judge Boasberg had sided with environmental activists. “Today’s order to shut down Dakota Access jeopardizes our national and energy security and raises significant concerns for the future of American energy infrastructure investment,” he said.

The Dakota Access Pipeline has been carrying oil for three years. In 2016, it was the subject of monthslong protests, and legal battles and political campaigns continued after the remnants of the protest camp were razed.

Members of Standing Rock Sioux Tribe, whose reservation is less than a mile from the pipeline, have long argued that a spill under the nearby Missouri River could pollute the water they rely on for fishing, drinking and religious ceremonies.

They sued in 2016 in Federal District Court in Washington to stop construction and won an early victory under the Obama administration when the Army Corps of Engineers announced it would seek alternative routes.

Four days after President Trump took office in 2017, he signed an executive memorandum directing the corps “to review and approve in an expedited manner” the pipeline. The move prompted rallies outside the White House and Trump International Hotel.

Oil was flowing through the pipeline by June 2017.

In March, Judge Boasberg, who was appointed by President Barack Obama, ordered the federal government to conduct a sweeping new environmental review of the Dakota Access Pipeline. The ruling found that the pipeline’s “effects on the quality of the human environment are likely to be highly controversial,” and that the federal government had not done enough to study the risks of a major spill, or whether the pipeline’s leak detection system was adequate.

He also ordered both the tribe and the federal government to submit briefs on whether the pipeline should continue operating during the new environmental review. The Earthjustice lawyer, Mr. Hasselman, said at the time that the tribe would ask for the pipeline to be shut down until the review was completed. Monday’s ruling granted that request.

“The shutdown will remain in place pending completion of a full environmental review, which normally takes several years, and the issuance of new permits,” Earthjustice said in a statement on Monday. “It may be up to a new administration to make final permitting decisions.”

Judge Boasberg’s ruling is the second triumph in two days for pipeline opponents. On Sunday, Duke Energy and Dominion Energy, two of the nation’s largest utility companies, announced they had canceled the Atlantic Coast Pipeline, which would have carried natural gas across the Appalachian Trail. The companies said that lawsuits, mainly from environmentalists, had increased costs to as much as $8 billion from about $4.5 billion to $5 billion.