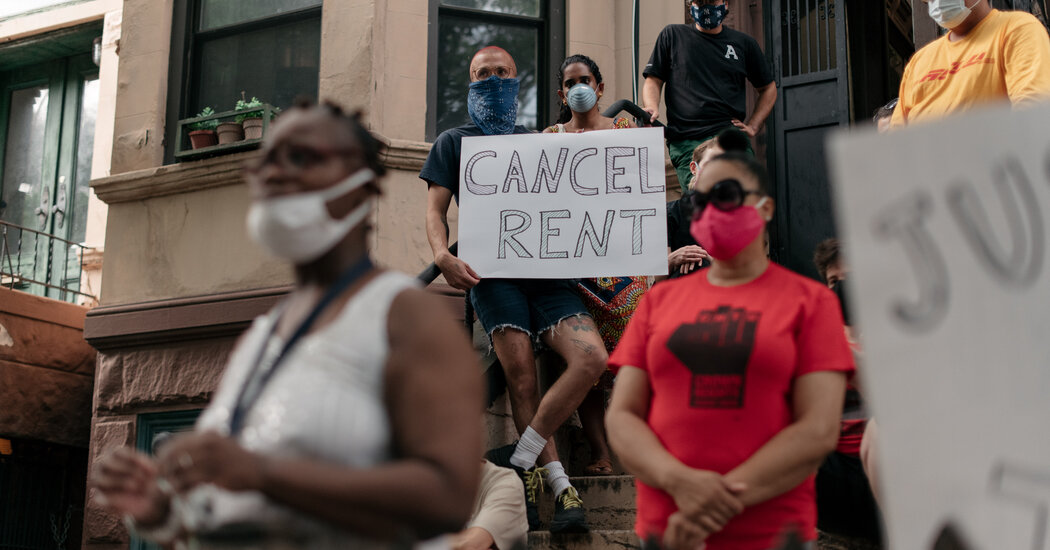 Times Insider explains who we are and what we do, and delivers behind-the-scenes insights into how our journalism comes together.

The federal government’s $600-a-week supplement to unemployment benefits ended on July 31. Talks between the White House and Democrats on new pandemic relief have stalled, and President Trump’s move to continue part of those benefits without congressional action is in legal limbo. Housing experts say that without new federal aid, the nation could face an eviction crisis and the largest disruption to the industry since the Depression. Conor Dougherty, who covers housing and business for The Times, discussed his reporting on the issue in an edited interview below conducted by Emily Palmer. Here are his comments.

Before the coronavirus pandemic, I was writing a lot about housing insecurity. Housing in America has been a problem for decades. One in four tenants spent more than half their income on rent. Younger professionals had no chance of buying a house. We had a million evictions a year and about half a million homeless people. So I was focused on housing in a multifaceted way: Why do our federal programs not cover as many people as they should cover? Why is it so difficult to build lower-income housing?

For many reporters, the pandemic shelved a lot of long-term projects. But for me, the opposite happened. What I had been writing about for years became that much worse. The story was no longer about making housing better but about that most basic thing: How do you keep people from being thrown out of their homes?

Housing experts thought there would be a horrific eviction problem at the beginning of the pandemic, but that didn’t happen because the stimulus measures basically worked. There were problems with it, but the $600 weekly supplement, the $1,200 one-time stimulus and all the eviction moratoriums passed by a large majority of states, the federal government and a ton of cities helped avert a crisis.

But now the net has been moved and people are falling. The question is: Can we repair the net fast enough to catch people?

We are on the cusp of a nightmare like nothing we’ve seen before. This $600 weekly supplemental benefit was the linchpin, probably the single most important thing holding back a wave of evictions. It was the difference between tenants paying their rent or not. Without it, things get dire really fast.

Some experts say 30 million to 40 million people are at risk of eviction. The projections right now are so bad, we run the risk of overhyping it and then not appreciating how bad even a fraction of that could be. If the number of evictions grows to two or three million, that’s still doubling or tripling the current figure.

I actually think the displacement crisis — people simply packing up and leaving — may be worse than the eviction crisis. So looking at only the number of evictions understates the true collapse of housing.

Housing is this patchwork of federal, state and local policy, and a combination of banking and developers. So when you have a housing crisis, it’s hard to figure out the right policy responses because nobody is really in control. If you push on one side of this proverbial balloon, another thing changes.

When it comes to the small players, the landlord story and the tenant story are really one and the same. This mom-and-pop segment of the business owns a lot of what’s called “naturally occurring affordable housing.” If you’re someone with a moderate income who can’t qualify for certain programs, then this is all you can find. If you’re an immigrant, it’s often the only housing you can get.

When tenants don’t pay rent, small landlords are out of business and larger corporate landlords will probably pick up that property. We have lost millions of these apartments over the past decade: A small number of them fell into disrepair or were demolished, but the rest were turned into owner-occupied housing or are not affordable anymore.

When you really start asking longer-term questions — “How do we make housing better?” — it feels as if the solutions are above partisan politics. But that’s more difficult because it rips open our hypocrisies and shows us who we are. It cuts to sociology: “Whom do I want living near me?” And gets to something at our core: People are extremely suspicious of change around them.