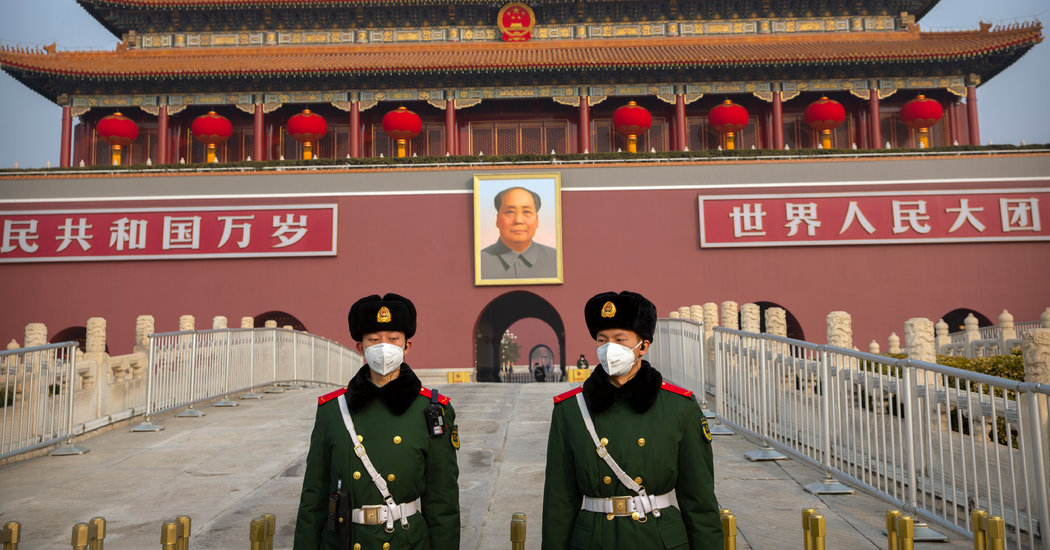 Now a spiraling epidemic has become the latest and potentially most divisive issue driving apart the United States and China. For the fiercest critics of China within the Trump administration, the global panic over the new coronavirus has provided a new opening to denounce the rule of the Chinese Communist Party, which they say cannot be trusted to disclose what it knows or properly manage the outbreak.

But if the hard-liners were hoping for a united, anti-China message coming from Washington, that goal has been undermined by their own leader. President Trump has publicly commended President Xi Jinping’s handling of the crisis and even called for greater commercial ties, including the sale of jet engines to China.

“Look,’’ Mr. Trump said on Tuesday, “I know this: President Xi loves the people of China, he loves his country, and he’s doing a very good job with a very, very tough situation.”

It has become a staple of the Trump administration: sending mixed messages that reflect a good-cop-bad-cop tactic, a real internal disagreement over policy or simply the caprice of the president. But overall, the most hawkish voices on China have managed to dominate the conversation, lashing out at Beijing as it reels from one challenge after another — a trade war with Washington, protests in Hong Kong and now the struggle to contain the coronavirus.

Mr. Trump’s conciliatory comments this week might be an effort to defuse tensions and keep the U.S. economy and stock market humming as he faces re-election. That approach is backed by a pro-trade faction led by Treasury Secretary Steven T. Mnuchin that advocates close ties between the world’s two largest economies.

Whether it is because of the assertiveness of the hard-liners, the ambiguities fueled by the competing messages or Beijing’s policies, the relationship between the United States and China has become so strained and unpredictable that even the need for a united effort to address a global health crisis has not overcome the suspicions that have increasingly taken root on both sides.

Secretary of State Mike Pompeo, the administration’s most vocal China critic, on Tuesday took the country to task for a failure to be open and transparent when the coronavirus hit, saying, “It took us too long to get the medical experts into country. We wish that could have happened more quickly.”

The China hawks say privately that they see the virus weakening the party’s legitimacy and further separating the two countries.

“You are starting to walk back a couple of decades of diplomatic relations,” said Carl Minzner, a professor of Chinese law and politics at Fordham University. The growing friction, he said, “has its own immutable logic that is dragging both countries backward.”

New flash points emerge by the day. On Wednesday, China announced that it was expelling three Wall Street Journal reporters in what it said was retaliation for a headline on an opinion essay. The expulsions occurred a day after the U.S. State Department announced that it would treat China’s main state news media organizations operating in the United States as arms of the Chinese government. All three reporters had worked on topics deemed sensitive by Chinese officials.

The coronavirus epidemic has coincided with recent aggressive moves by Washington that have left many officials in China fuming over what they view as an effort to weaken the Communist Party’s leadership.

Those have included criminal cases filed against Chinese military personnel over the 2017 hacking of Equifax, and accusations that Chinese agencies appeared involved in efforts to get hold of research at Harvard University and Boston University.

The United States has also leveled accusations of racketeering against Huawei, the telecommunications company whose equipment, officials in Washington have repeatedly warned, could be used by the Chinese government for eavesdropping efforts on a global scale.

The Trump administration’s most hawkish officials have seized on the coronavirus epidemic to bolster their arguments that the United States needs to make a more fundamental break with China.

Mr. Trump’s trade adviser, Peter Navarro, said it was “a wake up call” to avoid relying on Chinese production of medicines and other medical supplies. The commerce secretary, Wilbur Ross, said the public health crisis could even lure back manufacturing jobs to the United States.

Allies of the administration in Congress, and even some officials speaking privately, have repeated the fringe theory — dismissed by scientists — that Chinese laboratories, not a wholesale food market in Wuhan, might have been the true source of the epidemic and that it started earlier than Beijing has said.

The officials assert that China at a minimum had obfuscated the fact that the epidemic began sooner than acknowledged and was then covered up.

In China, officials see such statements and actions as evidence of mounting anti-Chinese sentiment, even racism. They also accused the United States of stoking international panic when it withdrew diplomats from a consulate in Wuhan and evacuated its citizens.

Although other countries have since followed suit, China’s foreign ministry accused Washington of setting a bad example.

“It is a political decision in the final analysis,” said Jia Qingguo, an associate dean at Peking University’s School of International Relations.

“It’s time for international cooperation,” he said, “but these people just try to sow hatred, to try to split people up for their own political purposes.”

There have been a few signs of cooperation during the crisis. The U.S. State Department said it had delivered 18 tons of donated medical supplies to China and announced that it was prepared to give $100 million to China and other nations. And Beijing, for its part, has not fully unleashed anti-American vitriol.

“Unlike with the Hong Kong protests or trade war, the Chinese government has not blamed the United States for the ongoing crisis, and has even cracked down on online commentary calling the virus a U.S.-made biological weapon,” said Jessica Chen Weiss, a professor of government at Cornell University.

From the start, the Trump administration has been divided between a pro-trade faction that favors strong business relations with China and a national security faction that promotes the idea of “decoupling” the two economies.

Despite starting a damaging trade war with China, Mr. Trump has tended to side with the pro-trade faction led by Mr. Mnuchin.

Senior officials advocating aggressive policies regularly criticize the trade proponents in private. They blame Mr. Mnuchin, a former Goldman Sachs executive, for blocking efforts to impose sanctions on Chinese officials for the mass detentions of Muslims. They also say pro-business officials are too eager to allow American companies to sell components to Chinese enterprises, especially in the high-tech sector.

Since the two nations reached a truce to the trade war in December, China hawks in the Trump administration have seen an opening to push through tougher actions and policies, ones that were criticized earlier by Mr. Mnuchin and his allies for potentially jeopardizing the trade talks.

Mr. Pompeo has delivered scathing remarks about the dangers posed by China. He told the National Governors Association on Feb. 8 that China was seeking to exert overt and covert influence from state capitals all the way down to community school boards.

He followed that with another speech at the Munich Security Conference this past weekend, declaring that “the West is winning.” On trips this month to Europe, Central Asia and Africa, Mr. Pompeo has told governments to beware of China.

His Chinese counterpart, Wang Yi, retorted in Munich that the West should “eschew the subconscious belief in the superiority of its civilizations and abandon its prejudices and anxieties regarding China.”

The actions and rhetoric coming during the coronavirus epidemic have made the sting even sharper in China.

Chinese officials bristled when the State Department raised its travel alert for China to the highest level — “do not travel.”

In early January, the United States pressed Chinese officials to allow into Wuhan experts from the Centers for Disease Control and Prevention. China ignored the request.

Mr. Trump himself pressed the issue in a phone call with Mr. Xi on Feb. 6, administration officials said. Only last Friday did the Chinese government relent and allow two American experts to join an international team.

Administration officials say China continues to hide significant facts about the epidemic, its origins and its scale. One official said it was important to get American experts to the outbreak’s epicenter to collect reliable data on things like transmission and morbidity rates.

There are already signs that the mutual recriminations could profoundly affect international cooperation — from trade to security to scientific research — as well as popular opinion in both countries.

“The level of trust in the relationship is now cratering,” said Jude Blanchette, the Freeman Chair in China Studies at the Center for Strategic and International Studies in Washington.

“Issues like global pandemics and other issues that fundamentally impact the security of both countries,” he said, “are going to be very difficult to work through given the levels of distrust and disharmony on both sides.”