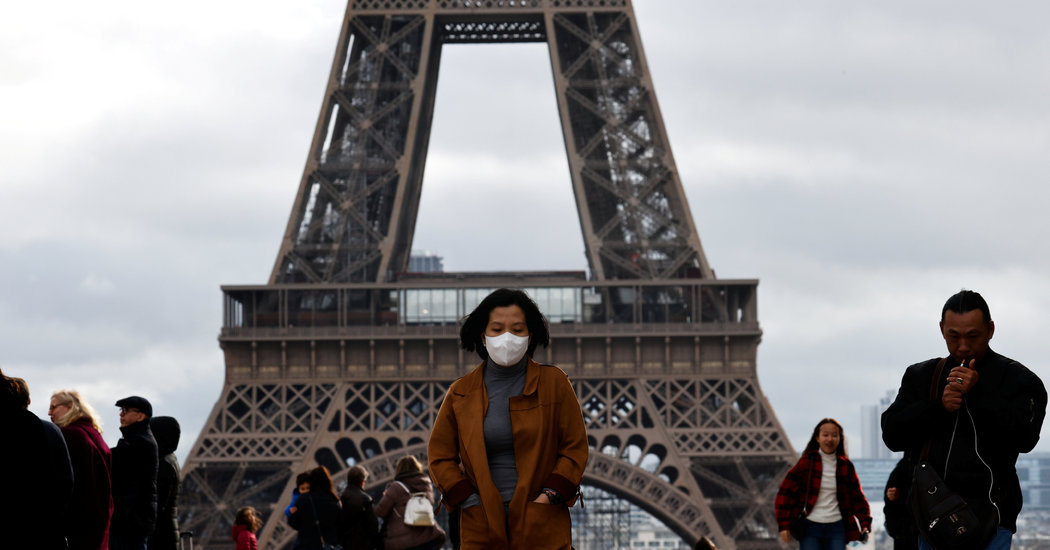 PARIS — The line in front of the Louis Vuitton store was barely a line by Paris standards: only 10 people. All were Asian and many spoke in Chinese, with one couple dictating Mandarin into a smartphone and waiting for the answers in French.

“Sometimes, the line’s been even shorter recently,’’ Yasmine Ben, who works at a kiosk directly facing the store, said on a recent morning. “Usually, it’s wider, much, much longer, and it snakes around the back.’’

Louis Vuitton, in the Galeries Lafayette department store in central Paris, is a favorite stop inside one of the favorite shopping destinations of Chinese tourists to France. And the line there is prime evidence of the growing economic impact that the coronavirus, which broke out in Wuhan, China, late last year, has had on tourism in Paris and elsewhere across Europe.

Though it is too soon to quantify it precisely, the potential economic impact of the coronavirus is evident nearly everywhere. From the streets of Paris to the wineries of Burgundy, from the German town of Füssen near the fairy tale castle of Neuschwanstein to a shopping outlet in Oxfordshire, England, the numbers of Chinese tourists have visibly dropped since Beijing banned overseas group tours on Jan. 27.

Fears were heightened over the weekend after an 80-year-old Chinese tourist died of the virus at a hospital in Paris — the first fatality outside Asia since the start of the outbreak.

The effects, especially on businesses catering to the ever-growing Chinese market, have been immediate. Last week, the Italian government considered allocating assistance to hard-hit tour operators.

“It’s seen as on par with an earthquake, a situation of emergency,” said Mattia Morandi, a spokesman for Italy’s ministry of culture and tourism.

As elsewhere in Europe, Italy’s tourism sector has benefited greatly from China’s economic rise over the past two decades. In 2000, three years before the outbreak of the SARS virus across Asia, Chinese tourists overseas spent $10 billion, according to the United Nations World Tourism Organization. In 2018, that figure was $277 billion.

On Jan. 21, Italy’s minister of culture and tourism, Dario Franceschini, and his Chinese counterpart, Luo Shugang, inaugurated a yearlong multifaceted program aimed at boosting cultural exchanges and tourism between the two countries.

They discussed an “intense” calendar of initiatives involving the performing arts, movie productions and numerous exhibitions, including a show of ancient Roman sculptures at the National Museum of China in Beijing and one of terra-cotta warriors at the Reggia di Caserta.

Direct flights between Italy and China had been expected to triple over the year, rising to 108 per week from 56.

But only 10 days after the ministers met, Italy suspended flights to and from China, as the coronavirus outbreak spread around the world and the death toll continued to rise in China.

As more nations have restricted travel to and from China, effectively quarantining the world’s most populous nation, the ever-present large groups of Chinese tourists, arms often laden with brand-name shopping bags, have disappeared from the European landscape.

With the outbreak showing few signs of abating, tourism-dependent businesses across Europe are bracing for empty hotel rooms and stores in the coming high season.

In some places, the spread of coronavirus has also had a chilling effect on tourists from other nations.

“People don’t want to be on trains or planes or go to conferences,” said Alberto Corti, who is responsible for the tourism sector for Confcommercio, a leading business association in Italy. He described it as a “psychosis effect.”

Last week, the world’s biggest mobile communications trade fair, scheduled to start in Barcelona, Spain, on Feb. 24, was canceled as participants withdrew over fears linked to the virus.

The Spanish authorities and the organizers of the fair, Mobile World Congress, had insisted that Barcelona was fully prepared to avoid the spread of coronavirus. But the list of cancellations had grown longer every day, and included Amazon, Intel and Facebook.

It was the most important business event so far to be canceled outside Asia since the start of the outbreak.

According to Ada Colau, the mayor of Barcelona, the conference had been expected to bring the city more than 100,000 visitors and revenues of 500 million euros, about $540 million. It had also been expected to create 14,000 temporary jobs and allow hotels to reach full occupancy during the low season.

Overall, despite the explosive growth in the number of Chinese tourists in Europe, they still represent a relatively small share of visitors, outnumbered by other Europeans or Americans.

In the most popular destinations, like Paris, already overwhelmed with tourists, the overall economic impact has been limited so far, officials said. The Louvre Museum, which Chinese were second only to Americans in visiting last year, has not suffered a decrease in visitors since the start of the outbreak, said a spokeswoman, Sophie Grange.

The Chinese account for 3 percent of visitors to Paris — about 800,000 visitors a year, compared with 2.4 million from the United States, according to the city’s Convention and Visitors Bureau.

China represents “a small fraction of our tourism economy,” said Corinne Menegaux, the bureau’s director. “If it were the United States, it would be something else.”

Still, Ms. Menegaux said that because Chinese tourists often traveled in groups and tended to use specific hotels and stores, some businesses have been disproportionately affected. Sales at some duty-free stores and other businesses, where Chinese account for 80 percent of the clientele, have plummeted, she said.

At Galeries Lafayette — where many salespeople are Chinese and even the French greet all Asian customers with a “ni hao” — foot traffic has slowed considerably because of the outbreak, salespeople said.

The company has aggressively courted Chinese tourists to Paris and also opened stores in China. Margaux Berthier, a spokeswoman for Galeries Lafayette, declined to comment on the outbreak’s impact on its business.

“Unfortunately, there are no tourists to take their place,” said Patrick Jacquier, president in the Dijon region for UHIM, the main trade group for hotels and restaurants.

In Britain, visitors from China spend an average of 16 nights per stay, more than double the overall average of a week, according the national tourism agency, Visit Britain.

In Germany, where the Chinese account for about 3 percent of visitors, favorite destinations like Munich and Heidelberg have reported cancellations of tour groups and drops in tourist numbers.

In Füssen, near the fairy tale castle of Neuschwanstein, Chinese bookings at the euro Park Hotel International have been canceled through the first half of April.

To ensure that other guests feel comfortable, the hotel has taken extra measures, including misting the rooms with disinfectant even before the regular cleaning staff make their rounds and individually treating every room key after each use, said the hotel’s director, Fabien Geyer. Containers of hand disinfectant are also available to guests for free.

In Austria, the Chinese love the salt-mining town of Hallstatt, a UNESCO World Heritage site, so much that they built a copy at home in Guangdong Province.

“Chinese tourists are very valuable to us. They spend money when shopping and tend to spend the night in higher-end hotels,” said Gregor Gritzky, head of the regional tourism bureau that covers Hallstatt.

While the region attracts European skiers in winter, Mr. Gritzky said he was worried about the warmer months that usually drew the Chinese.

“We are hoping for signs that this won’t last too long,” he said of the outbreak.

Reporting was contributed by Aurelien Breeden and Constant Méheut in Paris; Marc Santora and Ceylan Yeginsu in London; Melissa Eddy in Berlin; Raphael Minder in Madrid; and Elisabetta Povoledo in Rome.