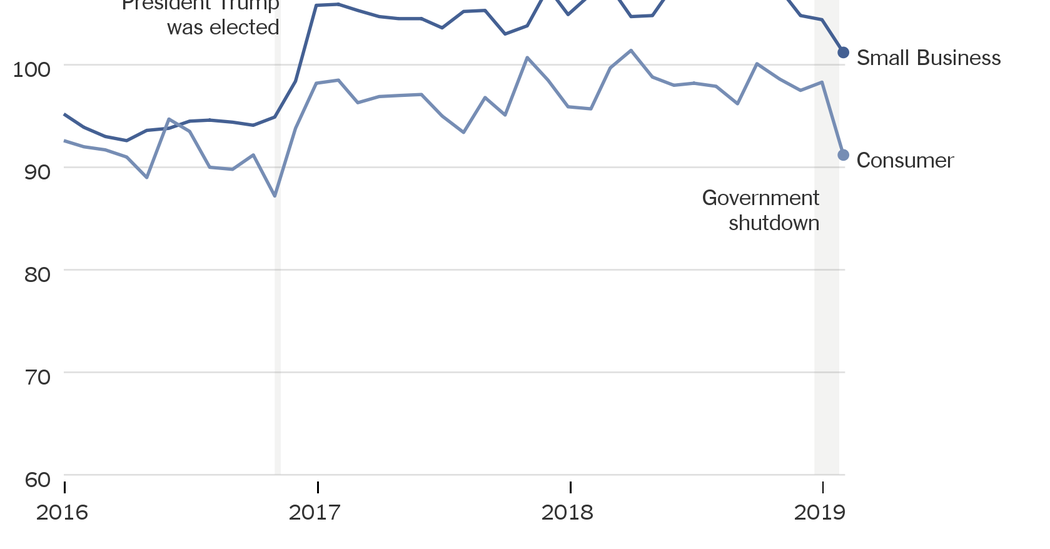 The government shutdown and the late 2018 stock market tumult eroded confidence in the economy among business owners and consumers alike last month.

Now that the stock market has rallied and the government has reopened, will optimism about the economy rebound, or is the recent slide an indication of a more lasting shift?

In January, both the National Federation of Independent Business’s optimism index for small businesses and the University of Michigan’s consumer sentiment index fell to their lowest levels since at least November 2016. And the Conference Board’s index of consumer confidence posted its steepest decline over the past few months since 2011.

Those three indexes had jumped in the months after Donald J. Trump was elected president on optimism that his pro-business agenda of reduced taxes and regulation would ignite economic growth. The indexes peaked last year as the stock market marched to record highs, and despite the recent pullback, they remain at historically elevated levels.

Businesses, policymakers and investors often use sentiment surveys to evaluate the direction of the economy. If confidence is high, the thinking goes, business owners and consumers are more likely to open their wallets to make purchases, hire employees and expand their operations. If those same groups are worried about the future, they are more likely to curtail their spending.

But upward swings in sentiment do not necessarily translate into increased spending and economic growth. The economy, for instance, remained sluggish for more than a year after consumer and business confidence jumped in the months after the 2016 election.

Such indexes are also sensitive to short-term moves in the stock market and political developments that have little effect on spending.

Indications that sentiment is set to rebound are beginning to appear. Economic confidence recovered in a poll conducted in early February for The New York Times by the online research firm SurveyMonkey.

The University of Michigan releases a preliminary version of its survey roughly halfway through each month and then its final report at the end. Last month, the final figure, although the lowest since October 2016, showed a slight uptick from the preliminary version, which was released during the shutdown. Also, the survey’s personal financial expectations index, considered a better indicator of household spending than the overall index, held up during the period.

The university will release its preliminary consumer sentiment index for February on Friday.

The report on small-business sentiment also offered reasons to think the slide in confidence may be temporary. Within the index, expectations among business owners about their sales and the overall economy had the biggest declines. But those segments typically have been the most sensitive to gyrations in the stock markets.

Meanwhile, expectations for business spending, which had slid sharply since August, stopped declining.