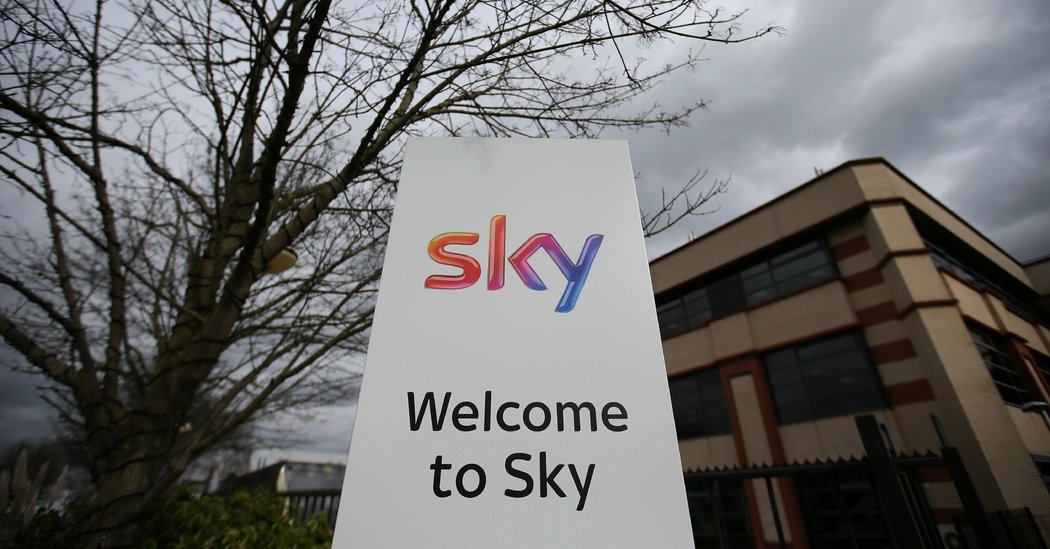 LONDON — Comcast’s bid to acquire the bulk of 21st Century Fox’s entertainment assets appears to be over. Instead, the cable giant will focus on fighting Fox for control of Sky, one of Europe’s most prized media companies.

The Philadelphia-based Comcast increased its offer for Sky on Wednesday, valuing the satellite broadcaster at $34 billion, or 26 billion pounds. That topped a bid from 21st Century Fox, Rupert Murdoch’s media empire, that came earlier in the day. Fox’s offer valued Sky at about $32.5 billion. Sky’s independent board had already recommended Comcast’s new terms.

But Sky is just one element in a larger, complex corporate showdown. The latest move escalates a war between rival media companies being waged across two continents and involving two different transactions exceeding $100 billion in value in total.

Both the Walt Disney Company and Comcast have bid to buy most of Fox’s entertainment assets, including Sky and another growing international business, Star India, which would help increase their global reach. Now, Comcast is unlikely to continue pursuing Fox and will instead concentrate its efforts on acquiring Sky, the people familiar with the process said.

Disney has agreed to pay $71.3 billion for most of Fox, a deal that Fox has accepted and federal regulators have approved. Buying full control of Sky, which Disney’s chief executive, Robert A. Iger, has called “a real crown jewel,” is critical to that effort. Comcast is equally motivated to capture control of Sky, which has more than 23 million customers across five European countries.

The cable company’s previous offer for Sky was about $30 billion and had already received approval from the British government. Fox is likely to receive approval for its bid as soon as Thursday, but would still need to increase it to acquire Sky.

Fox has endured a stringent 18-month review of its pursuit of the broadcaster by the British government, which has worried about the potential of Mr. Murdoch acquiring an outsize role in the country’s news industry.

The bidding war for Sky comes amid a complex set of requirements under British takeover rules. Disney’s increased bid for Fox also raised the value of the 39 percent of Sky that Fox owns, putting those shares out of sync with the remaining 61 percent. Fox’s original bid for Sky valued it at 23 billion pounds.

Britain’s Takeover Panel, the government agency reviewing Sky’s deal, said it had not yet determined if the requirement, known as the “chain principle,” would apply in this case. Normally, the agency mandates a higher price for the full company when one portion of shares are bought through another company. That possibility could tamp down interest in higher bids for Fox, because an increase in Fox’s value could set off rules that would require the buyer to also offer more for the rest of Sky.

The panel also has the authority to institute an auction process at any point to determine the best price for Sky.

Both Disney and Comcast consider Sky, which Mr. Murdoch founded three decades ago, to be among Fox’s most desirable assets because its international presence would bolster either company’s global reach. And Sky’s ownership of sports broadcasting rights, notably those for the English Premier League, is especially attractive.

Sky has the ability to create content and distribute it through satellite and online video services, a model that American media and telecommunications companies hope to to copy. This would help either Disney or Comcast compete against the streaming services of technology giants like Netflix and Amazon that have upended the media landscape.

Keeping up with Silicon Valley’s video ambitions has been a priority for traditional media companies, which have largely decided to compete by opening their wallets to make acquisitions.

Comcast said in a statement that it “has long admired Sky and believes it is an outstanding company and a great fit.”

Earlier in the day, Fox said in its statement, “This transformative transaction will position Sky so that it can continue to compete within an environment that now includes some of the largest companies in the world, but none of whom have demonstrated the same local depth of investment and commitment to the U.K. and to Europe.”

Mr. Murdoch has long believed in the value of Sky. He tried to acquire total control of the broadcaster in 2010, but was forced to withdraw amid public fury over a phone-hacking scandal involving his British tabloids.

He mounted his latest push in 2016. The effort has been weighed down by British regulators’ concerns that the Murdoch family already exerts too much control over the country’s media. Gaining full control of Sky, including its 24-hour news operation, could go too far, government officials have said.

Mr. Murdoch has moved to address those questions with Disney’s help. Fox has proposed selling Sky News to Disney to protect its editorial independence. Britain’s new culture secretary, Jeremy Wright, is expected to announce a final decision on that plan this week. His predecessor, Matthew Hancock, was widely expected to approve that solution.

Comcast said it expected to close the Sky acquisition by October.