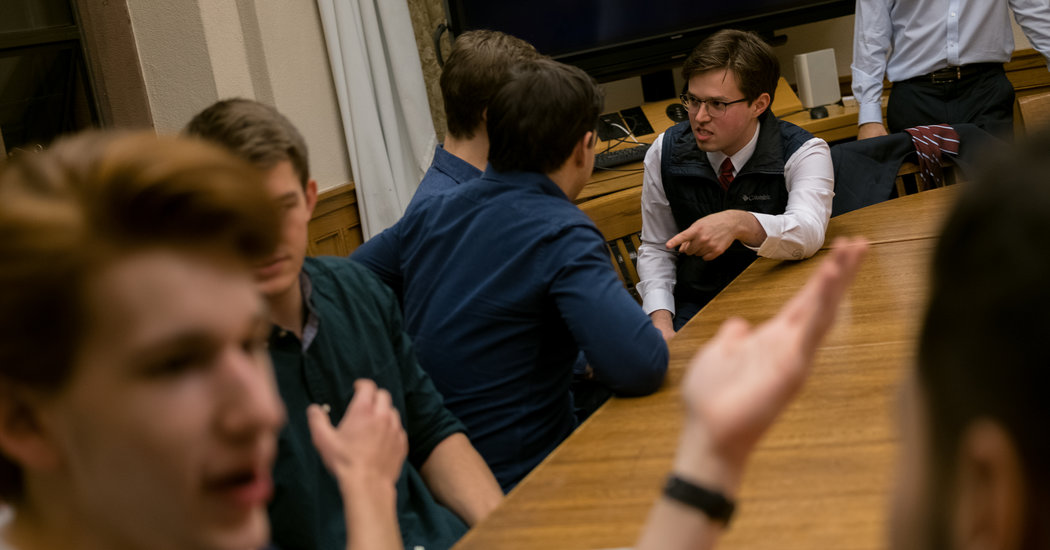 As the Republican Party struggles to find its footing with the next generation of voters, several conservative college groups have banded together to champion something anathema to the party: a carbon tax.

The group is led by the Yale College Republicans, the main campus student organization for young Republicans at Yale, and includes other prominent Republican groups at 22 other schools around the country including Clemson University in South Carolina, North Carolina State University and Texas Christian University in Fort Worth, Texas. Under the name Students for Carbon Dividends, the coalition is backing an idea first broached by Republican heavyweights including former Secretary of State James A. Baker III and former Secretary of State George P. Shultz: Tax the carbon pollution produced by burning fossil fuels and then return the money to consumers as a dividend in the form of monthly cash payments to individuals, both adults and children alike.

Late last month, several of the campus Republican leaders involved in the climate change coalition visited Washington to volunteer at the Conservative Political Action Conference, the annual gathering of conservative activists and politicians.

Republican strategists said the budding movement reflected an important shift on social and environmental issues that could divide the party along generational lines. Political polls suggest that millennials are dissatisfied with what they see as politics as usual from both parties. But Republicans said they worried their ranks would bear the brunt of the shift as young people moved away from party orthodoxy on issues like guns, gay marriage and climate change.

“It’s a problem right now, but it’s going to be a catastrophic problem in five years or 10 years,” Mr. Heye said.

The leaders of nearly two dozen Republican student groups involved in the coalition said they and their peers accepted the scientific consensus that humans have played a significant role in warming the planet. Many said they were tired of hearing Republican leaders deny climate change and did not want their party branded as anti-science.

“As a party, we’re losing voters rapidly because of this issue,” said Kiera O’Brien, president of Harvard University’s Republican club, which is a member of the carbon-tax coalition. “I’m increasingly frustrated by the fact that the science is disputed when there’s clearly evidence of climate change. We need to have a solution for our party, but we also need a solution that’s an alternative between doing nothing or ceding everything to the government.”

By embracing what they call a conservative approach, the students said they hoped to help move the Republican Party on the issue.

Under the plan the students are proposing, an initial tax of $40 per ton of carbon would be levied at the point where fossil fuels enter the economy, for instance a mine or port. The tax would increase over time. That money would then be returned to taxpayers in a per-person monthly payment, with half-payments going to children under the age of 18 and a limit of two children per family. The Climate Leadership Council created by Mr. Baker and Mr. Shultz estimates a dividend would amount to about $2,000 a year for a family of four.

As part of the deal, there would also be limitations on regulatory actions like the Clean Power Plan, which former President Barack Obama imposed to reduce carbon emissions from coal-fired power plants. Members of the coalition said they considered a promise to scale back future regulation key to encouraging Republican support.

Alexander Posner, 22, a Yale University senior who founded the group, said he has been interested in climate change and energy for years. When he read about the climate council Mr. Baker and Mr. Shultz began last year, he signed up for an internship. Soon after, he started contacting his peers at Republican clubs across the country to sound them out on creating a coalition of their own.

“We’ve had a lot of conversations, and literally not once has the validity of climate science come up,” Mr. Posner said. “I think students really want to have a solutions-based discussion.”

The coalition of 23 Republican student groups, five college Democratic clubs and three university environmental clubs comes at a unique moment of youth political activism. Students nationwide are mobilizing for gun control, inspired by the survivors of the school shooting in Parkland, Fla., and Mr. Posner said that, despite the profound differences in the two movements, young Republicans working on issues like climate change were watching the gun protests with interest.

“I think the common theme here is if representatives are not responding to the desires of their constituents, in particular young people,” he said, “then young people are going to step forward. This coalition on the climate front is sort of a reflecting of the inaction of adults.”

“Young voters don’t necessarily have strong views on what should be done about climate change, but doing nothing is not a path that most young people, including Republicans, tend to support,” said Kristen Soltis Anderson, the Republican strategist who conducted the survey.

Harrison Preddy, 22, a senior majoring in political science at North Carolina State University, said he was skeptical when he first saw Mr. Posner’s email asking him to embrace a carbon tax and dividend. But when the two spoke on the phone, Mr. Preddy said, “it started to speak to what I had been feeling we were missing for so long.”

Raised on a tobacco farm about 45 minutes outside of Raleigh, N.C. — Mr. Preddy jokes that his family couldn’t afford pesticides, so they were organic farmers before it was cool — he said accepting the science of climate change was not a leap for him because his family had long been attuned to shifting weather patterns. But, he said, he rejected the solutions put forward by Democrats, including regulations like the Clean Power Plan, because he believes they ignored economic hardships posed on communities that depend on fossil fuel production.

“I’m a strong believer that we need to take action, but at the same time I understood the plights of coal miners, the plight of economic restructuring. It’s a heart-string issue for me,” Mr. Preddy said.

Ms. O’Brien said growing up the daughter of a biology teacher near the Tongass National Forest in Alaska taught her a respect for both science and the environment. Ms. O’Brien said she has found the lack of a coherent Republican Party position on climate change her single biggest challenge in recruiting students to the conservative movement.

“The question I will frequently get is, ‘Why do you hate the planet? Why do you not like science?’” she said. “We can’t be a party that’s entrenching itself in a dying planet.”

Dylan Jones, chairman of the Republican club at the University of Kansas, called addressing climate change a pro-life issue. Mr. Jones, a strong supporter of President Trump, said he questions a good deal of what is said about climate change. But, he said, he believes lawmakers should find a way to protect the planet.

“If the Republican Party is really the party of life, then we fight for life under every circumstance,” he said. “Now it’s time for young people like myself to come up with ideas and solutions so we can be part of the discussion and debate instead of sitting on the wayside and denouncing science.”

The Republican National Committee did not return a call to discuss the group’s proposal or its strategy toward younger conservatives. The party platform established ahead of the 2016 presidential election takes no position on the science of climate change other than to say the United Nation’s scientific body, the Intergovernmental Panel on Climate Change is “a political mechanism, not an unbiased scientific institution,” and that its conclusions should be assessed in that context. The I.P.C.C. is the principal international scientific body charged with reviewing climate science and issuing reports about the risks to the world’s government.

Mr. Baker said in an interview he believes the idea of a carbon tax and dividend can appeal to those who question climate change science. “I’m sort of a climate change skeptic,” he said. “I do think the climate is changing but I don’t know why, and I sure don’t understand the extent to which man may be responsible for it.”

But, Mr. Baker added, uncertainty about the magnitude of the threat shouldn’t be an excuse not to act. “This is a free-market based solution,” he said.

An earlier version of this article misspelled the surname of a former secretary of state in several instances. He is George P. Shultz, not Schultz.

Lisa Friedman reports on climate and environmental policy in Washington. A former editor at Climatewire, she has covered eight international climate talks. @LFFriedman

A version of this article appears in print on , on Page A13 of the New York edition with the headline: Unusual Plan From Young Conservatives: Carbon Tax. Order Reprints | Today’s Paper | Subscribe