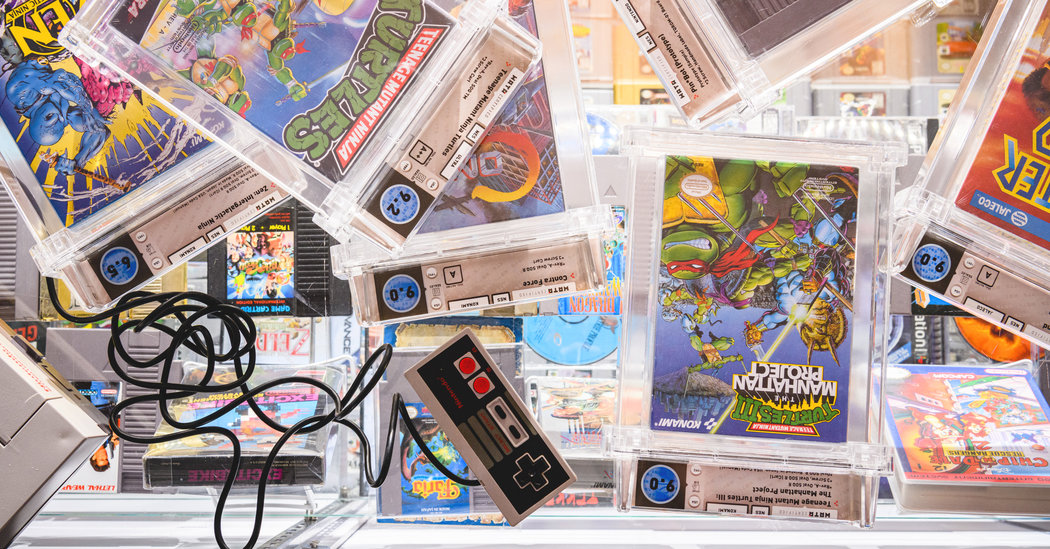 Interest in factory-sealed video games has soared in the past year, with some companies aggressively targeting collectors from more established markets. The hottest investments are games for the Nintendo Entertainment System, which popularized characters like Link, Mega Man and Mario in the 1980s.

Collectors have been able to quickly flip the most coveted titles, making thousands of dollars in profit and fueling concerns of unsustainable hype.

One collector, Donald Brock Jr., who runs the website Columbia Comics, said he had spent about $50,000 buying vintage video games since his first purchase in March. One sealed N.E.S. game cost nearly $1,500. He had its condition graded, and then sold it for more than $12,000.

The top end of the market has also been invigorated. In September, Eric Naierman, a dentist who had primarily collected sports cards, spearheaded a $1 million purchase of dozens of games, months after video game collectors jointly bought a rare Super Mario Bros. game for more than $100,000. A copy of the original Mega Man recently sold at auction for $75,000.

Collectors say that multiple gold copies of Nintendo World Championships — only 26 were distributed, making it one of the rarest N.E.S. games — have reached the six-figure threshold in private sales.

“You almost can’t pay too much because stuff is going up so fast,” said Josh Hamblin, the owner of SideQuest Games in Portland, Ore., who advises comic book collectors seeking to diversify.

Some longtime collectors are pleased, saying video games are an art form that deserves to be recognized. However, other members of this tight-knit community say the higher prices are exaggerated, even if their own collections are now worth far more, and some have raised ethical concerns.

“Market distortion, both legal and illegal, ethical and unethical, is rampant in the art world,” said Richard Lehun, a founding member of Stropheus, a New York firm that provides legal services for the arts community. “Everyone is essentially trying to game the system.”

In collectibles markets, prices are highest when significance and scarcity overlap. A prime example is Action Comics No. 1, the 1938 issue whose cover features Superman’s debut. There are thought to be about 100 surviving copies, and a well-preserved version has fetched $3.2 million at auction. A copy once owned by the actor Nicolas Cage sold for $82,500 in 1992, $150,000 in 1997 and $2.2 million in 2011.

Intoxicated by the ascent in value of rare collectibles, speculators are eager to find the equivalent in video games while prices are still relatively low.

“It’s something they can break into at this point,” said Valarie McLeckie, who oversees video game sales at Heritage Auctions, a category that Sotheby’s and Christie’s have not entered. “They want to get in on the ground floor of this new collectible.”

The surging values have surprised even longtime collectors, who for years were primarily interested in completing their collections that included arcane titles such as Color a Dinosaur, a game for preschoolers.

Mr. Hamblin said he was ecstatic to spend only $1,000 on a sealed copy of Teenage Mutant Ninja Turtles, even though it would have cost just a few hundred dollars two years ago. Some speculators visit his store, he said, without properly understanding the industry.

“They are just coming in and buying anything that is sealed,” he said. “To the point where I am saying, ‘Don’t buy this, it is not rare at all.’”

A game like Super Mario Bros., which was released 35 years ago, can seem like an odd choice for a collectible. More than 40 million copies were sold, according to Nintendo, and Mario had made his barrel-jumping debut years earlier in Donkey Kong.

But collectors have been charmed by a guide to Nintendo’s “black box” series that details 11 variations of the uniform black packaging for Super Mario Bros., including early copies released in New York and Los Angeles that were sealed only with a round, black sticker.

That guide, published last year by Wata Games, which began grading the condition of game boxes, cartridges and manuals in April 2018, sent people scurrying for a variant that previously drew scant interest. Dr. Naierman, the collector who was part of a $1 million game purchase, said he had obtained 20 sticker-sealed games since March.

“It’s creating chaos in the market,” said Shawn Surmick, who writes a column for Antiques & Auction News. He added, “A lot of these starry-eyed speculators just see dollar signs.”

When Heritage brokered a $100,150 private sale of a Super Mario Bros. game last February, it called it the only known copy with a sticker seal still intact. Heritage also said Wata had given the game a grade of 9.4 out of 10, or near mint condition.

But the sale raised ethical questions among some collectors, who flocked to online forums with complaints of inflated prices. At least two of the five buyers are personally invested in Wata, and the game’s previous owner and a buyer are on Wata’s advisory board. That buyer, Jim Halperin, is also a co-chairman and co-founder of Heritage.

Deniz Kahn, the president of Wata, said that transparency was paramount and Wata employees were not allowed to have games graded by the company or sell those that were.

Several industry observers and parties involved in the Super Mario Bros. sale said it was legitimate, emphasizing a competing six-figure offer for the game and rebutting claims of a cabal artificially driving up the price.

“We certainly thought the publicity was a nice add-on benefit,” Mr. Halperin said. “But I don’t think we would have bought it if we didn’t think it was a good deal.”

If retro video games are successfully portrayed as valuable assets, Heritage and Wata both stand to profit as middlemen in the transactions. The companies’ partnership has helped Wata rapidly compete with Video Game Authority, which has graded games for about 15 years.

The auction house, which charges a 20 percent commission on video game sales, was projected to generate $500 million in revenue last year, according to the market research firm IBISWorld.

Wata has been overwhelmed with demand since the groundbreaking Super Mario Bros. sale as collectors race to determine the value of their games. The company has successfully targeted comic collectors in particular by using a parallel 10-point grading scale, parading top-tier games at comic conventions and highlighting the first appearance of video game characters.

Mr. Surmick said that Wata brought trust and liquidity into the market but that paying current prices for graded games was risky because it takes years for a market to stabilize.

And surging markets can falter, from tulip mania in the 1630s to the dot-com crash in the 2000s. Those who doubt that video games will retain their newfound value say it is driven by nostalgia that will wane in an era of digital distribution.

When games are graded, they are authenticated and then encased in hard plastic shells to ward off deterioration. A similar process helped accelerate the growth of the comic and coin industries, said Richard Lecce, who buys and sells rare coins and has one of the world’s largest video game collections.

Mr. Lecce, who organized the group of Super Mario Bros. buyers that includes Mr. Halperin, is confident in the investment, trusting that future collectors will care about Mario because the character is embedded in pop culture.

“To me, Super Mario Bros. or The Legend of Zelda are artworks that are far more important than, say, the Mona Lisa,” said Mr. Lecce, who tried unsuccessfully to sell the Super Mario Bros. copy for $1,000,000 in a recent episode of “Pawn Stars.”

But Mr. Brock, the comics collector, urged caution, saying that people entering the video game market need to do their homework because companies like Heritage and Wata have incentives to drive excitement.