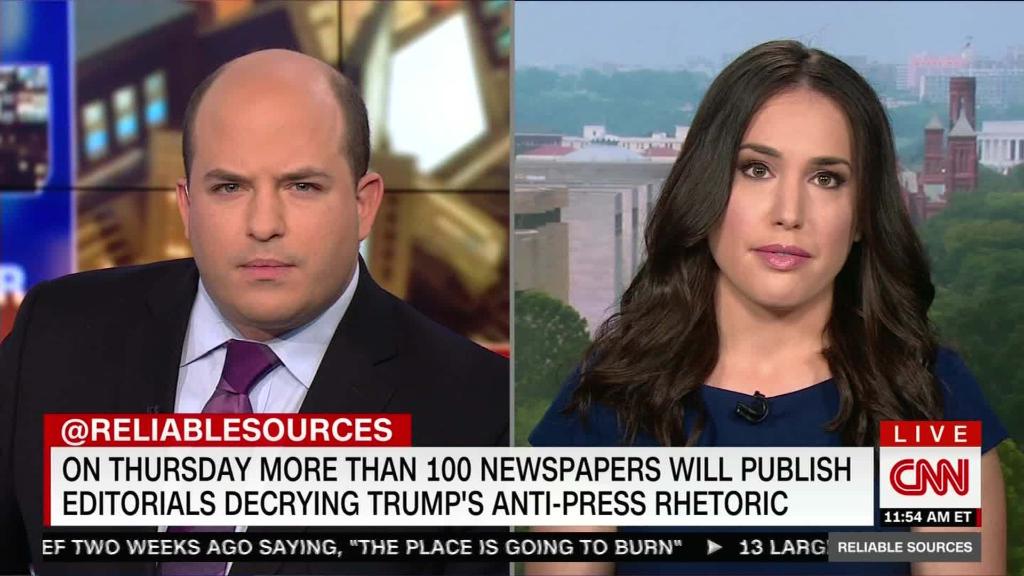 About 350 newspapers will all have one thing in common on Thursday: A statement supporting the free press and decrying President Trump’s attacks against the media.

From The Martha’s Vineyard Times to the Dallas Morning News… from the Yankton County Observer in South Dakota to the Bangor Daily News in Maine… the papers will all run editorials as part of an effort first proposed by the Boston Globe earlier this month.

Marjorie Pritchard, the Globe’s deputy editorial page editor, told CNN that more papers were still “signing on” for the effort as of Wednesday afternoon.

Each paper is writing its own editorial. “This whole project is not anti-Trump. It’s really pro-press,” The Globe’s version says.

Related: Kansas newspaper goes from endorsing Trump to denouncing his attacks on the press

The campaign is significant because it moves the conversation about Trump’s attacks out of Washington and New York and into communities across the country.

Some of the participants emphasized the local nature of most news coverage, and said Trump’s extreme rhetoric — labeling journalists “enemies of the people,” for instance — hurts everyone, not just the political reporters that typically enrage him.

The editorial in Benson, Minnesota’s Swift County Monitor News was titled “Attacks On Journalists Will Lead To Violence.”

In Athens, Ohio, the Athens News pointed out that local officials inspired by Trump are increasingly going “on the attack.”

In Belen, New Mexico, the Valencia County News-Bulletin wrote that “We are not the enemy; We are the people.”

A handful of radio and TV stations have also decided to air editorials. But the effort mostly involves newspapers with editorial pages.

At most papers, especially big dailies, the editorial page is a separate enterprise from the newsroom. Editorials typically reflect the opinion of the publisher, not necessarily the newsroom.

But the campaign has garnered criticism from many Trump supporters, and from some media critics, because of the appearance of a coordinated attack.

“It plays into Trump’s narrative that the media are aligned against him,” San Francisco Chronicle editorial page editor John Diaz wrote Wednesday.

Diaz predicted that Trump will call it “collusion” and “will attempt to cite this day of editorials to discredit critical and factual news stories in the future, even though no one involved in those pieces had anything to do with this campaign.”

On Fox News, some of Trump’s boosters have already tried to do this.

“We’re just defending the First Amendment and that shouldn’t be a controversial proposition,”Pritchard said in response to the criticism about the campaign. “This is about the media’s role as a watchdog.”

Some of the local editorials tried to differentiate between opinion hosts on TV and just-the-facts reporters in the field.

The Duluth News Tribune in Duluth, Minnesota said its editorial doubled as a “call to stop lumping together as ‘the media’ both legitimate news-gatherers and those whose practice of propaganda is meant to mislead and misinform for self-serving purposes.”

As a practical matter, Thursday’s editorials may be mostly preaching to the choir, reinforcing the positive feelings of already-loyal readers.

New polling by Quinnipiac shows that most Americans, 65%, regard the news media as an important part of democracy, not an “enemy.” But 26% of respondents, including 51% of Republicans, sided with Trump’s “enemy” rhetoric.

Press freedom groups have been sounding alarms about the threats posed by this dehumanizing language.

But some of Trump’s supporters have cheered him on, arguing that the press is abusively biased against his presidency.

On Wednesday afternoon The New York Times published a list of the participating papers and excerpts from some of the editorials.

Criticizing the news media “is entirely right,” The Times said in its own editorial. But “insisting that truths you don’t like are ‘fake news’ is dangerous to the lifeblood of democracy. And calling journalists the ‘enemy of the people’ is dangerous, period.”

In the days leading up to Thursday’s coordinated effort, Pritchard said it was key that each paper wrote its own message.

“The impact of Trump’s assault on journalism looks different in Boise than it does in Boston,” she wrote in the pitch to other papers. “Our words will differ. But at least we can agree that such attacks are alarming.”