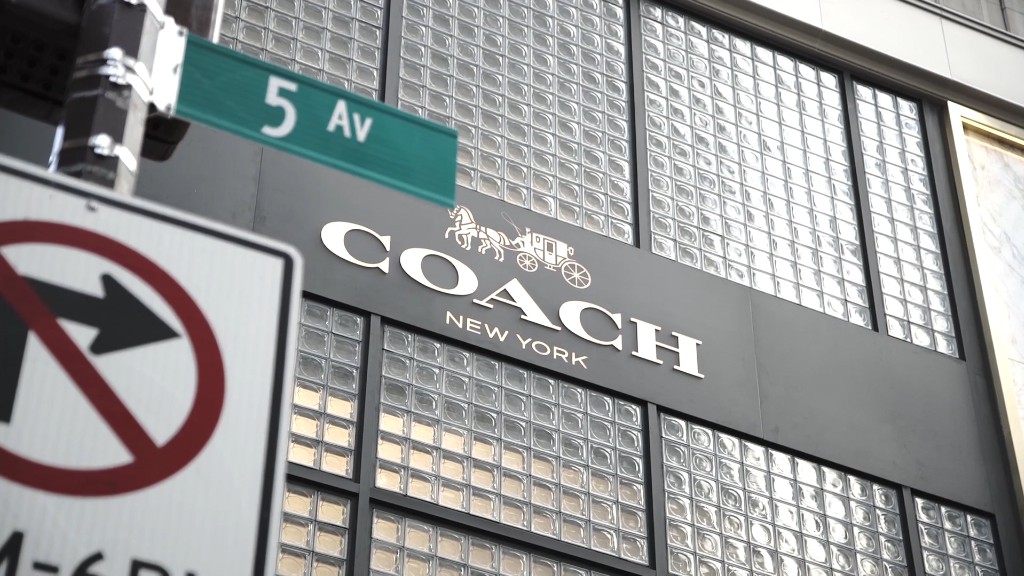 Coach, the brand famous for its handbags, is about to change its corporate name. It’ll soon be called Tapestry.

The company announced Wednesday that it was planning to rename itself as Tapestry, effective on Halloween. The company’s ticker symbol will change from COH to TPR as well. Shares of Coach (COH) fell more than 2% after the announcement.

But fear not, fans of Coach wallets and clutches. The store name and all the accessories it produces will remain Coach.

Andrea Shaw Resnick, a spokeswoman for the company soon to be known as Tapestry, told CNNMoney that nothing will change for consumers.

Those brands will keep their names as well.

And the new Tapestry name potentially makes it easier for the company to purchase even more fashion lines and put them under the Tapestry umbrella. (Speaking of which, you can buy actual umbrellas from Coach and Kate Spade.)

So you can think of the Coach name change similarly to Alphabet (GOOGL, Tech30), the parent company of Google and YouTube. Alphabet is just a corporate moniker, but there isn’t actually an Alphabet consumer brand. And most people still refer to Alphabet as Google.

Resnick said that the Tapestry name was chosen partly because it’s a reflection of the history and heritage of the Coach, Kate Spade and Stuart Weitzman brands. It’s also a play on fashion, “weaving the brands together to make something beautiful.”

To that end, the new Tapestry website that went live Wednesday features the tag line of “Individual Expression. Collective Beauty.”

Coach joins a growing list of corporations who have changed their names over the past few years. Many of the name changes are a bit puzzling.

Verizon (VZ, Tech30), which itself is a made up name formed after telecoms Bell Atlantic and GTE merged, created the Oath subsidiary in 2017 to house the content operations it acquired through purchases of AOL and parts of Yahoo.

What’s left of Yahoo then did a name change of its own — to Altaba (AABA). That name plays off the fact that the Yahoo assets Verizon didn’t buy are mainly an investment in Chinese e-commerce firm Alibaba (BABA, Tech30).

Then there’s the routinely maligned Tronc (TRNC), the new name for the newspaper publisher that used to be called Tribune. Cigarette company Philip Morris famously rebranded itself as Altria (MO). Retail giant Target (TGT)used to be known as Dayton Hudson.

And the now defunct Woolworth chain of five and dime stores curiously changed its name to Venator in the late 1990s … before changing it once more to Foot Locker, a reflection of the fact that the company owns Foot Locker.

Sometimes, you can just let a company’s name speak for itself.