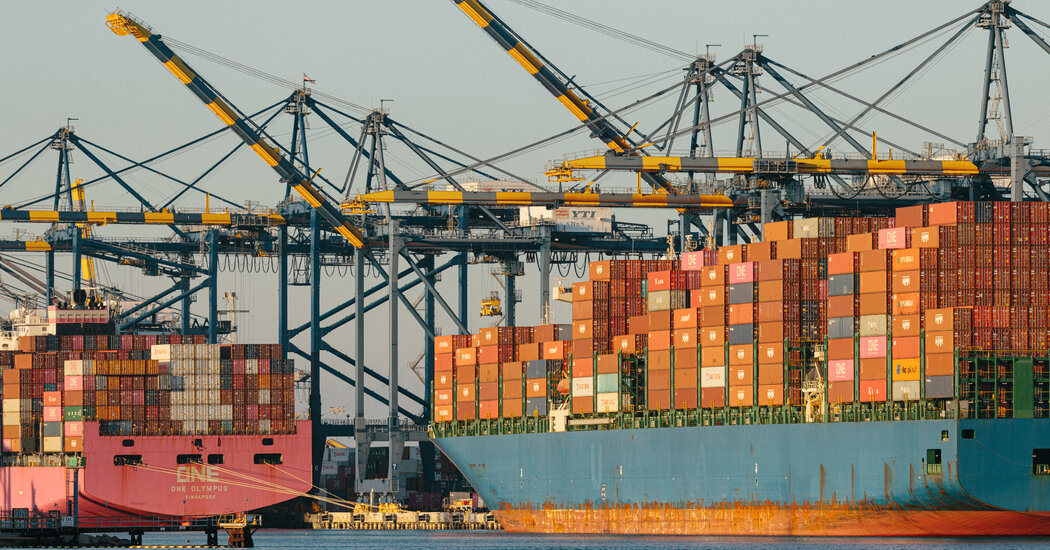 WASHINGTON — Efforts to mitigate climate change are prompting countries across the world to embrace dramatically different policies toward industry and trade, bringing governments into conflict.

These new clashes over climate policy are straining international alliances and the global trading system, hinting at a future in which policies aimed at staving off environmental catastrophe could also result in more frequent cross-border trade wars.

In recent months, the United States and Europe have proposed or introduced subsidies, tariffs and other policies aimed at speeding the green energy transition. Proponents of the measures say governments must move aggressively to expand sources of cleaner energy and penalize the biggest emitters of planet-warming gases if they hope to avert a global climate disaster.

But critics say these policies often put foreign countries and companies at a disadvantage, as governments subsidize their own industries or charge new tariffs on foreign products. The policies depart from a decades-long status quo in trade, in which the United States and Europe often joined forces through the World Trade Organization to try to knock down trade barriers and encourage countries to treat one another’s products more equally to boost global commerce.

Now, new policies are pitting close allies against one another and widening fractures in an already fragile system of global trade governance, as countries try to contend with the existential challenge of climate change.

“The climate crisis requires economic transformation at a scale and speed humanity has never attempted in our 5,000 years of written history,” said Todd N. Tucker, the director of industrial policy and trade at the Roosevelt Institute, who is an advocate for some of the measures. “Unsurprisingly, a task of this magnitude will require a new policy tool kit.”

The current system of global trade funnels tens of millions of shipping containers stuffed with couches, clothing and car parts from foreign factories to the United States each year, often at astonishingly low prices. But the prices that consumers pay for these goods do not take into account the environmental harm generated by the far-off factories that make them, or by the container ships and cargo planes that carry them across the ocean.

American and European officials argue that more needs to be done to discourage trade in products made with more pollution or carbon emissions. And U.S. officials believe they must lessen a dangerous dependence on China in particular for the materials needed to power the green energy transition, like solar panels and electric vehicle batteries.

The Biden administration is putting in place generous subsidies to encourage the production of clean energy technology in the United States, such as tax credits for consumers who buy American-made clean cars and companies building new plants for solar and wind power equipment. Both the United States and Europe are introducing taxes and tariffs aimed at encouraging less environmentally harmful ways of producing goods.

Biden administration officials have expressed hopes that the climate transition could be a new opportunity for cooperation with allies. But so far, their initiatives seem to have mainly stirred controversy when the United States is already under attack for its response to recent trade rulings.

The administration has publicly flouted several decisions of World Trade Organization panels that ruled against the United States in trade disputes involving national security issues. In two separate announcements in December, the Office of the United States Trade Representative said it would not change its policies to abide by W.T.O. decisions.

But the biggest source of contention has been new tax credits for clean energy equipment and vehicles made in North America that were part of a sweeping climate and health policy bill that President Biden signed into law last year. European officials have called the measure a “job killer” and expressed fears they will lose out to the United States on new investments in batteries, green hydrogen, steel and other industries. In response, European Union officials began outlining their own plan this month to subsidize green energy industries — a move that critics fear will plunge the world into a costly and inefficient “subsidy war.”

The United States and European Union have been searching for changes that could be made to mollify both sides before the U.S. tax-credit rules are settled in March. But the Biden administration appears to have only limited ability to change some of the law’s provisions. Members of Congress say they intentionally worded the law to benefit American manufacturing.

European officials have suggested that they could bring a trade case at the World Trade Organization that might be a prelude to imposing tariffs on American products in retaliation.

“We need to follow the same rules of the game,” he said.

Anne Krueger, a former official at the International Monetary Fund and World Bank, said the potential pain of American subsidies on Japan, South Korea and allies in Europe was “enormous.”

“When you discriminate in favor of American companies and against the rest of the world, you’re hurting yourself and hurting others at the same time,” said Ms. Krueger, now a senior fellow at the School of Advanced International Studies at Johns Hopkins University.

But in a letter last week, a collection of prominent labor unions and environmental groups urged Mr. Biden to move forward with the plans without delays, saying outdated trade rules should not be used to undermine support for a new clean energy economy.

“It’s time to end this circular firing squad where countries threaten and, if successful, weaken or repeal one another’s climate measures through trade and investment agreements,” said Melinda St. Louis, the director of the Global Trade Watch for Public Citizen, one of the groups behind the letter.

Other recent climate policies have also spurred controversy. In mid-December, the European Union took a major step toward a new climate-focused trade policy as it reached a preliminary agreement to impose a new carbon tariff on certain imports. The so-called carbon border adjustment mechanism would apply to products from all countries that failed to take strict actions to cut their greenhouse gas emissions.

The move is aimed at ensuring that European companies that must follow strict environmental regulations are not put at a disadvantage to competitors in countries where laxer environmental rules allow companies to produce and sell goods more cheaply. While European officials argue that their policy complies with global trade rules in a way that U.S. clean energy subsidies do not, it has still rankled countries like China and Turkey.

The Biden administration has also been trying to create an international group that would impose tariffs on steel and aluminum from countries with laxer environmental policies. In December, it sent the European Union a brief initial proposal for such a trade arrangement.

The idea still has a long way to go to be realized. But even as it would break new ground in addressing climate change, the approach may also end up aggravating allies like Canada, Mexico, Brazil and South Korea, which together provided more than half of America’s foreign steel last year.

Under the initial proposal, these countries would theoretically have to produce steel as cleanly as the United States and Europe, or face tariffs on their products.

Proponents of new climate-focused trade measures say discriminating against foreign products, and goods made with greater carbon emissions, is exactly what governments need to build up clean energy industries and address climate change.

“You really do need to rethink some of the fundamentals of the system,” said Ilana Solomon, an independent trade consultant who previously worked with the Sierra Club.

Ms. Solomon and others have proposed a “climate peace clause,” under which governments would commit to refrain from using the World Trade Organization and other trade agreements to challenge one another’s climate policies for 10 years.

“The complete legitimacy of the global trading system has never been more in question,” she said.

In the United States, support appears to be growing among both Republicans and Democrats for more nationalist policies that would encourage domestic production and discourage imports of dirtier goods — but that would also most likely violate World Trade Organization rules.

Most Republicans do not support the idea of a national price on carbon. But they have shown more willingness to raise tariffs on foreign products that are made in environmentally damaging ways, which they see as a way to protect American jobs from foreign competition.

Robert E. Lighthizer, a chief trade negotiator for the Trump administration, said there was “great overlap” between Republicans and Democrats on the idea of using trade tools to discourage imports of polluting products from abroad.

“I’m coming at it to get more American employed and with higher wages,” he said. “You shouldn’t be able to get an economic advantage over some guy working in Detroit, trying to support his family, from pollution, by manufacturing overseas.”