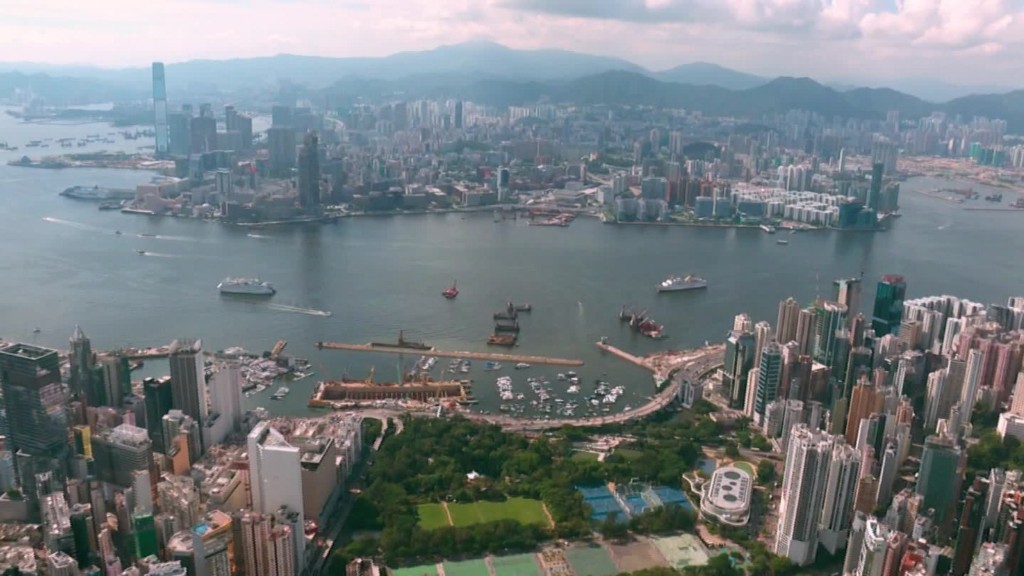 You know your neighborhood is getting pricey when even luxury brands like Gucci move out.

The Italian fashion house is just one of many top Western firms that have found themselves on the wrong end of Hong Kong’s dizzying real estate boom.

The price of commercial property in prime areas of the city has almost doubled since the U.K. handed it back to China two decades ago, becoming the most expensive in the world.

Like many things that have changed in Hong Kong since the historic handover in 1997, China’s rising wealth and power is at the heart of the upheaval.

Chinese companies flush with cash have snapped up trophy office space in central districts, driving up prices. Firms such as Gucci and Burberry (BBRYF) have sought cheaper office locations farther out, brokers and developers say. The two fashion brands declined to comment.

Related: How a ‘barren rock’ became an Asian powerhouse

The influx of firms from the Chinese mainland reflects a broader shift in Hong Kong’s role as a business hub.

“At the time of the handover, Hong Kong was seen as a stepping stone for multinationals looking to tap into the China market,” said Denis Ma, head of research for Hong Kong at property brokerage JLL.

“In a sense that’s still true, but what we’ve seen over the last few years is that [mainland Chinese] firms have begun to take a similar view of Hong Kong as a stepping stone to engage with the wider world.”

Number of Chinese firms has soared

The increasing dominance of China Inc. over Hong Kong is hard to ignore. There are now 1,123 Chinese companies in the territory, almost triple the number 20 years ago, according to real estate services firm CBRE.

Changes within China have driven the trend. Government policies have increasingly opened up Hong Kong to mainland firms; Beijing has encouraged Chinese businesses to expand abroad; and huge sums of money have flooded out of China as its economy slowed in recent years.

The relentless rush of Chinese money has sent the real estate market soaring.

Landlords collect an average of $264 per square foot per year in rent for prime office space in central Hong Kong, far higher than London’s West End ($146) or Midtown Manhattan in New York ($144), according to CBRE.

Becoming a homeowner in Hong Kong has become a lot harder, too, as prices have shot up 89% since 1997, CBRE said. Hong Kong has ranked as the least affordable city for seven years in a row, according to public policy firm Demographia.

Related: Hong Kongers look for an exit 20 years after handover to China

The skyrocketing prices have forced some multinational companies to move to other parts of Hong Kong, but few are quitting the territory altogether. Their numbers have actually more than doubled over the past two decades — from 3,069 to 6,863 — according to CBRE.

Hong Kong’s incoming chief executive, Carrie Lam, raised eyebrows recently when she said that more than 100 U.S. companies’ offices moved out of Hong Kong between 2012 and 2016.

Tara Joseph, president of the American Chamber of Commerce in Hong Kong, dismissed the drop as relatively small. She put it down to the cost of rent as well as a downturn in some industries, particularly retail.