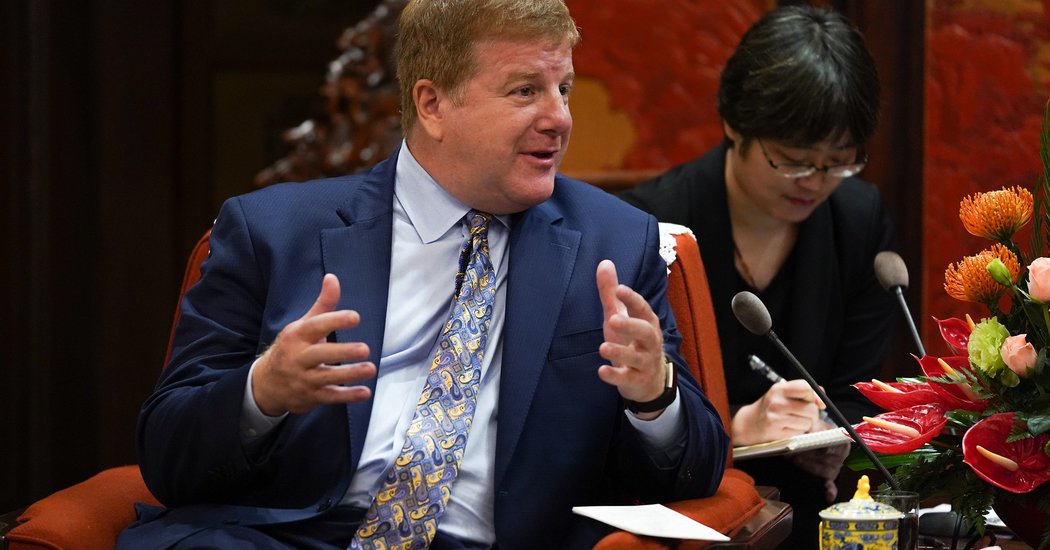 WASHINGTON — The trade deal that President Trump will sign on Wednesday includes commitments by China to curtail practices that American firms complain put them at a disadvantage and force them to hand over valuable intellectual property to Chinese firms, according to several people with knowledge of the deal.

Those concessions, along with China’s agreement to buy $200 billion worth of American goods and to allow greater access to its markets, are expected to be announced at a White House ceremony for the signing of the long-awaited trade deal.

As part of the agreement, China has promised to punish Chinese firms that infringe on or steal corporate trade secrets, satisfying a concern of American businesses. China will also refrain from directing Chinese companies to obtain delicate foreign technologies through acquisitions, including halting purchases by state-owned enterprises that “harm” American interests. American officials say Beijing has used the practice to leap to the forefront of advanced industries, like semiconductors.

Another primary concern of American companies — a requirement that they turn over technology as a condition of doing business in the country — is also addressed in the deal. China has agreed not to force companies to transfer technology, which it has done by requiring joint ventures with Chinese firms and forcing companies to license their intellectual property at low prices.

Trump administration officials say the deal to be signed on Wednesday is only the first step in talks that are expected to help cool tensions between the world’s two largest economies and start to stabilize relations after more than a year of escalating threats from both sides. Mr. Trump has said the second phase of the agreement would be negotiated “at a later date.”

To prevent China from violating the agreement, the administration will continue to have tariffs on $360 billion worth of goods, along with the threat of future tariffs if China reneges on its promises. The deal does not include any agreement for future tariff reductions, according to a spokesman for the Office of the United States Trade Representative.

The success of the deal hinges on whether China will follow through on its commitments on paper — something Trump administration officials and China hawks say it has failed to do in the past. Some critics say China’s promises appear both broad and vague and overlap with other changes it has been pursuing anyway.

Still, the concessions may go at least part of the way toward resolving some of the business community’s concerns about China’s treatment of foreign firms and the kind of unfair trade practices that Mr. Trump said his administration would end.

The agreement was “more positive” than expected, Myron Brilliant, the executive vice president of the U.S. Chamber of Commerce, said at a news conference in Beijing on Monday. He added that striking an agreement had calmed tensions in a long-running trade war.

“We are pleased from what we’ve heard,” Mr. Brilliant said.

Administration officials say the tariff threat gives the deal more teeth than previous pacts with China. But it also raises the possibility that both countries could wind up back in the same type of tit-for-tat trade war that has inflicted economic damage across the globe.

Text of the trade deal has not been made public in either English or Chinese. It appears to include significant concessions, but it remains to be seen how the pact’s legal language will translate into action.

For instance, China has yet to admit that it ever forced foreign companies to transfer technology to Chinese firms, said Derek Scissors, a resident scholar at the American Enterprise Institute. Reading the agreement from the Chinese perspective, he said, they have committed to continue doing the same thing they have always been doing.

“We’ve had the Chinese agree in this public fashion to things we think were important before, and it hasn’t made a difference,” Mr. Scissors said.

Clete Willems, a partner at Akin Gump who helped to advise on trade policy until he left the administration last year, said the deal would fulfill three of the four major conditions laid out in the administration’s initial report that justified tariffs on Chinese goods. That included a requirement that China not direct its companies to acquire sensitive foreign technology.

The one major concern outlined in the administration’s report that was not addressed in the trade deal is cybertheft, Mr. Willems said. China had rebuffed American demands to include promises to refrain from hacking American firms in the text, insisting it was not a trade issue.

“We didn’t fix every single problem with China in this agreement, there is no question about that,” Mr. Willems said. “But what was done is really significant.”

Some analysts have expressed skepticism that a broad threat of tariffs on the overall Chinese economy would really deter Chinese companies bent on gaining a technological edge by stealing trade secrets.

Senator Chuck Schumer, the New York Democrat, sent a letter to Mr. Trump on Tuesday expressing “serious concern” about the potential for entering into a weak trade deal.

“China pledging to make short-term purchases of American goods will not address the fundamental problems that undermine long-term U.S. economic opportunity, prosperity, and security,” he said.

The Trump administration itself has cited China’s failure to live up to its agreements. In March 2018, the Office of the United States Trade Representative detailed a pattern of failed promises by the Chinese government to no longer force foreign companies to transfer technology to Chinese firms. China had failed to live up to that commitment “on at least eight occasions since 2010,” the trade office said.

The deal also includes large purchasing agreements that Mr. Trump has said will raise exports and shrink the American trade deficit with China, but that experts say might be hard to achieve.

Some trade experts have said the agricultural export commitments, which would translate to $16 billion in new shipments a year, would be difficult to meet without rerouting shipments to other countries.

But the targets for manufacturing and services, which includes tourism and education, may be even harder. The number of Chinese students coming to the United States has been trending downward. And exports of manufactured goods, which will include Boeing airplanes, medical devices, automobiles and auto parts and factory equipment, are set far above current levels.

The first-phase agreement does not address some of the administration’s bigger concerns about China’s economic practices, including its use of subsidies and state plans to build domestic industries that flood the global market with low-priced products, often driving American competitors out of business. Critics say the practice has undermined American industries like steel and solar panels, and could prove detrimental to high-tech manufacturers of electric vehicles, computer chips and robots.

The Trump administration, which had hoped to curtail state subsidies as part of a trade deal, tried to head off criticism on Tuesday morning by announcing progress on a multilateral effort to address these practices.

Mr. Lighthizer met with ministers from Japan and the European Union in Washington, and resolved to press for changes at the World Trade Organization that would ban many of the subsidies that China provides to its industries.

He said the three countries would work together to restrict a variety of unfair subsidies and funds provided through state-owned enterprises, which the W.T.O. had previously ruled were not subject to its subsidy rules. Both are practices China has relied on.

Jennifer Hillman, a trade expert at the Council on Foreign Relations who has worked at both trade office and the W.T.O., said the statement represented “great promise to correct one of the major problems with the W.T.O. rules: its inability to discipline subsidies.”

“What remains to be seen is whether these good ideas can be brought into a formal agreement that is binding on China and others,” she said.