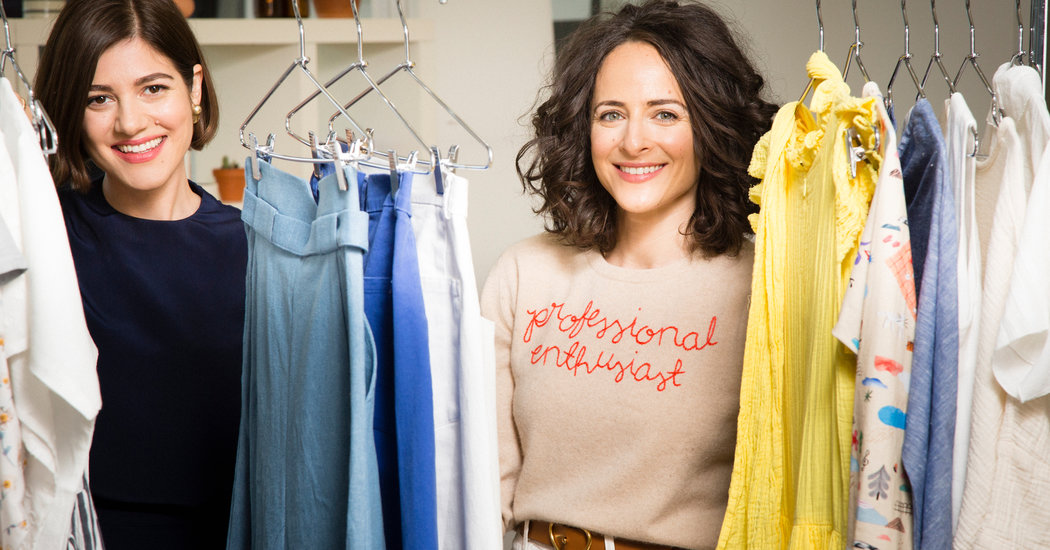 One cool thing about fashion — besides the bedazzled footwear, the outlandish cotton candy-colored fur and the enormous purses — is that a lot of very cool women work in it, a fact worth celebrating on Thursday, which is International Women’s Day. Yet when it comes to being the creative director of a grand design house or starting a splashy e-commerce brand, the boys still outnumber the girls. The three companies here are working to change that, applying an approach that stresses collaboration, communication and practicality to create and sell clothes that women crave. Best of all? They are each run by not one woman, but two!

Of a Kind: A Bazaar Run by Besties

Erica Cerulo and Claire Mazur, the founders of the Brooklyn online bazaar Of a Kind, can take their pick from a long list of things to be proud of. Like, for instance, the fact that they went out on a limb at a time when the internet still had training wheels (2010) to introduce an e-commerce platform (it sells limited-edition gems culled from their favorite designers and artists) and succeeded.

The women have been thinking a lot about partnership because that book they’re writing is called “Work Wives” and explores the power of female friendships to fuel successful businesses.

“If you think about the qualities inherent to the strongest female friendships — emotional transparency, collaboration, mutual respect and support — they lend themselves to partnerships in business,” Ms. Mazur said. “And they really do shift the dynamic in a professional environment when you put them front and center.”

Ms. Cerulo said: “It requires a certain amount of vulnerability. You have to bring your real self to work every day. And that’s something you don’t always see in traditional, patriarchal offices.”

For the free-spirited Los Angeles company Dôen, sisterhood is the center of everything. No surprise since the label was founded by Margaret and Katherine Kleveland, sisters who have made a point to extend the familial feelings to the group of women — friends, employees and supporters — they call their collective.

“Everything we do is definitely a collaboration,” Katherine said. “There’s no space for competition or inefficiency in our company. We take inspiration where we can get it, whether it’s an intern that’s wearing a really cool Victorian blouse or one of our friends.” Margaret said: “I think as women, and as mothers, we’re wired to collaborate.”

Listening to the women in their lives, as well as to their own sartorial barometers, has resulted in a collection of bohemian staples that straddles the line between something-special and everyday — or, as Margaret put it, “clothes that make you feel beautiful and feminine, that you can wear to the office, or out, but also get down on the floor with your kid.” It’s a distinctly feminine approach to design that’s grounded in the real world.

Everybody.World: Feel-Good Basics for All

If you need proof that retail is changing, just look at Everybody.World, a direct-to-consumer label in Los Angeles that eschews the traditional retail structure (and its limitations), to produce ethical, environmentally sound basics (some made entirely from recycled materials) that are anything but boring. It’s led by two women, Iris Alonzo and Carolina Crespo, who met while working at American Apparel.

“We left American Apparel in 2015, and we were thinking about what we should do next, what was important to us, and what we came up with was this idea of doing a brand that didn’t exploit the environment or workers, and that compensated creative people for their ideas,” Ms. Alonzo said. The company releases capsule collections every few weeks by different designers, who receive a 10 percent cut of the profit.

“Our only rule is that they can’t be trained designers,” Ms. Alonzo said. “The idea is to bring the platform to people who haven’t traditionally had an opportunity to make clothes, but who still have amazing ideas.” Recent collaborations have included a tracksuit designed by the model Adwoa Aboah and a pair of pants by a 14-year-old girl named Paloma whom Iris met while standing in line for the bathroom at a party.