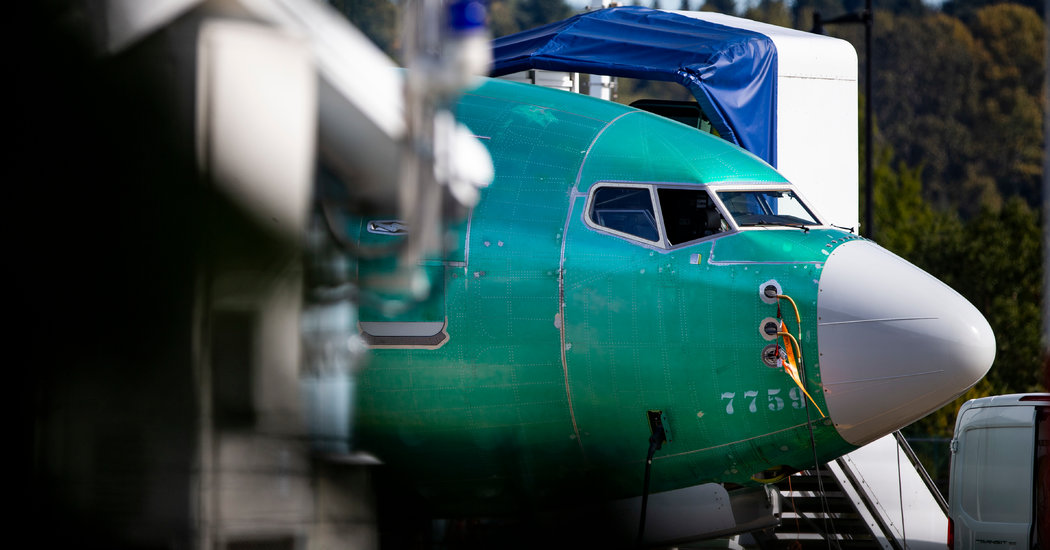 Early Friday morning, Boeing’s board gathered on a conference call that had been hastily arranged the day before. Dennis A. Muilenburg, the company’s chief executive and the chairman of the board, was not invited.

By the end of the day, a decision had been reached: Mr. Muilenburg would lose his title as chairman, a rebuke from a board that has defended Boeing’s senior leadership after two crashes of its 737 Max jet killed 346 people. The board elevated its lead independent director, David L. Calhoun, to replace Mr. Muilenburg as chairman.

For months, the Boeing board had resisted stripping Mr. Muilenburg of the chairmanship. In April, a shareholder proposal to split the chairman and chief executive roles was voted down, though by a smaller margin than last year. Mr. Calhoun said in an interview with The New York Times in May that the board regularly discussed splitting the roles, but felt confident in Mr. Muilenburg.

“We think we’ve got the right guy,” Mr. Calhoun said at the time.

But since then, the outlook for Boeing has worsened. The 737 Max, its best-selling jet and one of its biggest sources of revenue, remains grounded after seven months. New problems with the plane have continued to crop up, causing repeated delays, although the company says it expects the plane will be cleared to fly again by the end of the year. The company has struggled to persuade international regulators that it has developed an adequate fix for the automated system that contributed to both fatal accidents.

Boeing recently announced more than $8 billion in costs tied to the crashes, and its stock price has declined by about 15 percent since early March.

Boeing customers have lost hundreds of millions of dollars because of the grounding and are becoming increasingly impatient. They complain of inconsistent updates from the company about the status of the plane.

Executives at the company fear there will be long-term damage to their relationship with airlines, who may be tempted to defect to Airbus, Boeing’s biggest competitor.

“The relationship at the moment is rocky,” Michael O’Leary, chief executive of Ryanair, said in an interview. “Given that we are their largest customer in Europe, we are deeply disappointed. Our view is that Boeing has not addressed this as seriously as was warranted.”

The decision to strip Mr. Muilenburg of his chairman title was the culmination of a monthslong debate within the company over whether to hold top executives accountable.

Pressure on the board has mounted in anticipation of Mr. Muilenburg’s scheduled testimony in front of Congress at the end of the month, the first time a Boeing executive has appeared at a hearing related to the crashes. The board was eager to make a move before the hearing to avoid the perception that scrutiny from lawmakers prompted a change, according to a person close to the board who spoke on condition of anonymity to discuss internal matters.

After the second crash in March, the board began taking steps to assert its independence, with directors having more regular discussions that excluded Mr. Muilenburg.

But even after the board’s move on Friday, some lawmakers continued to question its oversight of the company.

“The mystery has been why the board has been seemingly silent and inert,” Senator Richard Blumenthal, a Democrat of Connecticut, said in an interview. “Key members of the board should be called to testify in public at a congressional hearing about what they know now and when they knew it.”

An engineer by training, Mr. Muilenburg is seen as a reluctant public speaker who has had trouble conveying emotion or sympathy when discussing the accidents.

Some inside Boeing have begun to question his judgment, believing that he has at times been overly optimistic about the schedule for returning the Max to service and too reluctant to discipline subordinates, according to several people familiar with the matter who spoke on condition of anonymity because of the sensitivity of the situation.

He has said in conversations with colleagues that there was no wrongdoing in the design and certification of the Max and that discussing accountability will distract from the company’s efforts to safety return the plane to service, according to four people familiar with the matter.

On Friday, however, a task force of 10 international regulators released a report that found that the Boeing hadn’t fully explained the automated system, known as MCAS, to the Federal Aviation Administration and that company engineers delegated to help certify the plane on behalf of the regulator had faced “undue pressure” internally. Last month, Boeing’s board made public the findings of its own review of the company’s policies, recommending changes to the design of future airplanes and a restructuring of its engineering group.

“Boeing’s leadership team is committed to our enduring values of safety, quality, and integrity as they implement the board’s recommendations and additional actions to strengthen and elevate safety,” a Boeing spokesman said in a statement on Saturday to The Times.

Behind closed doors, questions have also been raised among top executives about how Kevin McAllister, the head of Boeing’s commercial division, which produced the troubled plane, has managed the Max crisis, according to several people familiar with internal discussions who spoke on condition of anonymity because of the sensitivity of the situation. Mr. McAllister joined Boeing in November 2016, after the development of the Max was largely completed but before it had been certified by regulators.

He has been the focus of criticism from Boeing executives who worry that he has not been proactive enough in reaching out to airlines to explain what steps the company is taking in the wake of the two accidents, according to the people familiar with the matter.

Mr. McAllister had previously worked at General Electric with Mr. Calhoun, the board’s new chairman, who was key in his hiring at Boeing. The commercial division, Boeing’s largest business, is facing problems beyond the Max, including manufacturing issues at its Charleston plant, cracking on the Max’s predecessor, the 737 NG, and the discovery of foreign objects inside the KC-46 tanker, a military aircraft that is built by the group.

In conversations with colleagues, Mr. McAllister has said that he believes he has been unfairly criticized because he inherited the Max problems from his predecessors, according to four people familiar with the matter. A group of board directors — Susan Schwab, a former United States trade representative; Adm. Edmund Giambastiani, a former vice chairman of the Joint Chiefs of Staff; and Nikki Haley, a former ambassador to the United Nations — has grown sympathetic to Mr. McAllister’s argument that he inherited the problems from his predecessors, two people familiar with the matter said.

Through a spokesman, Mr. McAllister denied he has made that claim.

“Clearly, Kevin is a huge question,” said Jeffrey Sonnenfeld, a professor at the Yale School of Management. “So many of the problems seem to be within his shop. When you’ve been on the job for three years, you can’t blame your predecessors.”

Rusdi Kirana, the founder of Lion Air, whose 737 Max was the first to crash, has been outspoken about his disappointment with the company, telling Reuters in April that Boeing officials “look down on me and my airline” and were using him as a “piggy bank.”

In recent months, Oscar Munoz, the chief executive of United Airlines, has expressed concerns to Boeing about uneven communication during the Max crisis, according to four people familiar with the matter.

Mr. O’Leary, the Ryanair chief executive, has had tense moments with Mr. McAllister, who is known to become emotional during meetings and has cried in front of colleagues when discussing criticism of his management style, according to five people with knowledge of the matter. Mr. O’Leary and Mr. McAllister have had heated disagreements since he took over the commercial division, the people said.

Mr. O’Leary denied that there have been any loud arguments or strains in his relationship with Mr. McAllister.

“He’s never gotten into a shouting and screaming match with me, because he would lose,” Mr. O’Leary said, noting that Mr. McAllister had called him that day.

In an April board meeting at Boeing’s headquarters in Chicago, Mr. McAllister watched as several members of his team gave presentations about the company’s progress on the Max, according to three people with knowledge of the meeting.

With the Max still grounded and questions swirling about Mr. McAllister, Boeing must now proceed with a chief executive who has been stripped of some of his power.

“People will read this as a little loss of confidence that the board has in Dennis,” Mr. Sonnenfeld said. “And rightly so.”