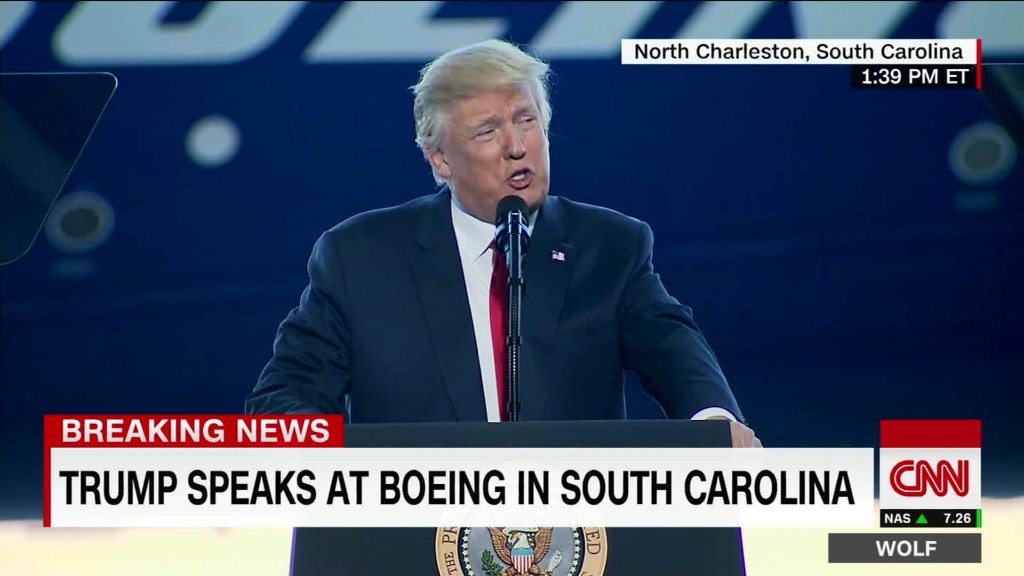 Boeing confirmed to CNNMoney Thursday that it’s cutting about 200 jobs at its plant in South Carolina. This is the first round of layoffs at the factory since it began making the 787 Dreamliner there in 2009.

Speaking at the plant in February, Trump promised a crowd of assembly workers, managers and executives that “jobs is one of the primary reasons I’m standing here today as your President, and I will never, ever disappoint you.”

It’s the latest in a series of job cuts for Boeing.

Related: How Boeing got on Trump’s good side

Back in March, Boeing (BA) said it will cut jobs at its commercial jet factories in Washington State. A source told CNNMoney at the time that those cuts involved less than 500 positions.

Workers at Boeing’s Washington State factories are mostly unionized, represented by either the International Association of Machinists or the Society of Professional Engineering Employees in Aerospace.

Employees at the South Carolina plant are not unionized.

Related: Boeing moves ahead with job cuts as 1,800 take buyouts

Both rounds of job cuts come after Boeing offered buyouts earlier this year. Unions reported that at least 1,800 Boeing employees took those voluntary offers. The buyouts were also offered to some non-union workers — but Boeing would not say how many accepted.

The company has also notified staff of plans for additional job cuts in December, which the unions say they are bracing for.

The aerospace giant has been cutting staff to reduce costs since early 2016, primarily through buyouts and the attrition of executives, managers and engineering staff.

Related: Boeing vs. Airbus: A new winner emerges at the Paris Air Show

After years of record sales, the pace of orders for Boeing’s twin-aisle jets, including its 777 and 787 Dreamliner, has slowed significantly. Boeing is cutting back production of its current generation of 777 jets, its most profitable model, by nearly 60% from its peak.

Boeing has said it’s adjusting its employment to account for that lost revenue while offering lower prices to airlines, and boosting profit margins for Wall Street.

As of February, Boeing employed about 147,700 people worldwide. About half of its employees work in its commercial aircraft unit.