And then there were three.

There was just one problem: While Sierra Nevada was working up a “Dream Chaser” spaceplane to deliver supplies to ISS, and was designing it to be reusable as many as 15 times to keep costs low, what Sierra Nevada did not have was a rocket able to put the Dream Chaser into orbit even once. What this meant was that, in order to fulfill its contractual commitment to make “a minimum” of six supply runs to ISS, Sierra Nevada would have to find a partner to get it into orbit.

Last week it found that partner. 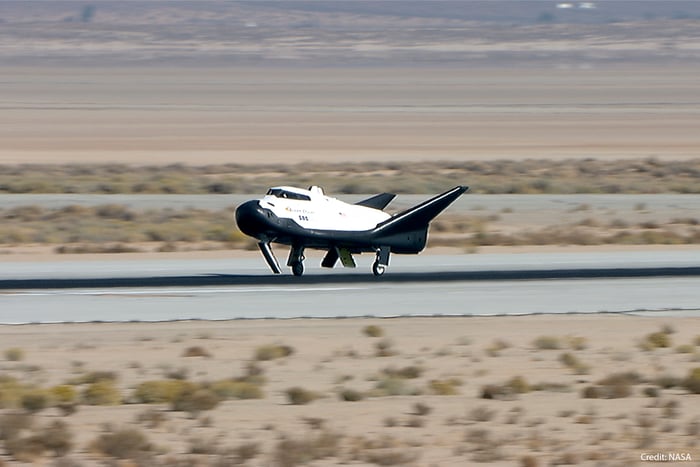 Sierra Nevada and United Launch Alliance: Together at last

Sierra Nevada said that Vulcan will carry the Dream Chaser to the ISS six times on its inaugural mission in 2021, loaded with up to 12,000 pounds of cargo for the astronauts; each time, it will depart from ISS carrying 7,000 pounds of scientific experiments (and ISS trash), reenter Earth’s atmosphere, and land them safely on a runway, touching down exactly like what it is — a (space) plane.

What it means to investors

For Sierra Nevada, this is a significant development. With help from ULA, the company will become a key member of the team of companies keeping the ISS in business, and gain itself a toehold in a space economy that’s on the verge of expanding to the moon .

But this new partnership is arguably even more important for Sierra Nevada’s new partner, ULA, and for the two companies that own it, Boeing and Lockheed. Surprising for companies of their size, especially given their intimate ties to NASA , Boeing and Lockheed have repeatedly been shut out of past Commercial Resupply Services contracts, losing to lower-cost competitors. Through the partnership with Sierra Nevada and its reusable spaceplane, however, Boeing and Lockheed have finally found an “in” to the lucrative ISS resupply business, which is generating revenue of nearly $2 billion annually for its contractors over the period running from 2016 to 2024.

ULA’s win is also a big vote of confidence in its new Vulcan Centaur rocket , which technically hasn’t even been built yet. (Although initially scheduled to enter service in 2019, Vulcan’s first launch has since been pushed out to 2021 at the earliest.) As ULA CEO Tory Bruno noted in a statement on the Sierra Nevada contract, “this is one of the first contracts for our new Vulcan Centaur rocket, and the first of the six missions will serve as the rocket’s second certification flight” — helping to win Vulcan the right to bid on additional contracts for NASA once that certification is in hand.

Boeing and Lockheed bet the company

Vulcan is absolutely crucial to ULA’s future as a space contractor — partly because it’s expected to “cost significantly less than [ULA’s Atlas V heavy launch rocket] while offering the same reliability,” according to ULA vice president of major development Mark Peller, and partly because it’s the first part of ULA’s plan to develop reusable rocket technology to close the technology gap between itself and SpaceX.

Even more than that, though, Vulcan represents a “bet the company” gamble that ULA is making, and that Lockheed Martin’s $10 billion annual space business (and a good portion of the $23 billion that Boeing Defense, Space & Security makes, according to S&P Global Market Intelligence data) are making vicariously. As Peller explains, Vulcan “can do what the full family of Atlas and Delta rockets can do.” Relying on that promise, ULA intends to replace its existing families of Atlas V and Delta IV rockets, and build nothing but Vulcans after 2021.

The 2021 Dream Chaser launch could be our first clue whether that bet will pay off.

10 stocks we like better than Boeing
When investing geniuses David and Tom Gardner have a stock tip, it can pay to listen. After all, the newsletter they have run for over a decade, Motley Fool Stock Advisor , has quadrupled the market.*

David and Tom just revealed what they believe are the ten best stocks for investors to buy right now… and Boeing wasn’t one of them! That’s right — they think these 10 stocks are even better buys.