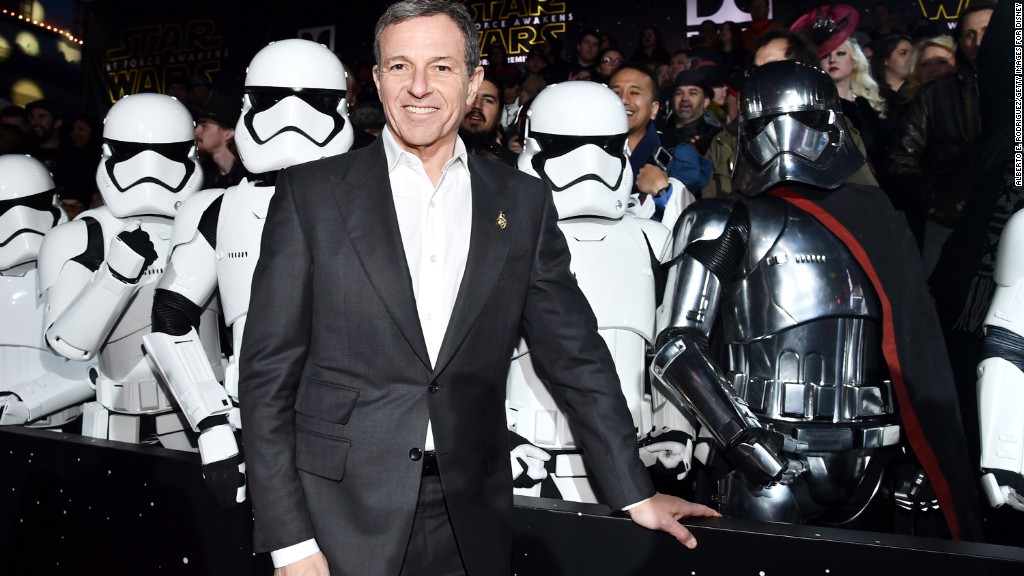 Bob Iger could wind up being the CEO of the 21st century after sealing a deal to scoop up a big chunk of the entertainment assets of 21st Century Fox for more than $50 billion.

Much like billionaire industrialist Tony Stark — aka Iron Man in the Disney (DIS)-owned Marvel franchise — Iger has now built a massive movie and TV empire that is rivaled by nobody else in Hollywood.

Under Iger’s watch, Disney has scooped up “Toy Story” and “Finding Nemo” animated studio Pixar, Marvel Entertainment and its stable of superheroes from “The Avengers,” and Star Wars owner Lucasfilm.

The purchase of the Fox (FOXA) film studio, along with some regional sports networks, cable channels FX and National Geographic and Fox’s stake in streaming video network Hulu, is yet another move by Iger to make Disney a content company that literally has entertainment brands that can hook boys and girls from cradle to grave.

The Fox deal is particularly significant for Disney’s Marvel franchise because it will give Disney ownership of some of the few Marvel characters it didn’t previously own, most notably Wolverine and the rest of the X-Men, Deadpool and the Fantastic Four.

The Fox acquisition also gives Disney the rights to “The Simpsons” — which is one of the only things in Hollywood that has lasted longer than Iger’s tenure as Disney CEO. Iger took over for Michael Eisner in 2005.

Speaking of that, the Fox deal also ensures that Disney doesn’t have to worry about finding a new leader to replace Iger just yet.

Iger has agreed to stick around as the Head Cheese of The House of Mouse through the end of 2021.

Will Iger agree to stick around even longer though? It’s a question worth asking. While Disney does not own the rights to “The Godfather” movies — yet? — Iger must feel a lot like Michael Corleone. “Just when I thought I was out … they pull me back in!”

Iger originally planned to retire as Disney (DIS) CEO in April 2015. That date was subsequently pushed off to June 2016.

Disney did seem to have a succession plan in place a few years ago after Thomas Staggs, the head of Disney’s lucrative theme parks division, was promoted to the role of Disney’s chief operating officer in 2015.

But Staggs stunned the media world and Wall Street in April 2016 when he announced that he was planning to leave the company.

Related: Here’s what Disney will (and won’t) own after the Fox deal

Those three remain at their current jobs. And with Disney planning to start its own streaming network, likely means it won’t buy Netflix and bring Hastings on board.

And while there was some chatter that the purchase of the Fox assets could solve the succession problem by having Fox CEO James Murdoch, the son of Rupert, become Iger’s heir apparent.

But Iger seemed to shoot down that talk. He told “Good Morning America” (which airs on Disney-owned ABC) Thursday that while James Murdoch will be “integral to the integration process … he and I will be discussing whether there is a role for him or not at our company.”

So Iger isn’t going anywhere anytime soon. And he will continue to be paid handsomely for his services.

According to a filing with the SEC Thursday, Disney said that Iger’s annual salary will increase from $2.5 million to $3 million. He’ll get another pay bump to $3.5 million once the Fox deal closes.

Iger will also be eligible for up to $45 million in performance bonuses and will receive more stock options as well.

Now Iger just needs to find a way to fix Disney’s struggling ESPN cable channel to truly cement his legacy. Despite all the big moves he’s made to boost the movie studios, ESPN’s woes have continued to put a lid on Disney’s stock this year.

Shares are up just 3%, well below the broader market’s gains. And Disney fell slightly last year, making it one of only three Dow stocks to finish 2016 in the red. Nike (NKE) and Coca-Cola (KO) were the others — and they have both done better than Disney this year.