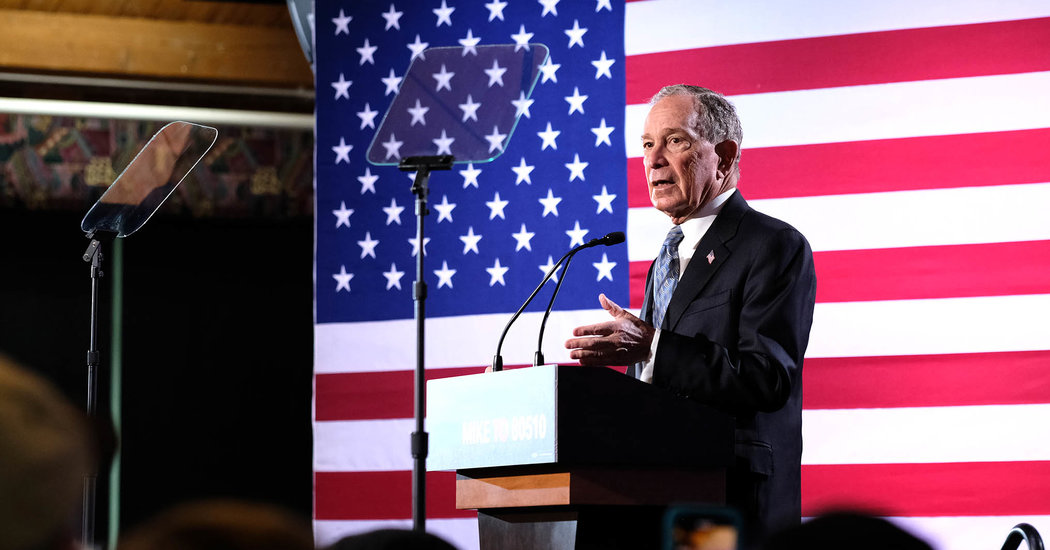 John Micklethwait, the editor in chief of Bloomberg News, walked into his Washington bureau on a Friday morning in December with a daunting task: explaining to his political reporters how to cover a presidential campaign when the boss is a candidate.

Addressing roughly 100 journalists spilling out of a glass-walled conference room, Mr. Micklethwait said Michael R. Bloomberg’s entry into the Democratic race had not changed his commitment to skeptical coverage. “We always knew it would be tough,” he told the group. “But we are actually showing what we are: an independent news organization.”

Not every reporter was reassured. Rival candidates had attacked the journalists’ coverage as biased; some sources had stopped returning calls. One reporter said the bureau’s credibility was at stake, citing Mr. Micklethwait’s public memo that Bloomberg News would refrain from “investigating” Mr. Bloomberg and his Democratic competitors.

Mr. Micklethwait said he had been referring to a team of specialized investigative reporters and not the broader political staff, but he declined requests from the journalists in the room to issue a clarification. Many reporters left feeling unsure how to proceed, according to several people who described the previously unreported town hall meeting.

Two months later, the pressure and unease inside Bloomberg News have only increased. Journalists who hoped Mr. Bloomberg’s candidacy would prove short-lived have watched him vault to the upper tier of the Democratic race. Now there are discussions about what a President Bloomberg could mean for a news organization already grappling with a perceived conflict of interest.

There are few precedents for a media mogul in charge of a major news operation seeking the presidency, though William Randolph Hearst, a Democratic candidate in 1904, enjoyed cheerleading coverage from his network of newspapers.

But Mr. Bloomberg’s presence looms large for the 2,700 journalists at his financial data company. New employees receive a copy of his autobiography, “Bloomberg by Bloomberg,” and company guidelines prohibit coverage of his “wealth or personal life.” In 2018, Mr. Bloomberg told an interviewer: “I don’t want the reporters I’m paying to write a bad story about me.”

That policy proved awkward during Mr. Bloomberg’s three terms as mayor of New York City and in his subsequent life as a billionaire philanthropist and political donor. Now it is bordering on untenable, according to interviews with half a dozen Bloomberg journalists who requested anonymity, citing fear of retribution from bosses who emphasize discretion.

When Mr. Bloomberg declared his candidacy in November, Mr. Micklethwait, an Oxford graduate and former editor in chief of The Economist, pledged in the memo he sent to the staff that the news outlet “will write about virtually all aspects of this presidential contest in much the same way as we have done so far.” But he said Mr. Bloomberg would remain off-limits from investigations, “and we will extend the same policy to his rivals in the Democratic primaries.”

Bloomberg News’s campaign reporters operate separately from the news outlet’s Projects and Investigations team. But the memo was widely perceived as a signal that Bloomberg News would cease accountability coverage of the Democratic field, even as Bloomberg executives called that a misunderstanding.

Mr. Micklethwait told reporters at the December town hall that Bloomberg News management had not prevented any political story from being published. “If you look at what we’re doing and the pieces we’re writing, any doubt that we’re reporting this aggressively disappears,” he said.

Political reporters at Bloomberg News, however, say the memo left them vulnerable to undue criticism from readers and campaign aides. And they express frustration that it suggested a level of internal censorship that they say is not reflective of their experience.

In December, the outlet published an article noting that Senators Bernie Sanders and Elizabeth Warren had criticized Amazon while paying the company for services. It was a run-of-the-mill story by the standards of a presidential race, where minor hypocrisies are fair game for journalists. But the candidates and their allies seized on the story to accuse Bloomberg News of bias.

There was outcry from Team Trump, too.

Because Mr. Micklethwait said in the memo that his staff would keep investigating the White House “as the government of the day,” the Trump campaign called Bloomberg News biased and barred it from covering its events. On the day of the Iowa caucuses, a Bloomberg reporter, Jennifer Jacobs, was escorted out of a Trump news conference outside Des Moines. (Mr. Micklethwait said in a statement last year that the Trump campaign’s “accusation of bias couldn’t be further from the truth.”)

Reporters are also battling a perception that Bloomberg News is an adjunct of its boss’s political operation.

Two opinion journalists at the company, Timothy L. O’Brien and David Shipley, who both previously worked at The New York Times, took a leave of absence to join the Bloomberg campaign. One editor at Bloomberg News jumped to the campaign, as well, along with a handful of staff members on the TV and video production side.

Mr. Micklethwait has had no contact with Mr. Bloomberg or his campaign since he declared his bid, according to a spokeswoman for Bloomberg News.

The distinction has not stopped critics like Ms. Warren from accusing Mr. Bloomberg of betraying the First Amendment. “He should let reporters do their jobs and report on him, and everyone else, as they see fit,” Ms. Warren wrote on Twitter last month, adding: “This ban puts reporters in an impossible situation and undermines a free press.”

Mr. Micklethwait declined to be interviewed for this article. A spokeswoman for Bloomberg News said in a statement: “Over the past 30 years, editorial independence has been at the core of Bloomberg News. We are proud of the more than 760 articles Bloomberg News has published on the election and the candidates, not to mention a host of broadcast interviews, since Mike Bloomberg announced he was running for president.”

To reassure readers, the news outlet is updating an “Election Coverage Snapshot” on its website, citing a promise “that we would be as transparent as possible” about election coverage. Bloomberg News also carries coverage about Mr. Bloomberg written by competitors, like The Times and The Washington Post, on its subscription-only terminals.

One Bloomberg News journalist has been assigned full-time to cover Mr. Bloomberg’s bid: Mark Niquette, a veteran reporter based in Columbus, Ohio, who previously covered infrastructure.

He has not shied from reporting on negative developments. Last week, his byline appeared atop a 600-word article about an audio recording from 2015 of Mr. Bloomberg praising stop-and-frisk policing. On Sunday, Mr. Niquette co-authored a story on concerns about Mr. Bloomberg’s “comments about policing, women and race.”

Mr. Niquette, who travels to many of Mr. Bloomberg’s campaign events, has also published a critical look at Mr. Bloomberg’s economic, health care and infrastructure plans under the headline “Bloomberg Offers Few Details to Back Up Trillions in Spending.”

In Washington, at the December town hall, Mr. Micklethwait said he was accustomed to hearing complaints about conflicts of interest. He cited Wall Street executives displeased with Bloomberg News’s coverage of their companies — companies that spend significant sums for access to Bloomberg L.P.’s financial data.

As for the challenges of covering his boss, Mr. Micklethwait noted that Mr. Bloomberg’s political second act could last anywhere from a few months to nine years.

It was a point not lost on the reporters gathered before him. The prospect of Mr. Bloomberg in the White House has become another matter of significant concern among Bloomberg News journalists.

If Mr. Bloomberg, as he has mused in the past, were to sell his company if elected, some journalists there believe a new owner may not be willing to subsidize an expensive news-gathering operation that is ultimately tangential to the company’s core product, the financial data terminals that command princely subscription sums from the investing class.

And if a President Bloomberg held onto his media organization, how would Bloomberg News reporters cover Washington and a federal administration controlled by the man ultimately responsible for their paychecks?

The company declined to comment on those questions, and reporters there say it is too early to earnestly begin preparing for such an eventuality.

As for Mr. Bloomberg himself, he was asked by CBS News in December about his staff’s concerns about not being allowed to investigate his rivals in the presidential race.

“You just have to learn to live with some things,” Mr. Bloomberg told the anchor Gayle King. “They get a paycheck. But with your paycheck comes some restrictions and responsibilities.”