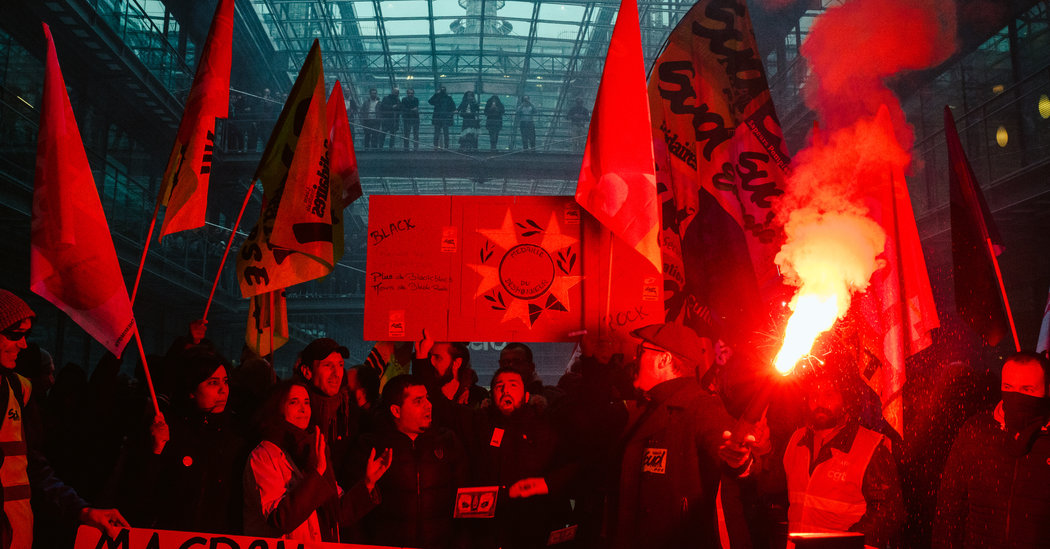 Just a few months ago, BlackRock, the U.S. money-management giant, was barely known to the general public in France. But as President Emmanuel Macron presses ahead with a controversial campaign to overhaul the French economy, the company has become a favorite target for growing anticapitalist sentiment.

Protesters claim BlackRock has tried to influence — and stands to profit from — Mr. Macron’s sweeping overhaul of the nation’s pension system. They point to cordial meetings between Mr. Macron and Laurence D. Fink, the founder and chief executive of BlackRock. And they fear the massive Wall Street firm — its $7 trillion under management is more than twice France’s economic output — is working behind the scenes to pick apart the country’s system of social protections.

The protests escalated with the action on Monday morning, when environmental activists who allege French workers’ pensions could be directed by BlackRock stormed the company’s offices.

Last month, it was trade unions and members of the Yellow Vest movement leading a raucous crowd to the historic Le Centorial building, where BlackRock has its offices, lighting flares and denouncing what they said was an effort to impose American-style free-market rules on France.

There is no evidence that BlackRock influenced Mr. Macron to push retirement savings to it or any other financial giant, although financial firms could get some business from part of the pension reform that encourages high-earners to invest in stocks.

And BlackRock strenuously denies the claims. “We deplore the fact that our company continues to be caught up in an unfounded controversy driven by political objectives,” it said in a statement. “We reiterate that BlackRock has never been involved in the current pension reform project and does not intend to be.”

Yet BlackRock’s role as an adviser to governments and central banks and as a major shareholder in some of the world’s biggest companies has quickly made it a symbol in a country that has long been deeply skeptical of capitalism and the stock market. The social climate here has grown more tense following recent nationwide strikes to protest the pension overhaul.

The attacks over BlackRock’s environmental policies come as the company has tried to portray itself as an industry leader in responsible investing. The protesters Monday cited BlackRock investments in the French oil giant Total and the construction company Vinci as running counter to that.

In an influential annual letter to leaders of the world’s largest companies, Mr. Fink said last month that his firm would make investment decisions with environmental sustainability as a core goal. On Wednesday, BlackRock said that one of its fast-growing green-oriented funds would stop investing in companies that get revenue from the Alberta oil sands.

Such actions have done little to placate the company’s growing cadre of critics in France, where it manages 27 billion euros in assets for local clients and invests over 185 billion euros, or $200 billion, in French equities, and corporate and government bonds.

Parliament will start debating next week the bill that aims to overhaul the nation’s convoluted pension system. Although the system has been criticized for being too generous, the incidence of poverty among older people in France is one of the lowest in the world — and far lower than in the United States.

The measure seems likely to pass because Mr. Macron’s party commands an absolute majority, despite attempts by opponents to obstruct the bill with more than 22,000 amendments. It is expected to move to the Senate in April.

In the meantime, more demonstrations have been called, including new strikes and protests next Thursday. BlackRock is likely to remain a ripe target for frustration.

The controversy broke open in December, when Mr. Macron unveiled details of his proposal to standardize France’s 42 different public and private pension schemes into one state-managed plan. Critics had already accused the president, a former investment banker, of favoring the rich with an earlier measure to reduce taxes on high earners, a step that resonated in a country where wealth is increasingly associated with injustice.

The document noted that the investment-wary French hold huge piles of savings in cash, bonds and nonfinancial assets, but “disappointingly” little in stocks. (A recent study by the International Monetary Fund showed that only 5 percent of French households’ total financial assets are in stocks. That figure is nearly 34 percent for U.S. households, according to 2016 data from the Organization for Economic Cooperation and Development.)

Soon, activists began circulating photos on social media of Mr. Fink sitting next to Mr. Macron at a green finance summit in the Élysée Palace last July as proof of chummy ties.

French media ran articles highlighting BlackRock’s assessment as a sign that the company was eager to see France’s state-run pension scheme tilt toward the American system, where workers often save for pensions through investments.

In reality, Mr. Macron’s blueprint would instead largely keep France’s publicly funded pay-as-you-go system in place, a point some trade unions have recently acknowledged. An editorial Wednesday in the French economic magazine Le Point defended BlackRock as being the victim of “conspiratorial diatribes,” adding that the company was being made into a “new French scapegoat.”

Opponents insist that Mr. Macron’s plan still opens France to the influence of companies like BlackRock.

They point to a measure that would cut pension payroll taxes on people earning more than 120,000 euros annually — less than 1 percent of France’s work force — and encourage them to invest in private pension funds.

Addressing the National Assembly, Olivier Marleix, a conservative lawmaker from France’s Les Republicains party, said the proposal would divert money away from France’s social safety net. “You are offering three billion euros to pension funds,” he said. “BlackRock’s business will thrive in France.”

It didn’t help BlackRock’s image among dissidents when Mr. Macron elevated the president of BlackRock France, Jean-François Cirelli, a former civil servant who worked for two previous French presidents, to the rank of officer of the Legion of Honor, France’s highest order of merit, just as strikes over the pension reforms reached a crescendo in early January.

The news lit up social media and triggered a fresh storm of criticism that the American fund was too cozy with Mr. Macron, and would profit from the pension changes.

“BlackRock is simply the dark side of the pension reform,” Olivier Faure, the secretary general of France’s Socialist Party, told French television.

Mr. Cirelli hit back at what he said was “an unfounded and irrational” controversy.

“We are being used for political ends in a conflict that is not ours,” he said, adding that BlackRock “is not a pension fund, does not distribute any retirement savings product, and has no intention of doing so.”

Such statements have not appeased opponents. “BlackRock is an emblem,” said Benoît Martin, the head of the Paris branch of the militant General Confederation of Labor, or C.G.T. union. Mr. Martin said he was among the first wave of protesters to storm BlackRock France’s headquarters in January.

“You have Larry Fink meeting with President Macron,” he added. “We’re concerned about the influence of BlackRock in French politics.”

The union has called for more demonstrations and strikes to protest the changes. And BlackRock, Mr. Martin said, would likely remain a target.

Youth for Climate France, one of the groups that ransacked the offices on Monday, said in a statement that the protests were “symptomatic of capitalism, which is at the origin of these problems.”