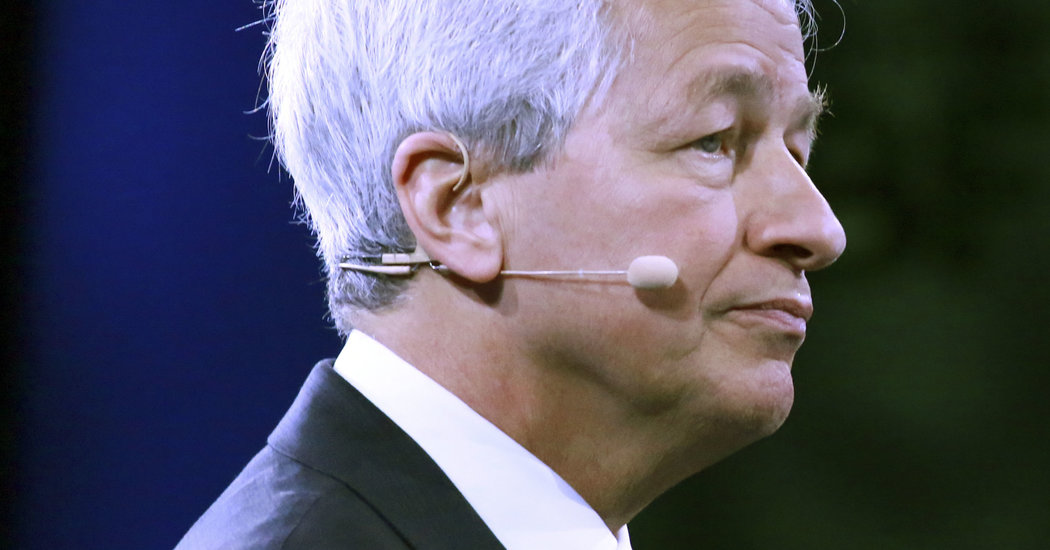 The heads of America’s largest banks have been some of the country’s most prominent optimists over the past two years, shooing away questions about the potential effects of President Trump’s trade policies, cheering his tax cuts and offering periodic reassurances that things would all work out for the American economy.

But manufacturing activity and job growth are slowing, and trade talks with China that have so far produced only a “Phase 1” agreement that still has to be written and signed. And bankers are starting to worry.

“Of course there’s a recession ahead — what we don’t know is if it’s going to happen soon,” Jamie Dimon, the chief executive of JPMorgan Chase, said during a call on Tuesday with journalists to discuss the bank’s third-quarter earnings.

Even as his bank announced record high revenue, Mr. Dimon warned the strong position of consumers in the United States had come under pressure from “increasingly complex geopolitical risks, including tensions in global trade.”

The warning was new: Just six months ago, during another discussion of the bank’s earnings, Mr. Dimon had predicted that United States economic growth “could go on for years.”

“We’ll just have to wait and see,” he said on Tuesday.

JPMorgan’s quarterly earnings were no worse for wear. The bank took in a record $29.3 billion during the third quarter and earned $2.68 per share, beating analysts’ expectations by 23 cents. Its deposits grew by 3 percent compared with the same period last year.

The report from Goldman Sachs, which also announced third-quarter results, along with Citigroup and Wells Fargo, was less rosy. The bank’s net earnings of just under $1.9 billion for the quarter were 26 percent lower than the same period last year and 22 percent lower than the second quarter of 2019. Goldman also announced it had set aside $291 million for credit losses, a 67 percent increase from last year.

The bank’s chief executive, David Solomon, shrugged off some of the recent turmoil on Wall Street, which has included disappointing debuts by tech companies like Uber and botched initial public offerings like WeWork, saying he believed the I.P.O. market was in fact healthy. But, he said, the bank was closely watching “where we are in the economic cycle” as it manages risks across the firm.

Citigroup’s chief financial officer, Mark Mason, said on a call with journalists that the bank had begun making adjustments to its business operations to accommodate changing economic conditions.

“We’ve been very thoughtful about the pacing of our hiring,” he said.

Citigroup’s revenue was $18.6 billion, slightly lower than the previous quarter but a bit higher than its third-quarter revenue a year ago. But its corporate lending revenue decreased by 6 percent compared with the same quarter last year. Citigroup’s business customers have been showing “pause,” Mr. Mason said, “in terms of whether they actually want to invest in building out facilities or operations, pause in terms of whether they want to consider entering into new markets.”

That was a subtle but significant admission that the slowdown was affecting Citigroup’s business.

The bank’s chief executive, Michael Corbat, has been saying for months that its global footprint allows it to take advantage of shifting trade routes so that the president’s tariffs did not actually hurt the bank. He offered a more troubled view on Tuesday during a call with analysts.

“It has caused a slowdown in terms of trade,” Mr. Corbat said of the trade war. “If we could start to get some clarity on some of these things, where I think businesses can have some more surety on the future, our trade business would definitely benefit from that.”

Wells Fargo reported $22 billion in revenue for the quarter, slightly more than the $21.9 billion it generated in the same three months a year ago, and said it had $50 million left over from what it had set aside for loan losses in the most recent quarter.

And the bank’s chief financial officer, John Shrewsberry, pointed to a different concern that was closer to home for his business clients. “To date, while our customers are cautious, the most common concern they identify is their ability to hire enough qualified workers,” he said on a call with analysts.

Wells Fargo, the country’s fourth-largest bank, is still operating under growth restrictions imposed by its regulators and its per-share earnings of 92 cents were lower than analysts’ expectations because of expenses from legal woes stemming from a series of scandals that began to come to light in 2016.

The bank has continued to stumble lately. Its chief executive stepped down suddenly in March not long after he was grilled by lawmakers over lingering problems, and The New York Times reported in August that customers who had their accounts closed were still being charged fees for activity after their closure date. The bank’s interim chief executive, C. Allen Parker, told analysts that Wells Fargo was still looking into the matter.

Wells Fargo reported a $1.6 billion charge for legal expenses related to “one of the largest lingering issues related to sales practices,” Mr. Shrewsberry said, but declined to go into details.