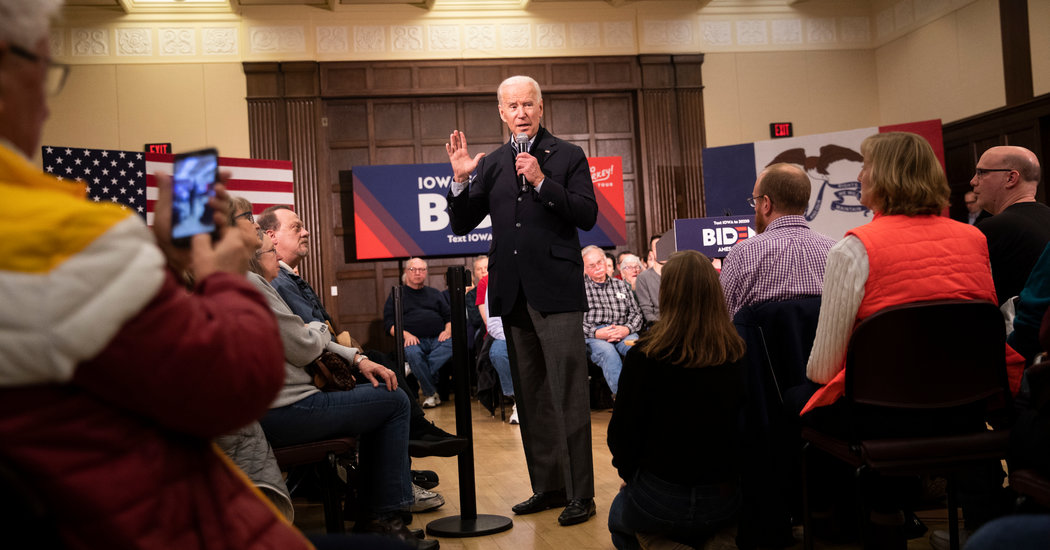 WASHINGTON — The Democratic presidential candidate Joseph R. Biden Jr. would raise taxes on high earners and corporations by at least $3.4 trillion over the course of a decade if elected, his campaign said Wednesday, releasing a set of plans that are far less aggressive than his more liberal rivals’.

Mr. Biden would raise a much smaller amount of tax revenue from the wealthiest Americans and businesses than his rivals Senators Bernie Sanders of Vermont and Elizabeth Warren of Massachusetts, who have each proposed wealth taxes on the assets of billionaires and some multimillionaires, along with corporate tax increases.

The gulf in tax proposals mirrors the candidates’ divide on plans for new government spending. Ms. Warren and Mr. Sanders want to spend trillions of dollars more per year on new federal programs, including Medicare for All and student debt relief, than Mr. Biden has suggested.

It remains possible that Mr. Biden could propose additional spending plans and other new taxes to help pay for them. But his tax increases are already more than double the amount that the last Democratic presidential nominee, Hillary Clinton, proposed in the 2016 campaign.

While less aggressive than his rivals’, Mr. Biden’s proposals reflect a growing focus among Democrats to reduce economic inequality through higher tax and spending programs.

The list of proposals he released Wednesday shields more Americans from tax increases than Ms. Warren’s or Mr. Sanders’s would, and it tweaks — rather than scraps entirely — President Trump’s tax cuts for corporations.

Mr. Biden has cast his plans as both progressive and achievable, a contrast the campaign sought to underscore with the details it released. They include revenue projections that are more conservative than some of his opponents’.

For example, Mr. Biden projects raising less than $2 trillion over a decade from all of his corporate tax increases combined. Ms. Warren forecasts she can raise more than $2 trillion solely by cracking down on companies that underpay their American tax liability.

Mr. Biden “is committed to being transparent with the American people about the smart and effective ways he’d pay for the bold changes he’s proposing,” said his policy director, Stef Feldman. “He believes that being forthright with voters about how plans would be financed is critical to building the public support necessary to beat Donald Trump, help more Democrats win up and down the ballot, and then pass legislation through Congress.”

Some high-earners — those who make around $450,000 a year — would pay lower tax rates under Mr. Biden’s plan than they did during the Obama administration, when Mr. Biden was vice president. That is a deliberate choice by Mr. Biden: He proposes returning the top income tax bracket to 39.6 percent, after Mr. Trump’s 2017 tax law cut it to 37 percent.

But Mr. Biden would only subject individuals’ income above $510,000 to that top rate. Before the Trump tax cuts, the top rate started at just under $420,000 for individuals.

Mr. Biden would also repeal a limitation that the Trump tax law placed on the deduction of state and local taxes from federal taxes. The law capped the so-called SALT deduction at $10,000 for individuals or households, a change that raised taxes on some higher-earning taxpayers in high-tax and predominantly Democratic states like California, New York and New Jersey.

Corporations would also be subject to a lower rate under Mr. Biden’s plan than they were before the passage of Mr. Trump’s tax cuts. The 2017 cuts reduced the corporate rate to 21 percent from a high of 35 percent. Mr. Biden would raise it to 28 percent — the same rate Mr. Obama proposed in a tax overhaul plan he was unable to push through as president.

Mr. Biden would unambiguously raise taxes on millionaires, and not just by lifting the top rate. He would raise the tax rate on capital gains — the proceeds from the sale of a stock, vacation home or other investment asset — to 39.6 percent from 23.8 percent, for taxpayers earning more than $1 million a year. He would also limit those taxpayers’ itemized deductions and eliminate an inflation adjustment at death that reduces capital gains liabilities for wealthy heirs.

Mr. Biden would raise additional tax revenues from multinational corporations whose effective tax rates are below the 21 percent corporate rate by enacting measures aimed at discouraging companies from shifting profits overseas. The proposals target companies like Amazon and Apple that report little or no federal tax liability.

They include a type of alternative minimum tax of 15 percent on companies’ total revenues worldwide, with credit given for taxes paid in foreign countries. A similar, but not identical, proposal from Ms. Warren would tax companies on the difference between their foreign taxes paid and her proposed American corporate rate of 35 percent.

Another of Mr. Biden’s plans would double the rate of a new minimum tax of sorts, which was established by Mr. Trump’s tax law and which applies to certain income from multinationals.