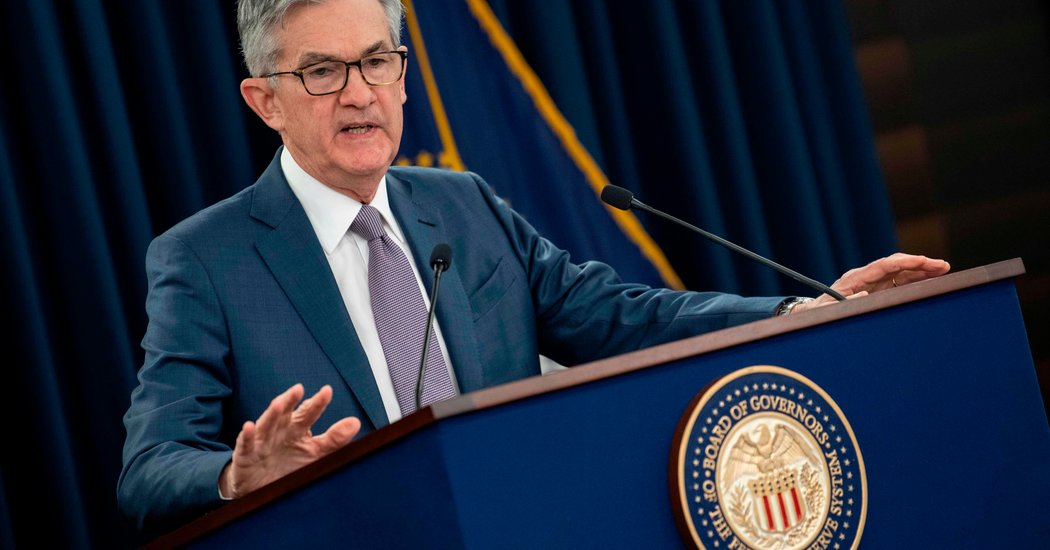 WASHINGTON — When Jerome H. Powell, the Federal Reserve chair, and Treasury Secretary Steven Mnuchin appear before the House Financial Services Committee on Tuesday, they are likely to field a volley of questions on the Fed’s never-before-tried efforts to help big companies fund themselves.

The Fed managed to unstick the corporate bond market — in which large firms sell debt to willing investors in order to finance operations — in late March and early April by simply promising to get into the market and buy bonds. In May, it began to actually intervene in the market by purchasing exchange-traded funds, which track a broad index of bonds but trade like stocks. In mid-June, the Fed began directly buying bonds that had already been issued, using an index it had created to guide those purchases.

Accusations that the central bank bailed out big companies started even before it had actually spent a penny on the efforts. Fed officials say they just are trying to encourage smooth market functioning without giving any individual firm a boost, and that by helping big employers, the policies safeguard the overall economy. The Fed is taking a formulaic approach to its buying, which could help to defend itself against any accusations of favoritism.

Here is what the Fed is doing, its rationale, and the lingering controversies around its approach.

What are the basics?

The Fed first announced on March 23 that it would buy corporate bonds on both the secondary market — the one for already-issued debt — and the primary market.

Both of those programs operate under the central bank’s emergency lending powers, which allow it to act as a lender of last resort to restore market functioning in times of crisis.

On April 9, the Fed announced that the two programs would be supported by $75 billion in money given to the Treasury Department as part of Congress’s recently passed coronavirus economic response package. The money was meant to back up $250 billion in secondary market purchases and $500 billion in primary market buying.

The programs are new territory for the Fed, which didn’t buy corporate debt even in the depths of the financial crisis. But they were unveiled at a time when the ability of companies to finance themselves by selling debt had ground to near-total standstill. The mere announcement that the Fed was coming to the rescue touched off a rush of new corporate debt issuance as markets began moving again and businesses raced to raise funding amid the coronavirus crisis.

What has the secondary market program bought so far?

The secondary market program got up and running first, buying Exchange Traded Funds — bundles of debt that trade like stocks — starting in mid-May. As of June 18, the Fed had bought about $5.3 billion in so-called E.T.F.s. The central bank announced on June 15 that it would begin to transition away from E.T.F. purchases and toward direct purchases of already-issued bonds, with the goal of matching a broad index it had created as a guide.

That index is meant to reflect the available universe of bonds that fit the program’s restrictions, with limits for individual issuers. The Fed put out details of the initial index on Sunday. It covers 12 sectors, includes 794 firms, and the companies with the highest weights are Toyota Motor Credit, Volkswagen Group America, Daimler Finance, AT&T and Apple.

On June 16 and June 17, the only days for which detailed data on individual bond purchases are available, the Fed bought about $429 million in bonds. The largest purchases were of Comcast, the pharmaceutical company AbbVie and AT&T bonds.

This does not mean the Fed is deviating from its plan to help your cable provider. On a day-to-day basis, purchases in the secondary program vary from the index based on what is actually available in the market. Detailed data on additional bond buying will be released roughly monthly on the program’s disclosure page, and the index composition will also be updated regularly to make sure it continues to track the market.

So far, aggregate figures on the corporate bond buying program show the Fed bought a total of $8.7 billion in bonds and E.T.F.s through Wednesday.

How does the primary market program differ?

The Fed’s primary market corporate credit program, which became operational on Monday, could provide more direct financing to companies. The program gives relatively healthy companies a last-ditch option to sell debt straight to the central bank program if they are struggling to raise funding. Unlike in the program that buys already-issued bonds, companies have to opt in to have the Fed buy their new debt. Analysts and the Fed itself expect few companies to do so.

That’s because the program is designed to be a backstop. To use it, a company must check several boxes: The firm must be unable to get “adequate credit” from banks and markets. It must be investment grade — meaning it is seen as a safe bet — or have been downgraded to junk bond status only after March 22. Even the so-called fallen angels — those companies downgraded after March 22 — must retain a relatively high junk bond rating and cannot use the program if they are deemed insolvent.

At the moment, fairly healthy companies are having no major problems issuing bonds, so there is little reason to expect that they would turn to the facility. That said, the program could help businesses to fund themselves if market conditions sour.

What are the critiques?

Senator Patrick J. Toomey, a Pennsylvania Republican on the oversight commission tasked with monitoring the Treasury-backed Fed lending programs, has questioned why the Fed is buying already-issued corporate debt at all, given how much markets have calmed down.

Mr. Powell has emphasized that it is important for the Fed to follow through on its promises to retain investors’ trust.

Other lawmakers, including Senator Elizabeth Warren, the Massachusetts Democrat, have urged the Fed to place more restrictions on companies that stand to benefit, including requiring companies that tap the primary corporate bond program to use the funds to retain workers.

“While Treasury and the Fed help financial markets and corporations, you are not holding up the other end of the deal,” Senator Sherrod Brown of Ohio, the top Democrat on the Banking Committee, said in a recent hearing. “We ask you to make sure that working Americans remain employed and safe.”

Mr. Powell has said the programs could support employment by helping businesses to survive.

Workers are “the intended beneficiaries of all of our programs,” he said in response to a question during a June 17 hearing, and “are able to keep their jobs because companies can finance themselves.”