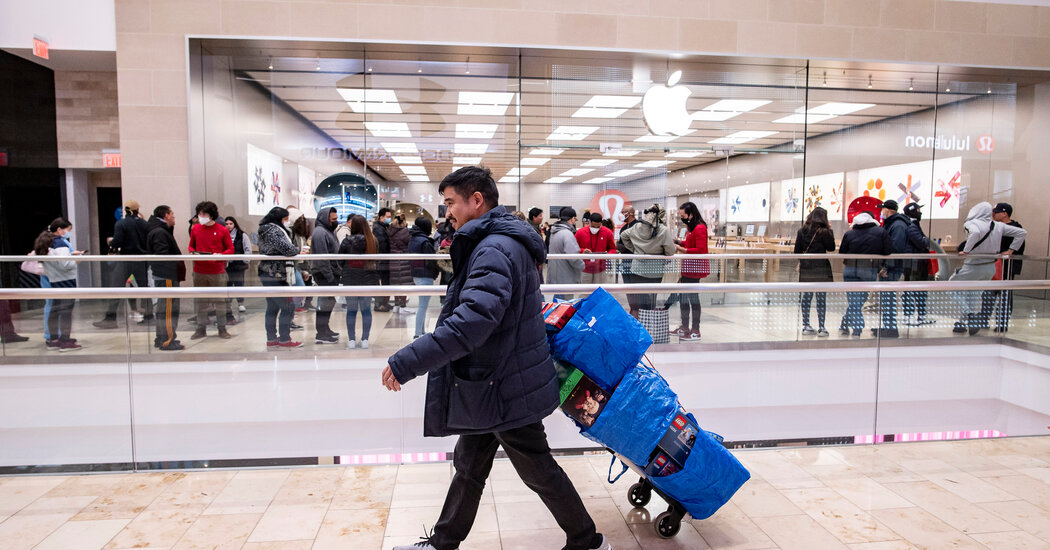 “Which way to the Lego store?” Mr. Tangara asked.

Mr. Daly pointed down the second-floor corridor with his two-way radio and detailed the path. Mr. Tangara thanked him and took off, passing customers standing in a long line at Lululemon, teenagers posing for selfies in front of Christmas decorations and workers vacuuming display windows before opening their doors.

Customers returned to the Bergen County shopping center on a rainy morning for holiday discounts. At Morphe, the health and beauty store, signs advertised “ONE. BIG. SALE-A-BRATION.” with products going for up to 70 percent off. At Pacsun, there were reminders of the economy’s needs. A buy-one-get-one-free poster was displayed in the same window as two announcements that the store needed assistant managers.

Last year, government restrictions limited the mall to 50 percent capacity on the busiest day of the retail calendar, but there were no such limits this year. Christmas music played as shoppers moved from store to store, and a steady stream of patrons flowing in and out during the morning.

Mr. Tangara spent more than a half-hour in the Lego store. When he checked out, he had filled all three of his IKEA bags with gift boxes for his children and collectible sets for him and his wife. He was out the door by 8 a.m.

“I have another Thanksgiving with family,” he said, hauling his gifts into the parking lot.