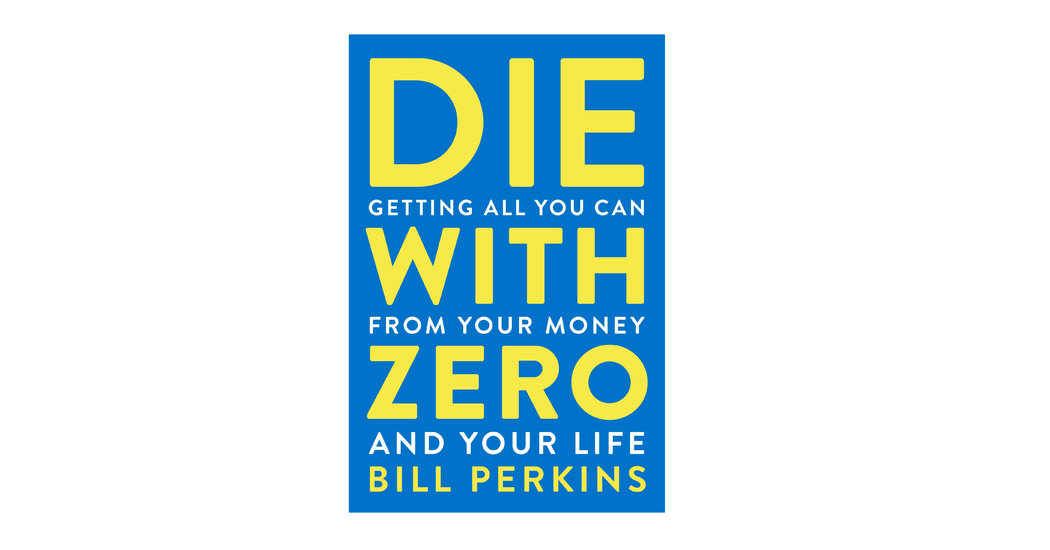 It’s easy to see why the publisher delayed releasing“Die With Zero” (Houghton Mifflin Harcourt, $27), which was originally supposed to be on sale in early May.

By that point, the coronavirus pandemic had hit with a vengeance, and close to 40 million people had filed for unemployment in the United States alone.

“Die With Zero” was intended to imply that you could live a long life and voluntarily spend all of your savings before coming to a happy ending. Suddenly an intriguing title became a scary one. It sounded like the nightmare goal of the coronavirus itself: death and impoverishment for millions.

With a title like that, publication even now is tricky, but I’m glad the book is out, because the ideas contained within are worth pondering for a future that may eventually include a return to a somewhat normal financial life.

I say that even though the book contains almost no investing advice. There is no substantive discussion of the merits of index funds versus picking individual stocks. And the subject of whether you need a financial adviser doesn’t come up at all.

So why is this book by Bill Perkins, a former energy trader who now heads a small consulting firm that primarily looks after his financial interests, worth your time?

Because it gets to the heart of two extremely important issues that you may be thinking about during these strange times: why you save and how you live.

Mr. Perkins wants to make sure, as the book says in its subtitle, that you are “getting all you can from your money and your life.” And he is fairly certain you are not.

“The premise of this book is that you should be focusing on maximizing your life enjoyment, rather than on maximizing your wealth,” Mr. Perkins writes. “Those are two very different goals. Money is just a means to an end. Having money helps you achieve the more important goal of enjoying your life. But trying to maximize money actually gets in the way of the more important goal,” because you keep putting off spending it.

“Your life is the sum of your experiences,” he adds. And he says if you are spending most of your time working to accumulate money, you are, by definition, shortchanging yourself on those experiences.

That’s why he argues that you should try to die with $0 in the bank, having spent the rest on living your best life.

Unfortunately, there are unanswered questions.

Now, the argument — summed up nicely by the book’s title — raises a bunch of questions, and Mr. Perkins addresses them, but not always as completely as I would have liked.

Question 1, does he practice what he preaches? The answer seems to be yes.

“Some of my friends call me an ‘honorary billionaire,’ which means exactly what you think it does,” writes Mr. Perkins. “I’m not actually a billionaire, but I spend like one.”

And he gives examples, such as throwing himself an elaborate party in St. Barts for his 45th birthday. He flew in guests, took over a “secluded hotel” and hired the singer Natalie Merchant to perform.

But while Mr. Perkins, 51, says the party’s expense, which he does not quantify, gave him pause, we have no idea what percentage of his net worth it represented. If it were 50 percent, it would be an impressive demonstration of his premise. If it were 1 percent, not so much. He neither tells us the cost of the party, nor his net worth.

Then there is the very real problem of running out of money before you die, an issue brought to the fore by the economic havoc accompanying the coronavirus. Mr. Perkins says that actuarial tables can give you a good idea of how long you are going to live, so you can estimate how much you will need. If you are still scared, you can buy an annuity to offset your risk, he says, although he doesn’t suggest any or what to look for in the investment.

Annuities can indeed provide you with a lifetime income. But that guarantee can be expensive, especially with today’s low interest rates. Say you are a 60-year-old Florida resident who wants to live on $6,000 a month for the rest of your life starting at age 65, and you decide to take Mr. Perkins’s idea to heart and spend all your money, using an annuity as your safety net. The annuity would cost you slightly more than $1 million today, according to the calculator found on the Charles Schwab website. If you wanted to have the annuity start immediately, the price would more than $1.3 million.

One of the reasons people try to die with more than zero is that they want to leave bequests to family members, especially their children, or to charities.

Mr. Perkins isn’t against that. But he argues that it is better to give as soon as you can, as opposed to waiting until you die, since family members, friends and the causes you wish to support can probably put the gift to good use immediately.

I don’t doubt that. But what he glosses over is that the value of your gift could probably be larger if you wait.

By delaying, you give the size of your gift time to grow, and if you invest the money earmarked for the bequest in something that produces annual returns greater than the inflation rate — as stocks traditionally do — the gift will end up being larger in real terms than if you gave the money now.

Mr. Perkins really doesn’t discuss this, or the power of compound interest, the fact that the interest on your money earns additional interest if you don’t withdraw it, another reason to defer making a gift or spending on yourself.

None of my objections negate the value of thinking about Mr. Perkins’s idea. But they do show that dying with $0 is a bit more complicated than it initially appears.

Mr. Perkins readily agrees he has given readers “an impossible task,” to die with no money left.

“You can closely track your health and life expectancy and you can recalculate your financials every day — yet you are not going to hit exactly zero. When you take your last breath, you might still have a few dollars in your pocket and maybe even hundreds more in the bank. And it’s OK,” he says. “By aiming to die with zero, you will forever change your autopilot focus from earnings and savings and maximizing your wealth to living the best life you possibly can.

“That’s why dying with zero is a worthy goal,” he adds. “With this goal in mind, you are sure to get more out of your life than you otherwise would have.”

It’s an intriguing idea, one that you may want to consider as the economy gets back closer to normal.