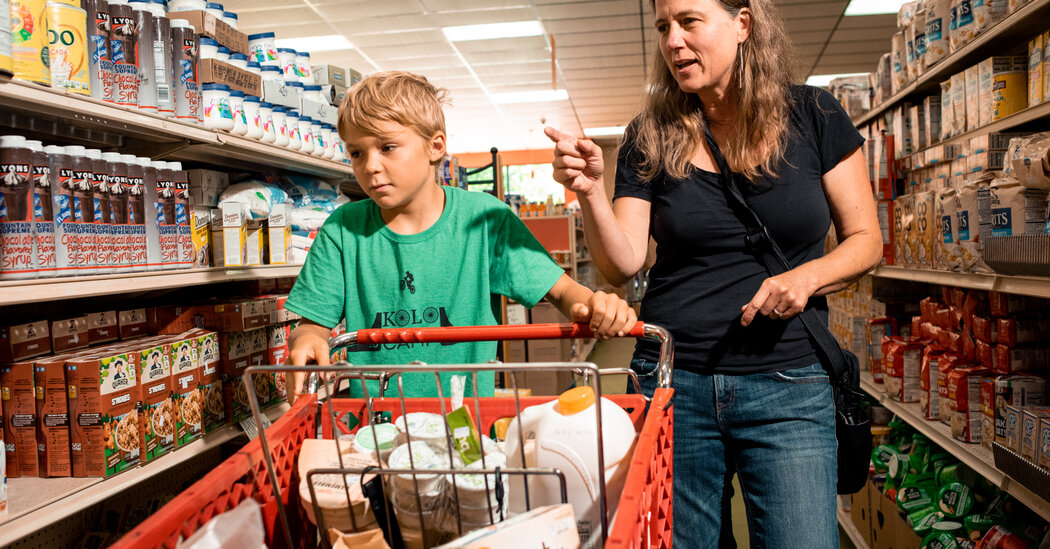 ASHEVILLE, N.C. — In a world where a jar of peanut butter costs a dollar more than it did last year and the price of a gallon of conventional milk inches up to $6 in some cities, paying $1.49 for a family-size box of crispy rice cereal can seem like a good idea, even if it’s August and the cereal is dyed red and green for Christmas.

At the salvage store, a deal is a deal.

With grocery prices 13.1 percent higher than a year ago, according to the Consumer Price Index for July, a new batch of customers has discovered the joys and pitfalls of shopping at salvage food stores, where a crushed box is never a problem, package dates are mere suggestions and questionable marketing attempts (Hostess SnoBall-flavored coffee pods?) go to die.

The stores, which traffic in what mainstream food retailers call “unsellables,” operate in a gray zone between food banks and big discount chains like the German import Aldi or Dollar General, which has grown to more than 18,000 stores.

With names like Sharp Shopper, the Dented Can and Stretch-a-Buck, salvage stores have long been a salvation for families on tight food budgets and the naturally thrifty. Adventurous shoppers looking for bargains use them for culinary treasure hunts. Now, the inflation-weary are joining their ranks.

Maggie Kilpatrick, a food blogger and cooking teacher in St. Paul, Minn., with celiac disease, visited a salvage store for the first time in June after the cost of her favorite gluten-free products skyrocketed. Someone in a gluten-free Facebook group mentioned a salvage store about 20 miles away.

“I was shocked,” she said. “There was lots of gluten-free, organic, high-quality stuff you never thought you would find in this dumpy little store in Fridley, Minn.”

A package of two baguettes from a company she loves usually sell for about $6.99. She picked up three packages for $5. Vegan butter was $1.99, about $5 less than she would pay at Whole Foods Market.

“I can see how people get hooked on it,” she said.

Many of the stores are small, and some don’t use checkout scanners or take credit cards, so getting a complete picture of nationwide sales is a challenge. An analysis of 405,101 receipts submitted by consumers to the consumer rewards app Fetch showed the number of households shopping at salvage stores in the first half of this year was more than 8 percent higher than a year earlier.

The manager of Dickies, a small chain in North Carolina, said sales were up 36 percent from last summer. Other store managers reported double-digit increases. “I’ve been seeing a bunch of people come in who haven’t been here before,” said Nicholas Duke, 27, who manages what had until recently been called the Price Is Right in this tourist-friendly city in the Blue Ridge Mountains.

The owners recently renamed the store Uplifting Deals. It’s part of a rebranding plan they hope will attract new shoppers, including people who once might have turned up their noses at places that sell tubes of frozen hamburger for $2 a pound, fading lemons and a jumble of items, from canned tomatoes to 99-cent bottles of celebrity-chef marinade.

“We’re trying to clean it up and show people it can be a real shopping experience,” Mr. Duke said.

In another twist, salvage food stores are drawing environmentally conscious consumers intent on doing what they can to reduce the $161 billion worth of food the Department of Agriculture estimates is dumped every year into landfills.

“Most people visiting my site are looking for ways to save money on groceries, and I hope I’m able to raise their awareness of food waste while they’re there,” she said.

The idea came to her after she grew frustrated helping a friend find a retailer to sell his flavored nuts, which Amazon was pulling from its platform as the best-by date approached. Visits to her site, she said, have more than tripled since last year, and now hover around 11,000 a month.

A handful of new waste-conscious companies have taken the salvage store concept online, shipping out bargains on meat and dairy products, stock overruns and food from farmers that might otherwise get tossed out.

“I think the food-waste-warrior mentality has gone hand in hand with the value seekers,” said Abhi Ramesh, who founded the home-delivery company Misfits Market in 2018. The company is growing fast, and has shipped more than 14 million orders since it started.

Salvage shopping has even spawned a tiny subgenre on social media, where people record their trips to the stores and display their hauls like trophies, piled on kitchen counters. In March, one TikTok video went viral, sending hundreds of people into an unprepared Oklahoma City store, where they stripped the shelves. The store closed shortly afterward.

One fan of the store was Thahn Tran, 53, a waste-savvy cook who is deeply invested in food politics and locally grown food. “I have no problems eating things past the due date,” she said. “I’m not a germophobe. I just use my sense of smell.”

As any smart salvage shopper knows, dates on food packages usually don’t mean much. Whether “sell by,” “best before” or “expires on,” they are intended to help stores and manufacturers control inventory, and to let consumers know when a product is at peak quality.

The federal government doesn’t require or regulate dates on any food except infant formula. Most states have rules about food dates, but they vary widely.

Last year, Congress began considering a uniform national rule that would use only two phrases: “Best if used by” to indicate quality and “use by” to indicate when a food might become unsafe to eat. Refed, an organization that researches food waste, said a universal standard would end the confusion that prompts people to toss $29 billion worth of safe, edible food each year.

“There’s nothing wrong at all with salvaged food or something that’s past the date,” said Sarah Kaplan, 29, who manages her family’s four Dickies salvage food stores in Asheville. “I’ve been raised on it all my life, and I’m not dead.”

Veterans of salvage shopping suggest that newcomers get to know the store and the staff, who can point out the real bargains.

Trust yourself and not labels, they say. Find out which days merchandise is delivered to the store, and get there early for the best selection. And make sure to pick a good store. They vary from chains whose stores would be at home in affluent suburban neighborhoods to homespun markets with cluttered shelves and softening vegetables.

“I’ve told a lot of my friends and co-workers, ‘You have to be willing to sort through the stuff that isn’t good to find what it is,’” said Molly Nicholie, the executive director of the Appalachian Sustainable Agriculture Project, based in Asheville.

Ms. Nicholie was loading $100 worth of groceries into her Prius one recent Saturday. Her three boys can go through a bag of granola and a gallon of milk a day, she said, “so either I’m spending $5 on a bag of granola at the regular grocery or 98 cents here.”

She uses the money she saves to buy meat from pasture-raised animals, and fruit and vegetables at local farmers’ markets.

Although she appreciates the savings, Ms. Nicholie enjoys the hunt. During her most recent trip, she found a pound of foil-wrapped European-style butter for $2.50. The shipping box, which held 36 pounds, had been ripped open and one wrapper was torn, so the distributor sold the whole case to a salvage food broker.

Food brokerages can be as small as a few ambitious people with a truck and some connections at a restaurant distribution warehouse. Others are sophisticated operations that work directly with food giants like Hormel or Mondelez.

Food producers need to unload vast amounts of extra inventory because they’ve reformulated a product or changed the package. Sometimes sales forecasts have changed. Manufacturers sell to stores or brokers who agree to keep the food out of the retail mainstream so the brand’s price strategy and image won’t suffer.

Some salvage store owners have direct relationships with grocery chains that have to clear out food that they have failed to sell at a discount, or that is nearing expiration dates. Some owners buy bread directly from the person driving a local delivery route.

It’s an unpredictable system whose currency is reputation, connections and hustle. And it has its share of bad actors.

“I knew people who would wipe dates off mayonnaise,” said David Fox, president of Java Holdings, a food and merchandise liquidator in Los Angeles. He got his start 31 years ago working for a company that was selling dented cans of vegetables from Northern California canneries hit by the 1989 Loma Prieta earthquake.

Now his company has 11 employees, several distribution centers and the ability to repackage and relabel surplus goods to hide the names of national brands. When the pandemic shut down travel, leaving cruise-ship lines and airlines with tons of frozen meals and vats of orange juice, he found buyers. When PepsiCo retired the Aunt Jemima brand in 2021 because of its racist overtones, he liquidated 50 truckloads of syrup and pancake mix.

“I’m addicted,” he said. “My best friend calls it a casino.”

Salvage stores and food banks aren’t in competition for surplus food, he said. The government caps how much food a company can donate for tax purposes. Food banks turn to salvage brokers when they need to buy specific items, like canned tuna or pinto beans, to round out what they give to families.

Some salvage store owners, especially in rural communities, see their stores as extensions of food banks, and view their work as a religious mission.

Hunter’s Salvage Grocery, near the Tennessee border in Trenton, Ga., is one of them. Stephanie Hunter, 47, runs the 4,000-square-foot store in a little strip mall. Customers toggle between her store and the Dollar General next door.

She has plenty of customers who were having a hard time feeding their families before inflation drove up food prices. It’s worse for them now, she said.

She prices her food as low as she can, though inflation is hitting the discount food market, too. At Hunter’s, cans of tomatoes are six for a dollar. A loaf of bread is $1. Last month she decided to offer a five-for-one special on infant formula to a father who was nearly in tears because he couldn’t afford more than one can.

Ms. Hunter orders food from a broker who assembles pallets of banana boxes filled with similar products, labeled “drinks” or “groceries.” But she never knows what she’s going to get.

She unpacks each order with the hopefulness of a birthday girl. Sometimes, the boxes hold nothing but disappointment.

“We get some things and you think, ‘It’s no wonder we got this, because it’s disgusting,’” she said. “Sometimes it’s really good, but something where someone was clearly late jumping on that trend train.”

And then there are those days when she hits pay dirt, like a load of coffee in K-cups, which go fast, or a case of Velveeta cheese, which she sells for $5 a block.