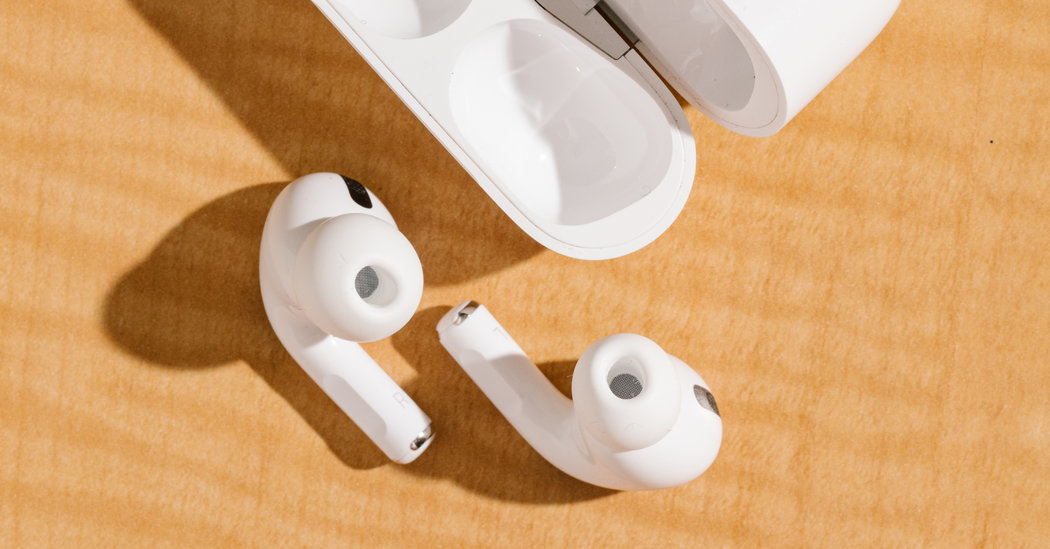 We are living in an era of “hearables” — earphones embedded with special sensors that talk to our phones. And Apple’s AirPods, those tiny white earbuds that live in a case the size of a Tic Tac box, are leading the trend.

For several years, I have found AirPods to be as convenient as they are useful. When Apple introduced them in 2016, it popularized wireless earphones with a special chip that connected them to an iPhone. When I popped them in my ears, they seamlessly connected with my device. And when I put them back in their case, their batteries replenished.

Now the AirPods are getting smarter — and costlier. The earlier-generation AirPods cost around $150. The latest model, AirPods Pro, is more expensive at $249.

But the new earphones, released about a month ago, offer noise-canceling technology. They use microphones to listen for ambient sound and to generate the opposite sound in your ears to reduce noise, like the roaring engines of an airplane and background chatter in an office.

The AirPods Pro also have a neat new feature known as transparency mode, which you activate by holding down a button on an earbud stem. The earphones then use their microphones to amplify the sounds around you, so you can hear your surroundings more clearly while listening to a podcast or music. This turned out to be my favorite new feature.

How good are the new AirPods for that much money? Compared with other high-end headphones, the AirPods aren’t the best at canceling noise. Yet they are competent and a good overall value, and so far, no one can beat the convenience of their compact design.

For several weeks, I compared the AirPods Pro with Bose headphones and a pair of older AirPods in various situations, including my daily commutes and on an international flight. Here’s how that went.

For me, noise-canceling headphones are most useful on a plane. The noises from the engines combined with the conversations of loquacious seat neighbors make it difficult to sleep.

So I wore the new AirPods on a recent 14-hour flight. I found several downsides. For one, the noise-canceling somewhat muffled the noise of the plane engines, but not enough to allow me to sleep. And because the AirPods are wireless, I couldn’t plug them into the screen in front of my seat to watch movies.

On the flight, I preferred Bose’s $350 QuietComfort 35, which are large wireless headphones worn over the ears. They significantly cut down on the engine noise, and they have a cord that could be plugged in to my seat’s audio jack to watch in-flight entertainment. But the Bose headphones are bulkier, though they have always fit fine in my carry-on bag.

As for the older AirPods, I never felt they were adequate to hear music or podcasts amid the engine noise. In the past, I left AirPods at home whenever I traveled.

Verdict: For frequent travelers, I recommend bigger, more effective noise-canceling headphones like those from Bose.

I wore the new AirPods Pro on several trains on the Bay Area Rapid Transit system. With noise-canceling turned on, the earbuds sounded good and did a fine job drowning out the conversations around me. But when the train came to a screeching halt, the earbuds were ineffective at muffling the earsplitting noise.

In similar tests, my Bose headphones sounded great on the train, but they, too, couldn’t muffle loud braking. This is to be expected: In general, noise-canceling technology reduces low-frequency sounds, not high-frequency noises like screeches or babies screaming.

On BART, when I wore normal AirPods, I could barely hear anything playing from the earbuds. I often didn’t bother to use them on the train.

Verdict: On noisy trains, the AirPods Pro are just as good as other noise-canceling earphones, and they are much better than normal AirPods.

The new AirPods were great to use outdoors. By turning on transparency mode, I was able to listen for cars while crossing the street and remain attentive while walking around less safe neighborhoods.

In contrast, the Bose headphones lacked a transparency mode (though some other Bose models have the feature). I often just took them off outdoors for safety purposes.

Verdict: The AirPods Pro became my go-to earphones for running errands like going out to the grocery store and walking my dogs. A bonus: They were easier to grab on the go because of their smaller size.

After some experimentation, I learned that transparency mode was the best for taking phone conversations on the new AirPods. People’s voices sounded loud and clear in the earphones, but just as important, I was able to hear myself better, which helped me be more mindful about enunciating words and made me feel more confident over all.

Whenever I took calls on the Bose headphones, I could hear the person I was calling very clearly, but I sounded muffled to myself, which was jarring.

I also enjoyed taking calls on older AirPods, partly because they connected with my phone quickly when a call came in. But being able to hear myself better in transparency mode on the Pro model made a big difference.

Verdict: If you talk on the phone frequently, the AirPods Pro make an excellent headset.

While there are bulkier headphones on the market that do a better job at noise-canceling, the AirPods Pro are adequate in most situations, and their compact size makes them more convenient. They are a major improvement; I hesitate to recommend older versions because the new model is far superior.

Unfortunately, there’s one big thing that hasn’t changed. In my review of the previous AirPods, I noted that after about two years, my first-generation AirPods started dying because their batteries had worn out. They could not be revived because the batteries could not be replaced.

Apple confirmed the batteries could also not be replaced on the AirPods Pro. That’s because, in part, their design involves embedding the batteries, circuit boards, microphones and antennas directly into a tightly sealed, tiny package.

So if you buy the AirPods Pro, be warned: You will most likely have to pay up all over again in two years.