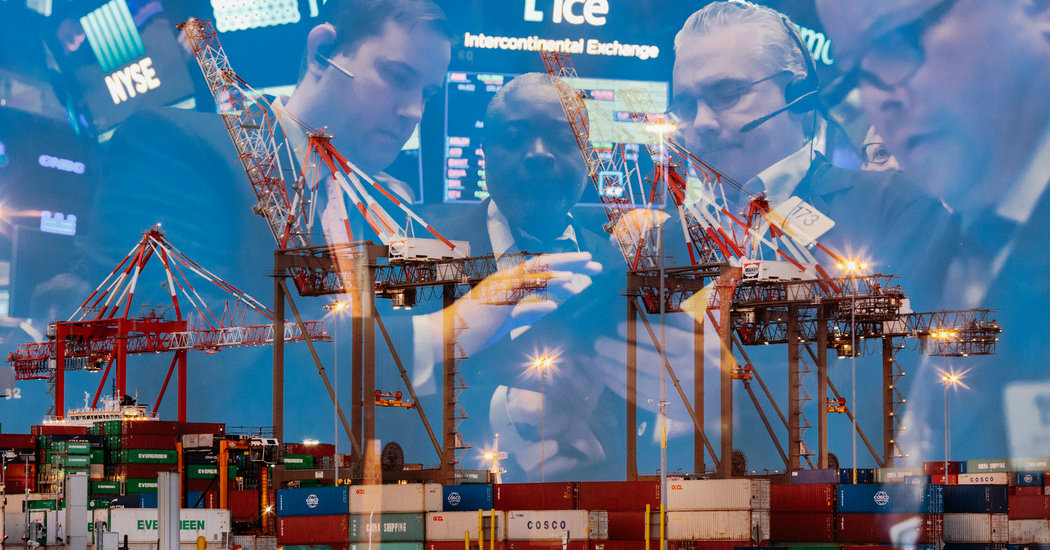 Catch your breath and stay hydrated, stock market investors. It’s only halftime, and the second half of 2020 could go either way.

During the first six months of the year, stocks experienced their biggest quarter-to-quarter swing in more than 80 years. First, the coronavirus pandemic and an unprecedented shutdown of the economy sent stocks on one of the fastest declines on record. Then, giant helpings of government stimulus not only stopped the sell-off but sent stocks charging to their best quarterly performance in more than two decades.

Where they go next is a mystery. There’s so much uncertainty about the coronavirus crisis that roughly 40 percent of the S&P 500, about 200 companies, have withdrawn their customary forecasts about how their businesses will perform in the months ahead, according to data from S&P Capital IQ.

The companies’ silence has unnerved analysts, who have already axed their expectations for profit growth substantially. They’re now expecting that second-quarter profits will fall more than 40 percent, according to numbers compiled by the data provider FactSet.

That’s an ugly forecast, but investors face a crucial question: Is it ugly enough?

“The numbers are sort of all over the place,” Lori Calvasina, head of U.S. equity strategy at RBC Capital Markets, said of analysts’ predictions.

For much of the second quarter, which ended on Tuesday, fear of the unknown didn’t seem to matter. The S&P 500 rose nearly 20 percent in the best calendar quarter for the broad market index since 1998.

Stocks were up nearly 45 percent at one point after the S&P 500 bottomed on March 23, and the sizzling performance made the market appear out of step with the depth of the uncertainty facing the economy and American companies.

But there is nothing Wall Street hates more than uncertainty, and lately the rally has cooled and trading has gotten rockier as investors turn their gaze to the rest of the year. Although a few bounces were mixed in, stocks slid roughly 4 percent over the last three weeks.

Without the earnings guidance they’re accustomed to, analysts and investors will have to wait for the quarterly earnings reports — which will start to arrive in bulk in the middle of July — for any sort of hard data on how the pandemic is hitting the bottom lines of major corporations.

Expectations for corporate profits are heavily reliant on the outlook for the economy, which remains very much at the mercy of the outbreak. The virus has already sunk the United States into its worst recession since the Great Depression, with roughly 20 million Americans receiving unemployment benefits.

There have been promising signs: In May, with numbers on everything from unemployment to manufacturing to retail sales showing sharp rebounds. Though they still showed the economy in a deep recession, those figures helped buttress hopes for a strong snapback in activity premised on rising hopes that the virus could be contained.

But that premise has crumbled over the past few weeks. Officials have reported sharp upticks in cases in many states, especially in areas of the South and West that were largely untouched when the virus first flared in the United States in March.

Those new outbreaks have prompted a number of states to pause — and some, like Texas and Florida, to roll back — efforts to normalize economic activity.

Stock market optimists suggested that the rally was in many ways a reflection of investor expectations that the pandemic — which had peaked in early hot spots such as New York City in April and May — was beginning to abate, clearing a path to restart the upward march of share prices seen during the preceding bull market, which lasted more than a decade.

There’s another source of unease: what policymakers will do as the pandemic persists.

Some explain the surge in stocks largely as a result of the huge amount of fiscal and monetary stimulus the federal government threw at consumers and financial markets as the virus started to freeze up much of the economy.

The Federal Reserve months ago signaled its willingness to do pretty much anything necessary to keep markets functioning smoothly and provide support for the economy. The central bank pumped more than $2 trillion into the financial system, largely by buying government-backed bonds, but it has also started buying relatively small amounts of corporate bonds. Analysts remain confident that the Fed will continue providing such support for the foreseeable future.

But they’re less sure what to expect from Congress and the Trump administration.

In March, the $2 trillion CARES Act became the biggest economic rescue package the government has assembled in modern history. That legislation sent stimulus payments to more than 100 million Americans, distributed hundreds of billions in forgivable loans to help small businesses pay idled workers and increased unemployment payments to those who lost their jobs.

The depths of the crisis made it relatively easy for politicians from both parties to forge a deal that would keep the economy from disintegrating. But those programs have already started to expire — the Paycheck Protection Program is scheduled to take its last applications from small businesses on Tuesday.

Democratic and Republican lawmakers agree that more aid is necessary, but they have yet to find common ground on a number of issues. Republicans are reluctant to extend costly jobless benefits and have said increasing liability protections for businesses and schools is a priority. Democrats are calling for hundreds of billions of dollars in state and local aid and an extension of unemployment benefits.

Jonathan Golub, chief U.S. equity strategist at Credit Suisse, said investors appeared to be nearly certain that additional fiscal stimulus would be coming out of Congress, but that any significant delays could add to the market’s jitters.

“How they get extended is going to be extremely important,” he said.