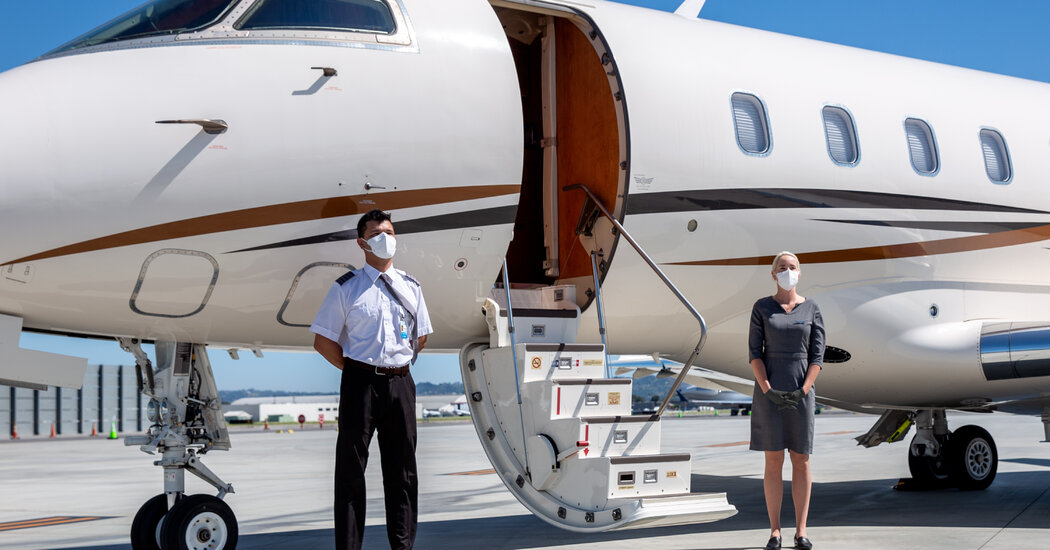 Lexi Shangraw, a San Francisco resident, flew to Phoenix in early March for what was supposed to be a brief visit. But when lockdowns started, she ended up staying longer than anticipated in hopes of waiting out Covid-19.

Last month, she decided it was finally time to return home. Dubious about the safety of big commercial airlines, she chose JSX, a hybrid private jet service that departs from small, private terminals. In the world of private jet travel, Ms. Shangraw got a good deal. Her one-way ticket on a semiprivate jet to Oakland, Calif., cost $159. That same day, a flight to the Bay Area on American Airlines would have cost $150, she said.

Ms. Shangraw is among the growing number of Americans using private jets, seeing them as a safer alternative to the often cramped commercial flights filled with strangers during the pandemic. The day after the Fourth of July, when commercial airline travel was down 74 percent year-over-year, private jet flights were up five percent, according to an analysis of data from Argus, an aviation consulting firm, by Doug Gollan, who runs the website Private Jet Card Comparisons.

On JSX, passengers still fly with up to 29 strangers (though Ms. Shangraw said there were fewer than 15 on her flight), but there’s no need to arrive two hours early (the company recommends 20 minutes), because there are no security lines and no complex boarding procedures. JSX flights tend to cost between $300 and $500 one way, per person, but some shorter legs can cost less than $100.

The price of exclusivity

Compared to most private jet services, JSX is downright affordable. Some customers are opting for pricey, custom charter flights that can cost anywhere from a few thousand dollars to more than $10,000 per hour, based on factors like aircraft type and in-flight service.

Even when paying top dollar, many travelers are seeing value in springing for private flights amid a pandemic. That includes people like Franklin Antoian, the founder of the personal training website iBodyFit, who — along with his wife and two kids — took his first-ever private jet ride last month from Palm Beach, Fla., to visit family in upstate New York. It cost $20,000, about six times more than Mr. Antoian’s usual first-class fares for his family of four. He justified the cost, saying this may be his family’s only flight this year.

A town car arrived at their home and shuttled them directly to the door of a small airport with plush chairs and no blaring loudspeakers. The plane left when the family was ready.

It’s a far cry from ever-changing rules about middle seats, passengers refusing to wear masks and flight attendants telling off passengers for sitting in an unoccupied exit row for more space. And while travelers on commercial airlines report confusion over mask policies not being enforced, flying private means everyone has their face covered.

“I’d always wanted to fly on a private jet, and then I started thinking about what travel might otherwise be like on a commercial airline,” Mr. Antoian said. “I didn’t want to wait in a crowded terminal. I didn’t want the chance that someone on the plane might complain about wearing a mask and the plane might be delayed.”

“Flying private is much safer, and consistently so,” said Sridhar Tayur, founder of OrganJet, a company that provides private jet travel for organ-transplant patients. “Social distancing is easier. The pilots wear masks. The passengers — usually a small number — know each other.”

The major drawback for many travelers is, of course, the cost. A one-way charter flight between New York and Miami with the private jet company Silver Air costs between $15,000 and $20,000 for the entire aircraft, depending on the jet (their planes seat between four and 10). Bring nine friends, and that still amounts to a few thousand dollars per person each way — significantly more than the cost of your average first-class ticket, and far more than the price of a basic economy seat. Another company, Jet It, charges $4,200 per hour (though purchasing a membership reduces the per-hour rate to $1,600), not including airport fees. Their HondaJet Elite aircraft seats six.

To reduce the price of the $8,000-to-$10,000-per-hour flight, Jamie Gibson, the founder of the website Flightess and a high-end charter flight attendant, says more groups of first-time fliers are chartering planes with friends and family, and thus reducing the per-person cost. Prepandemic, her regular clients were executives who tended to travel alone. The cost is further reduced by the CARES Act tax break. Private jet customers aren’t required to pay the 7.5 percent Federal Excise Tax between March 28 and Dec. 31, 2020, which is typically charged on all private jet flights and hours. Additionally, companies don’t have to pay any fuel taxes during that period, which is one less cost they would otherwise pass onto consumers.

While commercial air travel is getting pummeled, private jet travel has not been hit nearly as hard, said Mr. Gollan.

“With virtually no business travel, the rebound was fueled by existing customers flying for personal reasons and newcomers to the market,” Mr. Gollan said. “Private flying isn’t fully back, but certainly the industry is in much better shape than airlines. There is a strong flow of new-to-private-aviation customers.”

XO, which offers both private charters and the ability to book individual seats on private jets, saw a 19.8 percent decrease in hours flown in the first half of 2020 versus the first half of 2019, according to Argus data. But the company said monthly membership sales between March and May 2020 among first-time private jet fliers averaged five times higher than their monthly averages.

Two other companies have also seen increased interest. Sentient Jet said more than 50 percent of the 8,000 flight hours in June were sold to first-time customers, up from about 25 to 30 percent in most months. And Air Charter Service said in a press release that in May and June, it saw a 75 percent increase in year-over-year inquiries from potential customers.

The trend looks likely to continue as commercial air travel may only become more painful. JetBlue is blocking middle seats through at least Sept. 8 and Southwest Airlines is doing the same through at least Oct. 31 — but it’s unclear what happens after that. Luxuries like airport lounges are closed with no indication when they’ll reopen. And passengers report flights being canceled at the last minute.

Who is flying private

Ms. Gibson said in addition to families and friends on vacation, she’s recently flown students who needed to return from college or boarding schools and older passengers who feel especially at risk flying commercial airlines. And as airlines cut back on international flights in response to countries closing their borders to some foreigners, including Americans, she’s also flying a number of repatriation trips.

Private jet travel allows citizens of other countries to find a way home. For repatriation flights from the United States to a country where travel is restricted to citizens only, the plane can land, but Ms. Gibson and her crewmates can’t set foot on foreign land. The passenger departs, and the crew immediately leaves the country. It is not advised to use a private jet to skirt entry restrictions — just look at the five American travelers who chartered a private jet to Sardinia, but were turned away upon arrival.

Even dogs are flying on chartered planes. Elsa Chen, a Bernedoodle puppy, was purchased by her owners through a website called PuppySpot. They paid the company’s standard flat rate of $799 to send dogs via air cargo. But when Elsa’s American Airlines flight from Chicago O’Hare to San Francisco was canceled last month and could not be rebooked for several days, PuppySpot rebooked Elsa on a private jet and had her arrive in San Francisco nearly on schedule. As a result, PuppySpot is now flying all of its dogs on private planes.

These days, most passengers’ biggest safety concerns center on Covid-19. Ms. Gibson and her crewmates now wear a mask and gloves throughout the flight, but she said some customers still opt out of most in-flight service as a precaution. About 15 percent of her clients now prefer plastic plates in lieu of fine porcelain china to minimize risk, and about the same number ask to be mostly left alone in the cabin to maintain distancing.

JSX said they’ve always wiped down high-touch areas like seats, armrests and tray tables at the start and end of each day. Since the Covid-19 pandemic, they’ve ramped up cleaning to occur “throughout the day” with hospital-grade disinfectant.

With most of the modern stresses of commercial travel absent, Mr. Antoian said his private jet experience harkened back to the 1950s era of “the Golden Age of plane travel,” a time when flying felt glamorous.

“You’re not just offering coffee or tea,” Ms. Gibson said. “You’re offering a cappuccino or espresso. You’re not just handing them a bag of cookies or peanuts. I offer to bake them a souffle. Any custom food requests, we can order or make.”

Mr. Antoian didn’t ask for any custom orders (his kids ate sandwiches from home) — but it wasn’t out of any coronavirus-related caution.

“I just didn’t want to inconvenience anyone,” he said. Even without a souffle, Mr. Antoian said the experience was well worth it for (most of) his family.

“He knows how to work the Delta TV and how to navigate the Disney movies,” he said. “He had to watch it on my wife’s iPad. He was disappointed.”