Several years ago, Adobe Systems (NASDAQ: ADBE) made the difficult decision to switch from a product sales model, under which it sold its software on CDs in cellophane-covered boxes, to a cloud-based subscription model. The creator of popular image- and video-editing software like Photoshop, Illustrator, and Premiere Pro is also known for its ubiquitous PDF document management tool.

Skeptics at the time worried that the move would alienate its core users, 50,000 of whom signed a petition at Change.org in an effort to get the company to reconsider the move. Initially, it appeared the naysayers were right: Adobe’s revenue declined 8% in 2013. In the years since, however, those fears have proved to be baseless.

Adobe produced record results in 2017 , and ahead of its earnings release for the first quarter of its fiscal 2018, shareholders were hoping to see it continue its winning streak. They were not disappointed. 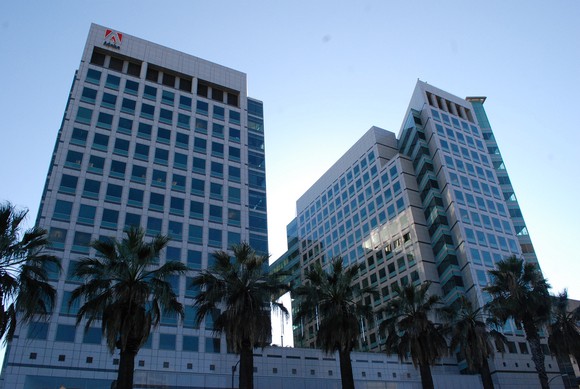 Adobe’s move to the the cloud is paying off. Image source: Adobe.

For the quarter, which ended March 2, Adobe reported record revenue of $2.08 billion, up 24% year over year, and adjusted earnings per share of $1.55, which was 65% higher than the prior-year quarter. These were both ahead of analysts’ consensus estimates of $2.05 billion and $1.44, respectively.

These results were driven by a 30% increase in subscription revenue, as more customers signed up for Adobe’s single-app option, though the company is encouraging existing users to upgrade. Evidence of its success on that front can be found in its increased average revenue per user.

Revenue from digital media grew to $1.46 billion, with sales from Creative Cloud cresting at $1.23 billion and those from Document Cloud achieving $231 million. These resulted in annualized recurring revenue of $5.72 billion at the end of the quarter, up $336 million.

Impressive results no matter where you look

Adobe hit a new milestone in the quarter, with a record 88% of revenue coming from recurring sources. The company also achieved record cash flow from operations of $990 million, and increased its average revenue per user across all product categories, as users tended to upgrade from using a subset of its products to subscribing to the entire suite.

What makes these results so impressive is that even as the company significantly increased its revenue, the corresponding cost of revenue and operating expenses both shrank as a percentage of that revenue, allowing Adobe to drop more of its sales to the bottom line. This shows just how scalable Adobe’s business model truly is.

The company repurchased 1.6 million shares during the quarter, at a cost of $301 million, for an average share cost of about $188 — impressive since the stock is currently trading at $225. Adobe also lowered its diluted share count to less than 500 million, which is down by 8% over the last decade. The company has $1.6 billion remaining on its buyback authorization.

“Adobe’s outstanding growth is driven by enabling our customers to be more creative, work smarter and transform their businesses through our relentless focus on delivering innovation and intelligence across our solutions,” said President and CEO Shantanu Narayen.

Adobe is expecting its stellar growth rates to continue. For the coming quarter, management is forecasting total revenue of about $2.15 billion, which would equal a 21% increase from the same period last year. The company expects adjusted earnings per share of $1.53, an increase of 50% year over year, with GAAP earnings of $1.16, an increase of 55% over the prior-year quarter.

Any doubts about the wisdom of Adobe’s decision to move to the cloud have long since been put to rest — and investors who came along for the ride are flying high.

10 stocks we like better than Adobe Systems
When investing geniuses David and Tom Gardner have a stock tip, it can pay to listen. After all, the newsletter they have run for over a decade, Motley Fool Stock Advisor , has tripled the market.*

David and Tom just revealed what they believe are the 10 best stocks for investors to buy right now… and Adobe Systems wasn’t one of them! That’s right — they think these 10 stocks are even better buys.