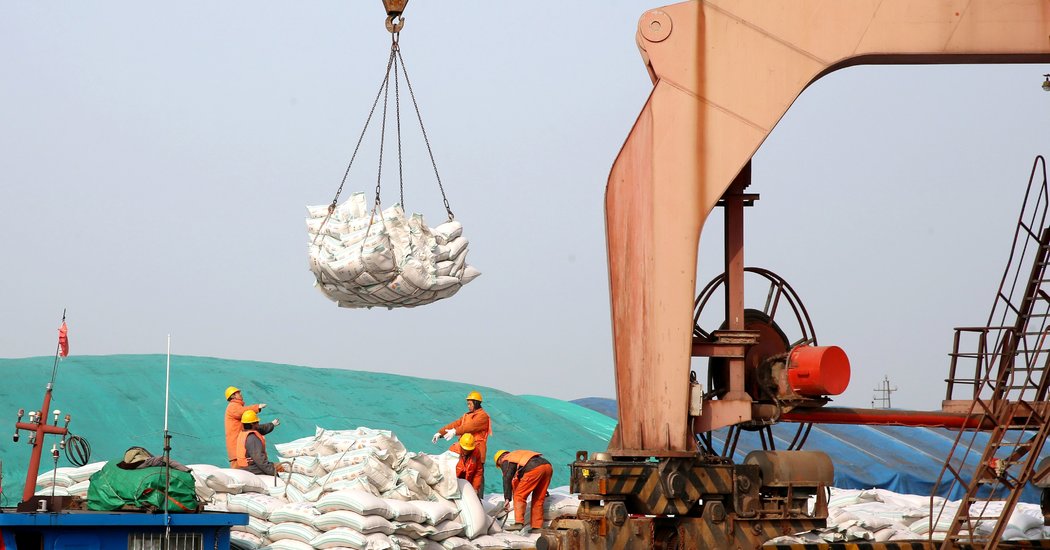 WASHINGTON — President Trump’s trade war is expected to temporarily bolster United States economic growth, in part because Beijing tried to beat the clock on Mr. Trump’s tariffs by stocking up on American soybeans, crude oil and other exports.

Economists are predicting that the gross domestic product for the second quarter could reach 5 percent when the preliminary numbers are released on July 27. The United States trade gap with China has narrowed, as more American products were shipped to Beijing ahead of the tariffs, which went into effect on July 6.

But both effects are expected to be fleeting, and the short-term economic improvement could turn into a long-term loss if both countries follow through with their threats to continue escalating tariffs against each other.

“They will dance, they will sing, they will say, look at the plunge in the trade deficit in the second quarter,” said Ian Shepherdson, chief economist for Pantheon Macroeconomics. “That is of course complete drivel.”

The United States is engaged in multiple trade wars at once as it imposes tariffs on metals from the European Union, Mexico, Canada and other nations. But it is waging an even bigger fight with China, a dispute that threatens to engulf broad swaths of the world’s two largest economies. The Trump administration has accused the Chinese of a variety of trade abuses, including intellectual property theft and denying American companies equal access to China’s market. Mr. Trump has already imposed tariffs of 25 percent on $34 billion worth of Chinese products and has threatened to hit as much as $450 billion worth of Chinese goods with levies.

On Tuesday, the administration released a list of an additional $200 billion in products that could face tariffs as soon as September. China had already responded with tariffs of its own, on soybeans, pork, automobiles and other products and signaled that its next wave of tariffs could include American oil exports.

The value of American soybean exports more than doubled in May from a year ago, Census Bureau data show, resulting from a surge in sales to the Chinese and a drop in the price of soybeans. Data on exported soybean inspections from the Agriculture Department suggests the surge continued through June, peaking the week before Mr. Trump imposed his tariffs.

The soybean surge alone is projected by Mr. Shepherdson to add 0.6 percent to America’s annualized economic growth rate for the second quarter.

Soybean farmers, and economists, say it’s hard to see anything but tariff anticipation driving the increase in soybean purchases.

“They were expecting that the tariffs would be put in place by the United States, and then they would retaliate,” said Ron Moore, an Illinois farmer who is the chairman of the American Soybean Association. “My assumption is they were trying to get as many beans as they could into storage before those tariffs went on to imports from the United States.”

Mr. Trump attempted to address soybean farmers’ concerns in a pair of tweets on Wednesday from Brussels, where he is participating in a NATO summit. He appeared to reference a 40 percent drop in soybean prices from $615 per metric ton in 2012 — a brief spike — to $368 in November 2016.

Chinese buyers have been stockpiling other products marked for tariffs as well. In May, American crude oil exports to China more than tripled from a year ago. Exports of certain auto parts, for use in vehicles manufactured in China, also surged, according to an analysis of the census data by Panjiva, a firm that tracks global trade.

America’s steel exports have also risen this year, by 4 percent from a year ago, according to Census Bureau statistics.

Economic growth has accelerated since Mr. Trump took office, and he delights in predicting that it will only grow more in the years to come. Some of his economic advisers have latched on to the projections for high second-quarter growth as a sign that administration policies, such as tax cuts, deregulation and the trade strategy, are supercharging growth.

Many forecasters predict the United States economy could approach or even reach 3 percent growth for this year but do not see it going to 4 percent or 5 percent. Indeed, they see growth slowing in the coming years, as the stimulus from Mr. Trump’s tax cuts and higher government spending fades.

Chris Rogers, the research director at Panjiva, said that “the overhang of tariffs being applied by China against U.S. exports is inevitably going to act as a drag” on growth going forward, as Chinese buyers find lower-cost suppliers, particularly for commodities.

Carl Weinberg, the chief international economist at High Frequency Economics, wrote in a research note this week that oil and petroleum products are the largest category of American exports affected by Chinese tariffs thus far, and that China will have no problem replacing them: “There is plenty of supply out there at much less than a 25 percent premium over U.S. prices,” he wrote. “U.S. producers will have to scramble to find new customers.”

Mr. Moore, the soybean farmer, said the Chinese were “pretty shrewd buyers of commodities” and that he expected purchases to fall now that the tariffs were in place. The mere anticipation of those tariffs had pushed down the cost of soybeans on the global market, costing his farm more than $100,000 for this year’s harvest, he said.

He and other members of the soybean association flew to Washington for meetings this week, and they planned to fan out on Capitol Hill, imploring lawmakers to work to stop the tariff escalation.

“This is our No. 1 topic that we’re worried about,” Mr. Moore said. “It’s even put the Farm Bill on the back burner. Because it’s so difficult for farmers to deal with, this volatility.”

Members of Congress have expressed concern over the tariffs, and on Wednesday, they took a step to warn the administration against further escalations of its trade war. A bipartisan group of 88 senators voted to approve a nonbinding resolution that would be a first move toward giving Congress veto power over future tariffs imposed for reasons of national security, such as the steel and aluminum tariffs.