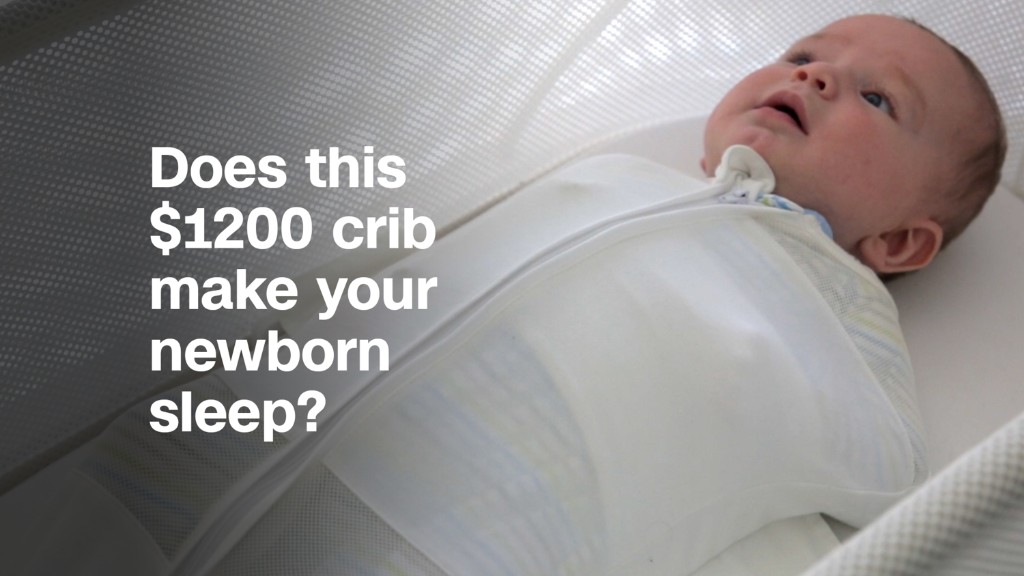 I used a robotic crib to rock my newborn to sleep.

Before you assume I’m a neglectful parent who missed out on early bonding moments with my baby, stay with me: It made me a better mother.

A high-tech bassinet, called the Snoo, kept my son — now almost six months old — soothed all night. (He’s since graduated to the crib).

The product was developed by famed pediatrician Dr. Harvey Karp, MIT engineers and Yves Behar, whose industrial design firm has worked with companies like Samsung, Prada and Kodak.

The Snoo, which took five years to develop, recreates sensations experienced in the the womb. During those first few months of life, often referred to as “the fourth trimester,” newborns are most comforted when they hear white noise, feel movement and are swaddled.

The Snoo does all three: You place the baby into a sleeper outfit securely attached in the bassinet. My husband and I referred to this as the “straight jacket” due to its lack of wiggle room. The Snoo senses when a child is fussy and moves from side to side until the baby is calm. You can set the rocking to continue through the night or turn off after eight minutes. You can also control the speed and white noise through the accompanying app.

It’s a part of a larger trend of using tech to soothe babies to sleep. For example, the Babocush cushion vibrates for colicky newborns and, in April, Ford demoed a prototype for a bassinet that mimicked a car’s motion.

Related: Letting a baby play on an iPad might lead to speech delays, study says

The Snoo ($1,200) is the brainchild of Dr. Karp, known for popularizing the concept of swaddling newborns. He’s also the author of “The Happiest Baby on the Block,” which details his well-known 5S’s approach to calming a baby.

The company calls the Snoo the safest baby bed ever made, ensuring a child will never move from his or her back. But the first time I tucked my baby in, I worried if the back-and-forth movement would be too much for his tiny size. I watched intently each night as he’d fall asleep, sometimes in less than a minute.

I began to look forward to getting him into the Snoo at night; the only place he’d sleep soundly, aside from our shoulders. In fact, at eight weeks old, the Snoo helped him sleep nine consecutive hours without waking.

When the product was announced last year, critics panned it as a cheap way to get out of bedtime soothing. For us, it simplified that process, and when the baby woke, I was more present and aware.

But the Snoo didn’t always stop the crying; if he was hungry or needed a diaper change, he’d continue to fuss. The Snoo’s role, in that case, was to take a huge puzzle piece out of the “what does he want?” equation. If he wasn’t soothed by the rocking, it was our turn to step in and figure it out.

That’s not to say the experience with the Snoo was perfect. As I became comfortable with the product — even relied on it — I found new things to worry about. When the city experienced a storm in the middle of the night, I sprinted out of bed to unplug it.

I also worried he’d become dependent on the Snoo. Although the device is intended for naptime use too, we separated church and state: He was swaddled in the crib for naps and rocked in the Snoo at night. This, I told myself, would make the transition to the crib easier.

Related: Babies may sleep longer in their own rooms, study says

The Snoo comes with three outfits — small, medium and large. Parents will quickly learn, however, that that’s not enough. After one diaper blowout, you’ll be without a Snoo-compatible sleeper. You’ll likely want to buy more at $28 each. (No one wants to do laundry at 2:00 a.m.) But considering the incredibly high price of the Snoo, multiple outfits should be included. The cream-colored outfits and sheets aren’t the best choice for hiding stains either.

The company could also provide more information on how and when to transition the baby from the bassinet to the crib.

At about three months, my son outgrew the bassinet. It was time for old-fashioned rocking and a crib surface that didn’t move.

While the cost is the Snoo’s biggest downside — Karp says he’s exploring ways to lower it in the future — I’m indebted to those extra hours of sleep.