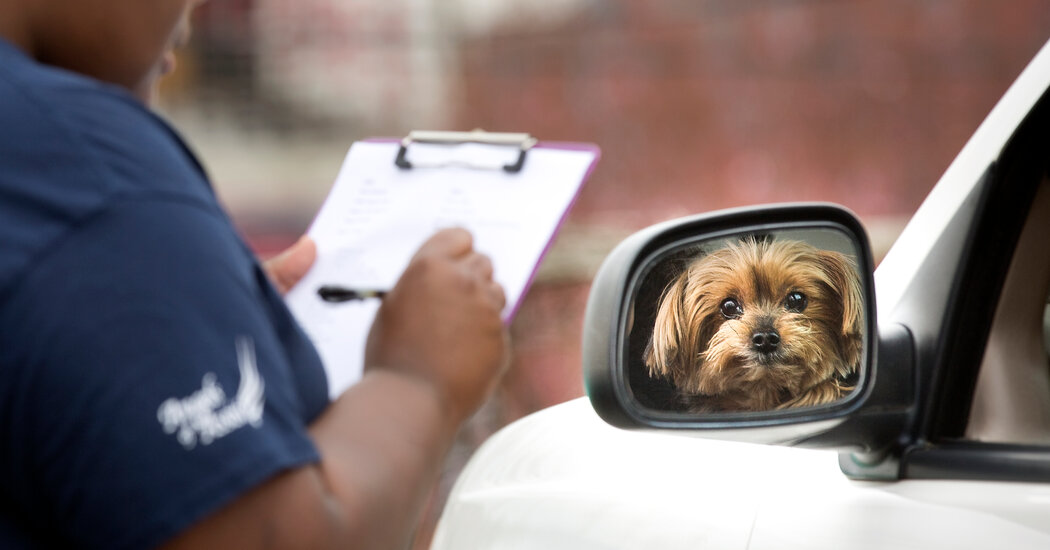 The human health care system has struggled financially through the coronavirus pandemic, losing billions from the cancellations of lucrative elective operations as patients were first told to stay away from hospitals and then were leery of setting foot in one.

The canine and feline health system, though, is booming.

While hospitals were furloughing workers, Dr. Vahrenwald added five employees, and still has job listings for more. Her clinic has had to buy two phone lines to handle a deluge of calls from pet owners.

“The phone lines were so busy that, if we were occupying them making calls out to clients, we would end up with 60 voice mail messages in a half-hour,” she said.

Animal hospitals appear to have pulled off something human hospitals have struggled to do: make patients feel comfortable seeking routine care.

Most veterinarians are now requiring curbside service — owners drop their pet at the door, and wait outside during the appointment — lessening the risk of catching coronavirus.

Their animal patients tend to be less susceptible to coronavirus, although not completely immune. Some pets have become infected, and last month the first dog in the United States to test positive for the virus died.

Pet owners have, collectively, decided there is enough value in maintaining the health of their cats and dogs to brave the outside world at least a little more. Much of the increase in veterinary care seems to be for wellness visits and vaccinations. By contrast, primary care spending for humans is estimated to have dropped by $15 billion over the course of the pandemic.

The veterinary industry provides something else important that the human health system doesn’t: transparent prices. Veterinarians can typically provide reliable price estimates, in part because they have standard charges that don’t vary by type of insurance.

Patients may be reluctant to return to the human health system in part because they’ve lost coverage, or have less income, and are worried about the possibility of a surprise bill.

Demand for veterinary services is typically cyclical: Pet owners spend more on medical care for dogs and cats when the economy is strong and they have more disposable income.

This economic downturn is different. Volume and revenue are up at animal hospitals and primary care offices. VetSuccess, which tracks financial data from 2,800 clinics, estimates that revenue last month was up 18 percent over last July.

Trupanion, a pet health insurer, announced in an earnings call this week that its second-quarter revenue was up 28 percent over last year. It has 14 percent more cat and dog members than it did at the start of the year (at a moment when 5.4 million American humans are estimated to have lost coverage). Some of those newly insured pets have names that fit the moment: Corona, Rona and Covid.

“We were impacted by the 2008 recession,” said Dr. Heather Loenser, senior veterinary officer for the American Animal Hospital Association. “In March, if you’d asked veterinarians where we thought we’d be in the summer, we would not have thought we’d have this surplus of pets and revenue.”

Veterinarians attribute the increase in demand to one key factor that makes this recession different from others: It has forced millions more Americans to work from home.

Some are taking the opportunity to bring home new pets, with some shelters reportedly emptied out thanks to high demand. The national data, however, is a bit mixed: Shelter Animals Count, which tracks adoption data from nearly 1,500 animal shelters and rescue organizations, estimates that there have been fewer pet adoptions this year, largely because of fewer strays coming into their care.

Multiple veterinarians say they are seeing more puppies than normal, to the point they can no longer take on new clients.

“We’re having to limit who we are taking on as new clients because we’ve become overrun with requests,” said Dr. Dirk Yelinek, president of the California Veterinary Medical Association, who practices at Redondo Shores Veterinary Center. “Initially we tried to offer slots a week or two weeks out. Now they’re already full.”

Americans who already had pets seem to have become more watchful of their animal companions during the long pandemic days at home together. Sometimes they notice important changes in the health of their cats and dogs. One emergency veterinarian reported a rise in cases of urinary obstructions among cats, which may be a sign of feline stress (possibly a result of humans hanging around more than the cat would like).

Other times veterinarians may see a case of, as Dr. Loenser describes it, “staring at your pet” syndrome: subtle differences that don’t require medical care but catch the attention of a quarantined pet owner.

“It’s been really surprising, like what the heck? Why are we all so swamped?” said Dr. Monica Mansfield, a veterinarian in Medway, Mass. “In general, I’m wondering if this might be related to an uptick in anxiety and people wanting to take care of health issues they can control.”

The wave of demand comes even as the work of providing veterinary care is taking longer, straining clinics’ resources. Veterinarians say curbside visits require more time, as they play phone tag with owners and have to develop new intake processes.

“We found it impossible to keep up with curbside care with our normal time slots,” Dr. Mansfield said. “If it was usually a 15-minute appointment, we’re now blocking out 30 minutes. That’s one reason our bookings are now bumped out a couple of weeks.”

Some veterinarians say they are also seeing slightly sicker dogs, which may be a result of owners putting off care at the beginning of the pandemic. A few serious conditions may also be on the rise: BluePearl, which operates 90 pet hospitals across the country, has seen a 70 percent increase in hospitalizations for parvovirus, a potentially deadly ailment that most commonly strikes unvaccinated puppies.

“We think owners earlier in the pandemic maybe didn’t want to go out and see a veterinarian or maybe couldn’t afford to,” said Dr. James Barr, BluePearl’s chief medical officer. “We think that probably resulted in fewer dogs getting vaccinated.”

Veterinarians operating at or over capacity have put a strain on the animal emergency rooms, which typically are open 24 hours and now appear to be handling the overflow from overwhelmed clinics.

“When I take a call in our emergency room, owners are saying we’re often the third veterinary practice they’ve called trying to get an appointment,” said Dr. Armelle de Laforcade, an associate professor of clinical sciences at Tufts University’s Cummings School of Veterinary Medicine.

Dr. de Laforcade practices emergency and critical care medicine at the university’s animal hospitals, which used to be able to see all patients turning up for appointments. Since the start of the pandemic, the hospitals have sometimes had to go on “diversion,” telling owners that they’re too full to accept more patients and directing them to clinics nearby.

“Several times a week we’re having to say: Our case load is extremely high and we need to divert for a little while,” Dr. de Laforcade said. “It’s more common than we would like.”

Like other clinics, Tufts has had to hire new employees just to pick up the phone. It’s part of adjusting to the new normal of operating in a pandemic and, as a veterinary teaching hospital, training the next generation of veterinarians at the same time.

“We’ve invested in cameras where you can watch operations when you’re not in the room,” Dr. de Laforcade said. “We’ve had to find a way to creatively deliver clinical education remotely.”