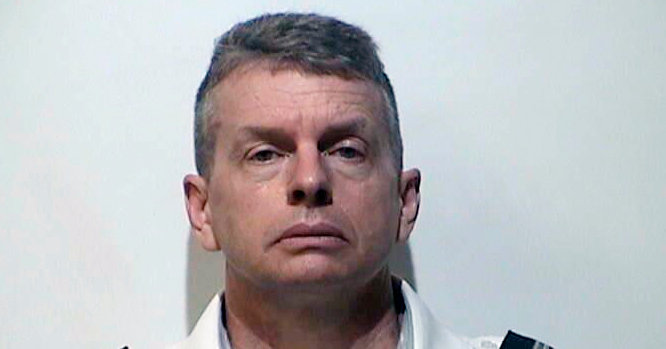 A pilot for American Airlines was at Louisville International Airport in Kentucky on Saturday morning when the authorities arrested him in a triple-murder case.

The pilot, Christian Richard Martin, 51, had been indicted the day before in a case involving three people who were found brutally murdered in Pembroke, Ky., in November 2015.

The victims had been neighbors of Mr. Martin. Two of them, Calvin and Pamela Phillips, were married. The other victim, Edward Dansereau, was found in a burned-up car in the middle of a cornfield with Ms. Phillips. Mr. Phillips was found fatally shot at his home.

A grand jury in Christian County, Ky., indicted Mr. Martin on Friday on charges of murder, arson, attempted arson, burglary and tampering with evidence. He is being held without bail.

Mr. Martin has denied involvement in the three killings. His lawyer, Michael Thompson, said his client would plead not guilty at an arraignment next week and questioned why an indictment would come so long after the crime. “That’s what we’re all curious about,” he said. “What evidence do they have that they didn’t have almost four years ago?”

The arrest on Saturday was unusual in part because of its setting. Learning that a pilot had been arrested in a murder case put some passengers in the Louisville airport on edge. “I felt like it was a little chaotic and unorganized,” Ashley Martin, who had been waiting to board a flight at the time of the arrest, told WDRB, a local television station. “You could feel that energy. You could feel the tension from flight attendants.”

Mr. Martin has made headlines before, and his case has a complicated history.

In 2015, Mr. Martin, a combat veteran, was fighting his dismissal from the United States Army in a military court case that became well known among certain circles, including men’s rights groups. Mr. Phillips had been expected to serve as a witness in that case — until he was found dead.

The military case began when a woman told the authorities that Mr. Martin had mishandled classified information, according to past and present lawyers for Mr. Martin. He has said that he thought the woman was his wife until he learned she was already married to someone else, and that she had also had an affair with Mr. Phillips.

The accusations against Mr. Martin eventually led to his dismissal from the Army, where he had served as an aviation pilot with a rank of major. (A dismissal is like a dishonorable discharge, but for officers.) He fought that dismissal, even as the case grew to include charges that he had sexually assaulted a child.

He was found not guilty on that count during a court-martial in 2016, but he was convicted of the lesser charges against him: mishandling classified information — some documents on his laptop that had to do with his service in Iraq — and simple assault. He was sentenced to 90 days in prison, said his lawyer at the time, James Phillips.

The military case drew attention even before the 2015 killings. “It was one of the most heated trials I’ve ever been in, in the military,” said Mr. Phillips, who is not related to the murder victims. “Then when the triple homicide occurred, it took on a whole other dimension.”

The case caught fire among men’s rights groups like the National Coalition for Men, which in 2016 published an article with Mr. Martin’s byline. It said he was writing from a correctional facility in Kansas. “U.S. veteran men are now the new political prisoners of the world, the real expendables,” it said. “After years of putting their lives on the line for their country, and sacrificing irreplaceable family time, their country is now railroading them into prison.”

Several organizations devoted to men’s rights published material in defense of Mr. Martin. “Lots of these men’s groups got involved and were trying to help him out,” Mr. Thompson, Mr. Martin’s current lawyer, said.

At some point after he served his sentence, Mr. Martin moved to North Carolina. In the meantime, relatives of the three people who were killed continued to search for answers.

Andy Beshear, Kentucky’s attorney general, said in a video statement on Saturday that his office had picked up the case after a son of the married couple made a personal plea.

“About two years ago, Matt Phillips came into my office,” Mr. Beshear said. “He talked about losing both of his parents in a brutal murder that also took the life of a third individual. He was worried that the case was stalled, and was worried that justice would not come.”

Matt Phillips could not be reached for comment on Monday evening. But he told CNN that his father had had evidence that was harmful to Mr. Martin’s case in military court. “He was shamefully kicked out of the military,” he added, referring to Mr. Martin. “My father had a lot to do with that. And I think we should all be thankful for that, frankly.”

Mr. Thompson said that Calvin Phillips’s testimony would have helped Mr. Martin, and that he had been expected to be a witness for both the defense and the prosecution at the court-martial. “There’s no motive,” he said. “That’s the wrong information out there.”

Mr. Martin, who has worked for a subsidiary of American Airlines since January 2018, has been suspended. According to the carrier, pilots undergo a criminal-background check and are then vetted on a recurring basis; the vetting of Mr. Martin had not turned up criminal history that would disqualify him from becoming a commercial pilot.

“We have an unwavering commitment to the safety and security of our customers and team members,” the airline said in a statement.