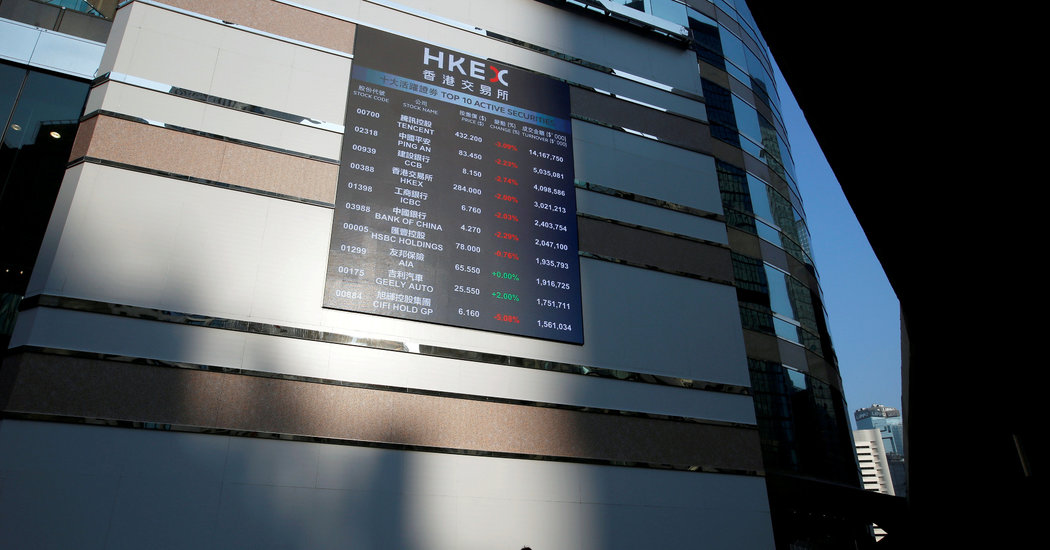 LONDON — Stock exchanges are potent national symbols of capitalistic clout, and a surprise offer on Wednesday by Hong Kong’s exchange to acquire its London competitor is likely to set off a transcontinental tug of war.

If it came to fruition, the Hong Kong Stock Exchange’s unsolicited $36.6 billion bid for the London Stock Exchange would create a market juggernaut, pairing the pre-eminent exchanges in Europe and Asia and creating an emboldened rival to challenge the leading United States exchanges.

Hong Kong officials said on Wednesday that fusing the two exchanges would allow companies and investors to profit from a common platform for trading stocks and bonds that would be open 18 hours a day.

But the proposed deal comes at a time of wrenching economic, political and social turmoil in Britain and Hong Kong that is jeopardizing their standings as regional financial hubs.

In Hong Kong, China’s efforts to assert control over the semiautonomous territory have provoked weeks of angry protests. And in Britain, the government is in turmoil over plans to exit the European Union in a way that could deflate the economy.

The Hong Kong offer would require Britain to cede a corporate crown jewel — one whose roots trace back to 1571 — at a time when London’s centuries-long status as a leading financial capital is already in doubt because of Brexit.

Britain has been more open to investment from China and Hong Kong than other Western countries have. Li Ka-shing, the Hong Kong tycoon, has invested in British infrastructure for years, and London has been slow to bend to Washington’s pressure not to use equipment from Huawei, the Chinese maker of telecom gear. But the Hong Kong protests have brought questions of Chinese influence to the fore.

The Chinese government is the largest shareholder of the Hong Kong exchange, with the right to name six of its 13 board members, and Beijing’s responses to the antigovernment demonstrations in Hong Kong are likely to lead British officials to closely scrutinize the deal for any signs of Chinese government influence. Britain’s business minister, Andrea Leadsom, said in a Bloomberg Television interview on Wednesday that regulators would “look very carefully at anything that had security implications for the U.K.”

Previous foreign takeovers of British companies have been derailed or delayed on similar grounds, such as a proposed takeover last year of Northern Aerospace by a Chinese rival. The British government announced plans last year to significantly toughen its scrutiny of foreign takeovers, with a particular eye on those coming from China.

Hong Kong’s proposed takeover is the latest piece of a decade-long rush toward consolidation of stock exchanges around the world, as they try to fend off both upstart competitors and new technology that threatens traditional market exchanges with obsolescence.

Both the Hong Kong and the London exchanges have sought merger partners. They and others are crossing borders to better appeal to companies that no longer necessarily see one country as their home. American executives, for example, regularly travel to Asia to try to persuade fast-growing private companies to list their shares in the United States, rather than Hong Kong or Tokyo.

Stock exchanges have been transformed as a result. In the United States, both the New York Stock Exchange and the Nasdaq Stock Market are now part of broader, more global companies.

The London Stock Exchange Group in particular has been the object of desire for other exchanges: Deutsche Börse and the Toronto Stock Exchange have both tried and failed at takeovers in the past decade.

Trying to bolster its standing as an independent company, the London exchange last month agreed to buy the data provider Refinitiv for $27 billion. That pending deal makes the Hong Kong bid even more of a long shot because it would make the London Stock Exchange bigger than its Asian rival.

The Hong Kong company’s takeover interest caught the management of the London Stock Exchange by surprise.

Executives at the two exchanges met on Monday in what British executives figured would be a casual discussion about the state of their industry, according to people with knowledge of the matter.

Instead, the Hong Kong officials declared that they wanted to buy the London exchange for nearly $37 billion.

Less than 48 hours later, the Hong Kong company made its offer public, hoping to cause a swell of support for the deal from the London Stock Exchange’s shareholders.

Under the terms of the offer, the Hong Kong company would pay cash and stock worth about 8,361 pence per share as of Sept. 10’s stock prices, a 23 percent premium to where the London exchange’s company had been trading.

British takeover rules now say that the Hong Kong exchange has 28 days to either make a firm acquisition offer for the London Stock Exchange or walk away.

For now, it is unclear what will happen. Shares in the London Stock Exchange Group rose 6.6 percent on Wednesday, to 7,254 pence. That remains below the Hong Kong exchange’s offer, suggesting skepticism from the London company’s shareholders that a deal will come to pass.

The London exchange said in a statement that it would consider the unsolicited offer from its Hong Kong counterpart but remained committed to completing its $27 billion deal to buy Refinitiv. That transaction would thrust the London exchange deeper into the business of selling and managing market data, a business that has grown in prominence and profitability for exchanges.

But proponents of the Hong Kong offer are likely to argue that becoming part of a European-Asian giant is a surer business bet than buying Refinitiv, which has long lagged Bloomberg L.P. in the market data industry.

Charles Li, the chief executive of the Hong Kong exchange’s parent company, said on a conference call with the media on Wednesday that the Refinitiv transaction helped push his company to hastily move forward with a bid. “We know we were late,” he said. “We don’t want to be late again.”

The offer comes at a politically turbulent time for both exchanges’ home bases. The British government remains paralyzed by questions about how the country should leave the European Union, while the business community remains in the dark about what Brexit would mean for London’s place on the business world stage.

At the same time, Hong Kong has been torn by mass demonstrations over what protesters see as a more assertive hand by Beijing in what is meant to be a semiautonomous region of China, operating under its own laws, which international businesses and investors find attractive compared with conditions on the mainland.

On Wednesday, Mr. Li rejected the idea that the Hong Kong exchange would want to loosen its ties to the mainland. He noted London’s ambition to become a global center for trading in the renminbi, the Chinese currency, and said the Hong Kong exchange could help fulfill that. Beijing heavily restricts the currency from crossing its borders, but some Chinese officials have openly discussed a day when the world might use the renminbi as commonly as it uses the American dollar, which would give China greater say in the global financial system. Should London become a hub for renminbi use, more Chinese companies and investors would consider the city an even more attractive place to do business.

Mr. Li dismissed concerns about a China-owned company buying a British icon. He noted that Hong Kong Exchanges and Clearing has owned the London Metal Exchange for seven years, investing in the British platform and keeping it free from Chinese management.

“We are not a Chinese company, and we are not even a simple Hong Kong company,” Mr. Li said. “We are a global company.”