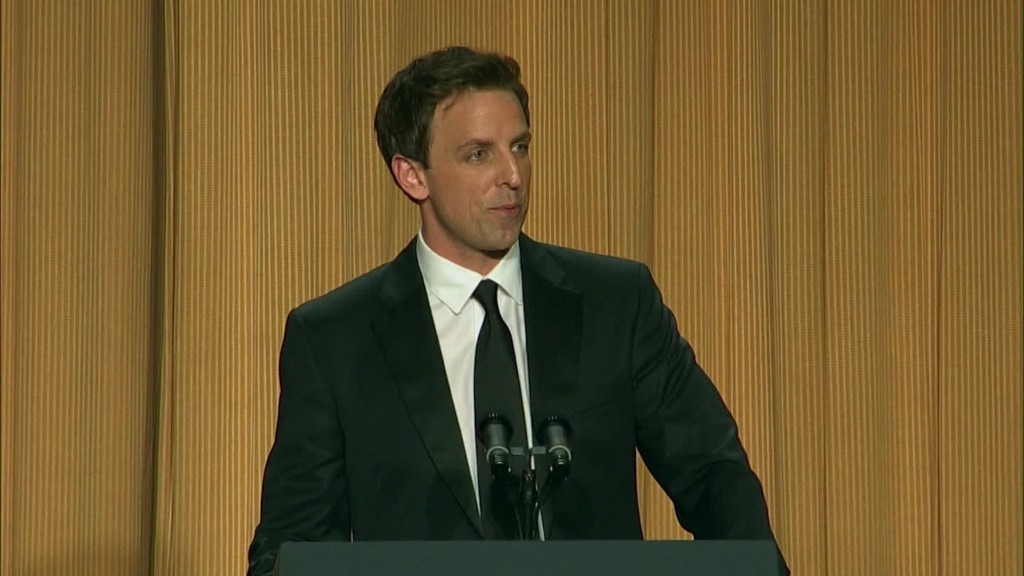 The current late night era can be split into two parts: before Donald Trump and after. But for Seth Meyers, Trump has always been a “looming cloud” over the “Late Night” host.

Meyers told CNN recently that Trump has been “a part of my life since that night in 2011” when he famously roasted the then-host of “Celebrity Apprentice” at the White House Correspondents Dinner. Some in the media bill that night as the moment Trump realized his presidential ambitions.

Meyers has taken his lampooning back to 30 Rock since Trump took over the Oval Office. And like his cohorts in late night television, the comedian has seen his profile rise thanks in large part to his nightly jokes about the commander-in-chief.

At his “Late Night” studio earlier this week, Meyers talked to CNN about that fateful night in 2011, how he reworks his show for breaking news and the one person in the White House he wants on his show (it’s not Trump). The conversation has been edited for length and clarity.

When you hosted the 2011 Correspondents Dinner, you made a joke that some would say spurred on Trump to run for president. How do you feel about that joke now?

I want to make it very clear, I still very much enjoyed that evening and I do recollect it very fondly. It’s weird that people have made that case that was what spurred him to run, but I’ve always made it clear that I would be more angry had I said less about him as opposed to having any regrets about anything I said joke wise.

You famously “banned” Trump from the show. Let’s say one day Trump feels like coming on. What’s your first question?

Why did you think this job would be easy? Because when he complains about how it’s harder than he thought it would be that is striking to me, because no one who ever did it said it was easy. And that would be where I would open.

Is there anything about your life that you miss before the age of Trump?

Well, I feel like Donald Trump has been a part of my life since that night in 2011. You know, I end up getting asked about him a lot and so he’s always sort of been a shadow, a looming cloud. So, yeah no, I don’t. I’m very lucky to say that.

Lately news has been breaking while you’re taping. How do you rework the show when that happens?

Well, we have a lot of people who now are sort of tasked with watching things as they happen. We might be sitting here right now as a Congressional testimony is going on and that is something that people will be watching and making sure that if something happens they can pull those tapes and build those graphics and we can fold it into the show before the actual taping.

You know there are times where it just happens too late and we try to make a brief mention of it and knowing that it’s better for us to actually give ourselves 24 hours and make sure we get it right, as opposed to sort of rushing to judgment for the purposes of being fresh.

A lot of people don’t trust the media right now. Is there a place for comedians and late night hosts to fill that void?

I still think I would trust a journalist over a comedian, and I think we’d be at a better place in a society if that was the case. With that said, I think comedians are very well equipped to deal with the Trump administration because they’ve sort of eroded all of the sort of values of communication that we were used to for presidents, so journalists are sort of at a loss sometimes to call it what it is. Comedians are in a much better place to do that.

So, I guess we can call a lie a lie a lot faster than journalists do and that is an advantage these days.

Coincidentally, you were one of the first people to talk to Kellyanne Conway after the CNN report that Trump was briefed about claims that Russia potentially had compromising information on him. In that moment, were you a journalist or a comedian?

I was a comedian and here’s how I know I was a comedian, I was reading the work of journalists before I went out. I had a CNN print out of that story. I made sure I understood the details of it, in a way that I could form a coherent question, because obviously it wasn’t my expertise. So, in that regard I was basically just a vessel for journalism.

Who is your dream political guest?

I’ve been saying this a lot lately, because it’s genuinely the truth, I am so fascinated by Sean Spicer’s day. I have so much to ask him about it. I desperately want to know how white-knuckle the last 15 minutes is for him before he goes to that podium and that something might happen that he will not, at that point, have any time to have prepared an answer to.

People keep saying to me, “Is it crazy how late news breaks for you?” Sure, but we can always just decide to skip it. He has a job where he can not skip any of the crazy things that happen last minute and I really am fascinated by that.