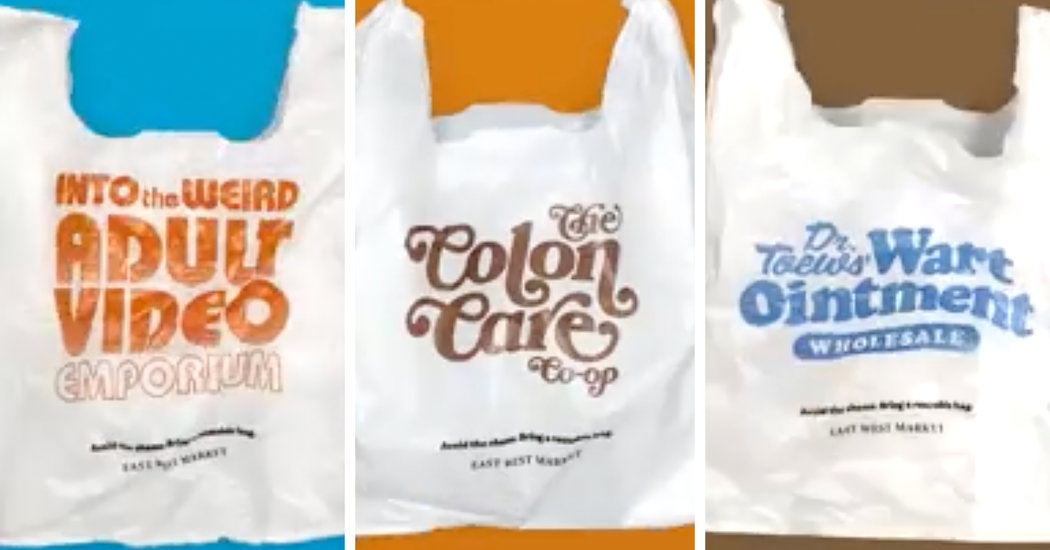 A Canadian store’s attempt to help the environment and gently shame its customers into avoiding plastic bags by printing embarrassing messages on them has not gone quite as planned.

Far from spurring customers to bring their own reusables, the plastic bags — variously emblazoned with “Dr. Toews’ Wart Ointment Wholesale,” “Into the Weird Adult Video Emporium” or “The Colon Care Co-Op” — have become somewhat of a surprise hit.

“Some of the customers want to collect them because they love the idea of it,” David Lee Kwen, the owner of the store, Vancouver’s East West Market, told The Guardian newspaper.

The store began the campaign this month, printing up 1,000 bags with the eye-popping slogans. Shoppers who chose to use a plastic carrier would not only be charged 5 cents apiece, they would theoretically walk out onto the street with the cringe-worthy messages for all the world to see.

In smaller print, the bags revealed the true purpose of the campaign: “Avoid the shame. Bring a reusable bag.”

The grocery store’s sly campaign reflects how the nation is trying to become more environmentally friendly. On Monday, Prime Minister Justin Trudeau of Canada announced that the government would seek to eliminate single-use plastic as early as 2021, following the lead of the European Union, which last year approved a ban on 10 single-use plastics by 2021.

[Want more Canada coverage in your inbox? Sign up for the Canada Letter newsletter.]

Greenpeace Canada named shopping bags as one of the top 10 most common plastic items found on beaches and in rivers in the country, and Canada currently recycles only 11 percent of its plastic waste, according to a report published last year by Environmental Defence, a Canadian advocacy group.

More than 40 countries have banned or restricted the use of plastic bags as part of the fight to reduce plastic pollution. Kenya introduced what has been called the world’s toughest law against plastic pollution in 2017: Anyone caught producing, selling or using plastic bags faces a potential prison sentence of up to four years or a fine of up to $38,000.

Less stringent measures are in place in England, where since 2015 shoppers have been charged 5 pence (about 6 cents) for a plastic bag, but the government laid out plans to increase the fee to 10 pence next year.

Humans, too, are ingesting plastic, but on a microscopic level, according to a study released this week from Australia’s University of Newcastle and commissioned by the World Wildlife Fund. Every week, people could be consuming approximately the weight of a credit card — 5 grams, or about 2,000 tiny pieces of plastic — mainly through water containing microplastics, the research found.

Despite warnings of the health and environmental effects, not everyone seems entirely sold on the idea of reducing their use of plastic. An Australian supermarket chain last year reversed its decision to ban single-use plastic bags because of customer complaints.

Even the Vancouver store that was trying to shame its customers into shunning plastic bags uses copious amounts of plastic packaging. Recent photos of the store’s wares on Facebook show figs, mangoes, mini-cucumbers and sweet red peppers all for sale while wrapped up in plastic.

One online review of the store from 2013 noted, “They’re obsessed with sealing everything in plastic, even the lettuce.”

The review encouraged the store to change its ways. “Come on guys, be sustainable and quit using plastic if you don’t have to. It’s gross,” the reviewer wrote.

The store’s latest campaign to get customers involved drew reaction on social media, but probably not what it expected.

“I would 100 percent not use reusable bags, just to see which awesome bag I get next,” one commenter wrote on Facebook.

“Now that the entire region knows they are purposefully embarrassing, I’m even more inclined to get one. I might even buy extra bags to give to people,” a Twitter user said.

Another person denounced the campaign on Twitter, writing, “This is not a good idea, unless you want to sell more plastic bags!”

Efforts to reach the owner of East West Market on Wednesday were not immediately successful.

Although the store’s campaign went awry, Paul Foulkes-Arellano, a member of an anti-plastic pollution campaign group, A Plastic Planet, explained that the backfire was actually a “great piece of anti-plastic P.R.” because it caught the public’s attention.

“These sorts of initiatives which strike a chord with consumers and are shared millions of times have a huge effect on big businesses,” he said. “It keeps the topic being discussed in boardrooms and it spurs them on to reduce plastic from their supply chain.”

Sabine Pahl, an associate professor in psychology and member of the International Marine Litter Research Unit at the University of Plymouth, said of the store’s campaign: “The problem is that the messages are not so negative and shameful. They are quite funny, so people probably think it is quirky to carry the bags.”

Although the anti-plastic bag campaign went sideways, the Vancouver grocery store intends to keep sharing the messages on more bags, The Guardian reported. It plans to print the images on canvas bags instead.