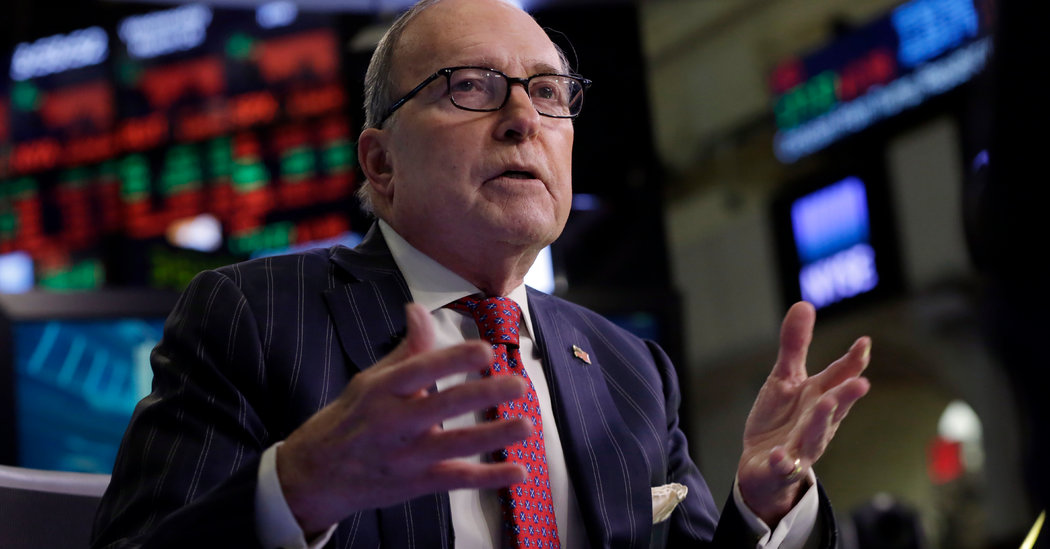 President Trump has a new chief economic adviser. Larry Kudlow, the CNBC commentator who served in President Ronald Reagan’s Office of Management and Budget, will become the director of the National Economic Council, a position left vacant after Gary D. Cohn resigned in protest to the president’s tariffs on foreign metals.

Mr. Kudlow, often on-air and with a flair for provocative punditry, has prognosticated on many economic and political issues in a way that mirrors his future boss.

His predictions, which will soon carry new weight as the president’s top economic adviser, have not always been on the mark. The following is a look back at some of his economic predictions that did not bear out.

“Homebuilders led the stock parade this week with a fantastic 11 percent gain. This is a group that hedge funds and bubbleheads love to hate. All the bond bears have been dead wrong in predicting sky-high mortgage rates. So have all the bubbleheads who expect housing-price crashes in Las Vegas or Naples, Fla., to bring down the consumer, the rest of the economy and the entire stock market.” – June, 2005

Analysis: Well, we all know what happened. By 2008, the housing bubble popped, home prices were in a free-fall and the mortgage-backed securities that banks had loaded up on were threatening to plunge those firms — and the economy — into the abyss.

Home prices in 20 metropolitan areas across the country dropped at a record rate of 18 percent in October 2008 from a year earlier as the fallout from the financial collapse reverberated through the housing market. The housing market has still not recovered completely or evenly and prices in many cities are still below their pre-recession peak.

“What’s even more incredible is Team Obama’s stubborn refusal to have any faith in the free market. In some of the hardest hit areas of the country, markets are already solving the housing problem.

If the government really wants to help, instead of bailing out irresponsible mortgage holders, it should support new and younger families who want to buy starter homes and begin to climb the ladder of prosperity.

Analysis: The Obama administration’s plan to help homeowners included a litany of programs, including reducing the debt that distressed borrowers owed. The success of these programs was mixed but recent studies show that they did, in fact, help millions of people stay in their homes.

Mr. Kudlow’s claim that the markets were already “solving” the housing problem was not accurate, given that the housing market still has not recovered in many areas, including those hardest hit.

In 2009, banks were — and in many cases remain — incredibly reluctant to make loans to all but the highest-quality borrowers. That does not generally include new and younger families, who have little credit history and are considered riskier than those with a track record of on-time payments. Without the government assisting borrowers who were in danger of foreclosure, the economic fallout from the crisis would have been even deeper, more severe and longer-lasting.

“Recessions are therapeutic. They cleanse excess from the economy. Think about excessive risk speculation, leverage, and housing. Recessions are curative: They restore balance and create the foundation for the next recovery. Despite the housing and credit problem and the sub-prime virus, banks are still lending to businesses. So we don’t have a genuine credit crunch across the board. That is very good.” – April, 2008

Analysis: Recessions do help reduce leverage — or debt — that households and businesses have since loans are no longer easy to come by and creditors demand repayment of past debts. But Mr. Kudlow’s “credit crunch” assessment was flawed. Households and businesses did face a real “credit crunch” as banks retrenched and restricted lending to all but the most sterling borrowers.

“There’s no question that President Clinton’s across-the-board tax increases on labor, capital and energy will throw a wet blanket over the recovery and depress the economy’s long-run potential to grow.” – March, 1993

Analysis: The period between 1990 and 1999 was the longest bull market in history. The S&P 500 more than tripled during that time and there was not a single bear market or dip. The so-called dot com bubble helped fuel that rise until it all came crashing down in the spring of 2000, a situation created by speculation rather than Washington’s economic policies.

“And let’s not forget: The stock market, which is a leading indicator of the future economy, is in a wee bit of a correction. Given the recent rise of presidential candidate Donald Trump, we should all be thankful that stocks haven’t plunged. Trump’s agenda of trade protectionism, dollar devaluation, and immigrant deportation is completely anti-growth. It’s like Fortress America in an economy that is completely globalized and where the U.S. must compete in the worldwide race for capital and labor. Trump’s policies don’t fit.” – August, 2015

Analysis: President Trump was elected and the stock market has only climbed. While there have been moments of volatility and days that ended in the red, the United States is still experiencing a bull market — stocks were up more than 300 percent at their peak in late January. It’s a financial metric that his new boss is quite fond of citing and taking credit for.