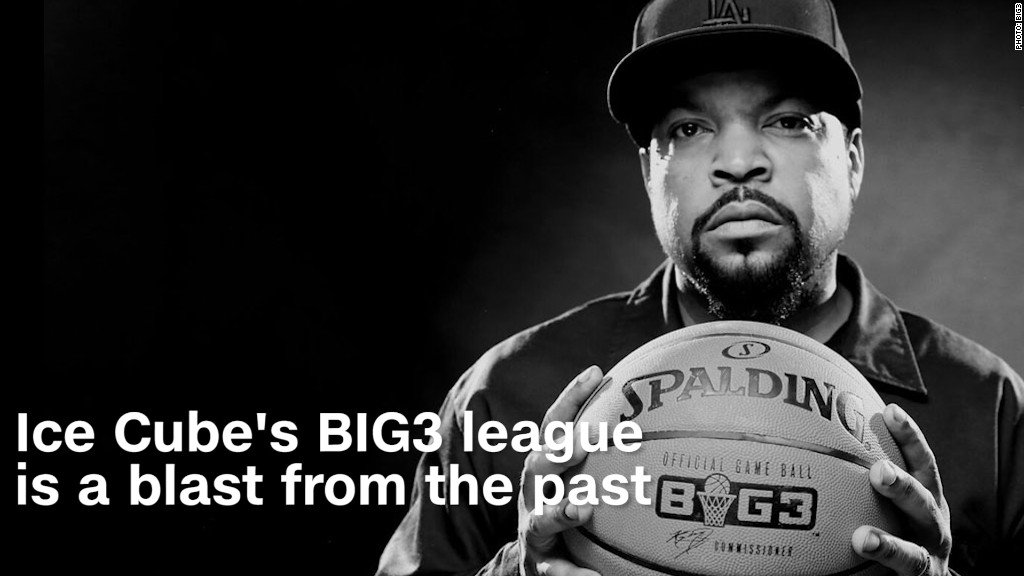 In the newest professional basketball league, the games are 3-on-3 and the stars are blasts from the past.

And it’s only in town for a day.

Big 3, a traveling summer league, is the brainchild of Ice Cube. It’s essentially a way for the rapper — and fans — to watch former NBA players handle the rock again. That includes Allen Iverson, Chauncey Billups and Mike Bibby, coached by stars like Dr. J, Clyde Drexler and Gary Payton.

Roger Mason Jr., the league commissioner, told CNNMoney he thought Ice Cube and his collaborator, entertainment executive Jeff Kwatinetz, were “nuts” when they proposed the idea. Now he can’t believe it hasn’t been done before.

“There’s a nostalgia there of a fan that watched those guys in the NBA,” Mason said. “There’s also a younger fan that competes and plays 3-on-3 out on the blacktop and that will be interested to see our guys play as well.”

Big 3 tips off June 25 with four short back-to-back games at Barclays Center in Brooklyn. One ticket covers all the games, and Mason said they’ll be affordable, starting at about $20 a seat. The league will play in 10 cities this season, including Chicago, Los Angeles and Tulsa, Oklahoma.

The rules are definitely different from the NBA: Big 3 will play on a half-court. The first team to 60 points wins the game, and halftime happens when one team gets to 30. Beyond the three-point arc are three circles where players can shoot four-pointers.

The players on the eight teams may be retired, but they’re not washed up. A combine and draft ensure that fans will get their money’s worth.

“There’s plenty of guys that actually continue to work out, that still work on their skills and their game,” Mason said. “Those are the guys that should be out there representing the league.”

For many of the players, it’s a chance to play in front of their children, who never knew them as active NBA stars.

For the fans, they get to see matchups that are new, and rivalries that are both new and old. The current teams are set, but Mason said the league is approaching newly retired players and getting interest. Maybe we haven’t seen the last of Tim Duncan and Kobe Bryant.

While the league is strictly former NBA players, Mason said at some point there may even be former WNBA players.

(One other bonus for the fans: Allen Iverson, back on the court as both a player and a coach. Yes, this is the same Iverson who delivered maybe the most famous rant in NBA history when reporters questioned his commitment to practice.)

The league may be arriving at just the right time. The International Olympic Committee just announced that 3-on-3 basketball will debut as an Olympic sport at the 2020 Summer Games in Tokyo. And 3-on-3 is already popular around the world: The NBA has its own Dew NBA 3X Tour, a touring league that showcases amateur players.