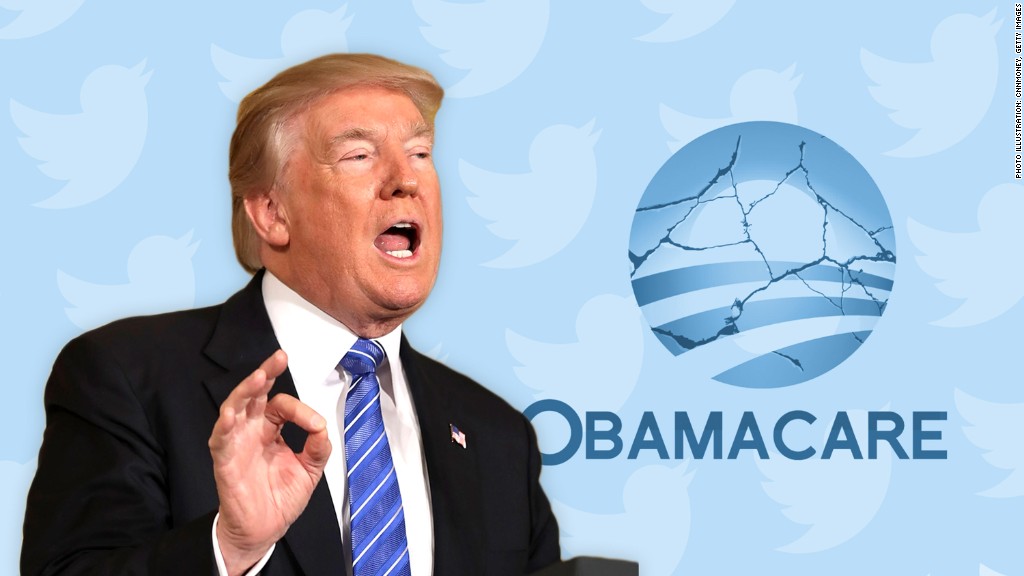 Insurers’ time and patience is running out.

They have waited months for the Trump administration to commit to paying a key set of Obamacare subsidies.

The president, however, continues to string them along, despite the pleas of carriers, doctors, governors and even Republican lawmakers.

He threatened twice this weekend via Twitter to end what he called “bailouts” for insurers.

If ObamaCare is hurting people, & it is, why shouldn’t it hurt the insurance companies & why should Congress not be paying what public pays?

Insurers rely on the subsidies, referred to as cost-sharing reduction payments, to lower the deductibles and co-pays of lower-income enrollees. The payments are at the center of a court battle between the House and the Trump administration, which inherited it from the Obama administration. President Trump has been paying them on a month-by-month basis.

The lack of this guarantee has many carriers reconsidering their plans to participate on the exchanges next year. On Wednesday, Molina Healthcare (MOH) became the latest insurer to downsize its involvement in the exchange, exiting Wisconsin and Utah and warning it may leave more markets depending in part on what happens in Washington D.C.

More moves may be on tap in coming weeks as key deadlines approach. Mark these dates on your calendar.

Carriers in the 39 states that use the federal marketplace, healthcare.gov, have to submit any final adjustments to their proposed 2018 rate requests by August 16.

Many insurers are already asking for hefty premium hikes amid the uncertainty over the cost-sharing subsidies and the Republicans’ desire to dismantle the Affordable Care Act.

California residents purchasing silver plans could see an average 12.4% surcharge — on top of an average 12.5% rate increase — if the cost-sharing subsidy issue remains unresolved. Molina is asking for a 55% rate hike in its remaining markets, but would ask for a 30% increase if the subsidies are funded.

After that, it will be too late to make any revisions, regardless of what happens in Washington, D.C. The requests must still be approved by state regulators, in most cases.

The White House has given mixed messages on when the president would make a decision about the subsidies. Trump Counselor Kellyanne Conway told Fox News on Sunday an announcement would be made this week, but a senior administration official said Wednesday that Trump is seeking guidance from the White House Counsel and Treasury Department’s legal office. The process is expected to take about two weeks, which would be right around August 16.

Insurers are scheduled to receive their next round of cost-sharing payments on August 21.

If Trump hasn’t announced a decision by then, all eyes will be on the administration to see whether the funding is sent.

This is D-day for insurers on the federal exchange.

It’s when they must sign contracts to participate in Obamacare next year.

Many insurers have already washed their hands of the marketplace, saying they don’t want to deal with the volatility anymore. Some of those remaining are raising the specter that they could leave more markets, adding to the 20 counties that are on track to have no insurers for next year.

Anthem, one of the largest carriers on the exchanges, said last week that it might further scale back its presence if it doesn’t get some certainty soon. It has already announced it is leaving three states and exiting much of the California market.

The head of Connecticut’s state-run exchange, James Wadleigh, told his board of directors on Wednesday that he fears the two insurers participating in Access Health CT might pull out for next year. That could leave more than 110,000 residents stranded.

State regulators are also growing increasingly concerned that they may see a mass exodus of insurers in coming weeks if the administration doesn’t agree to fund the cost-sharing payments, said Julie Mix McPeak, president-elect of the National Association of Insurance Commissioners.

“Without that, at the very least, we are going to be looking at significant premium increases, but we’re probably going to be seeing insurers leaving the market in very large numbers,” said McPeak, who runs Tennessee’s insurance department.