If you’re in the market for strong dividend stocks with growing payouts, look no further. Apple (NASDAQ: AAPL) and Procter & Gamble (NYSE: PG) are both market leaders that tend to raise their dividends annually. Even better, both companies are likely to announce dividend increases in April (or within the first few days of May).

Let’s take a close look at these two companies’ dividends, and the financials supporting them, and see why investors can expect a dividend increase this year. 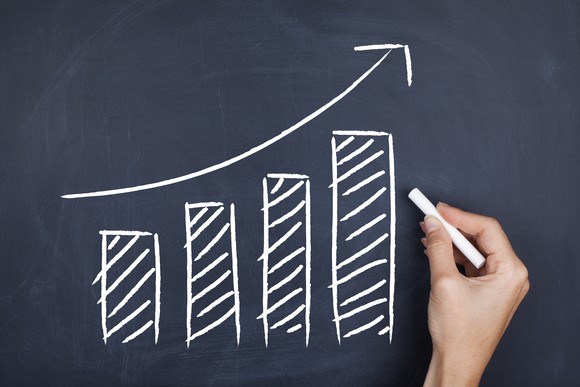 Apple announced its most recent dividend increase last year on May 2, boosting the dividend by 10.5% . The stock currently yields 1.4%.

With Apple’s payout growing at an average rate of 10.3% over the past three years, investors have good reason to expect another dividend increase this year. The case for another strong dividend increase improves when investors consider Apple’s extremely low payout ratio — the percentage of earnings Apple is paying out in dividends — of just 24%.

Though last year’s dividend increase was modest, investors should still expect another one in 2018. P&G management has prioritized the dividend for decades, boosting the payout for 61 consecutive years.

P&G’s underlying fundamentals look strong enough to continue supporting dividend increases. The payout ratio is 68%, leaving plenty of room for more dividend growth. And P&G also notably saw its operating income rise nicely in 2017 to $14 billion, from $13.4 billion in 2016. This increase was driven by an improved gross margin and reduced sales, general, and administrative costs.

Investors should look for an update on P&G’s dividend sometime in April.

Of course, paying dividends isn’t the only option for companies looking for ways to put excess free cash flow to use. Companies can indirectly return cash to shareholders by repurchasing shares — something both Apple and P&G regularly do. So Apple and P&G management will have to consider this potential trade-off when deciding how much to increase their dividends. But given both companies’ consistent histories of annual dividend increases, investors should expect dividend-increase announcements from both companies.

10 stocks we like better than Apple
When investing geniuses David and Tom Gardner have a stock tip, it can pay to listen. After all, the newsletter they have run for over a decade, Motley Fool Stock Advisor , has tripled the market.*